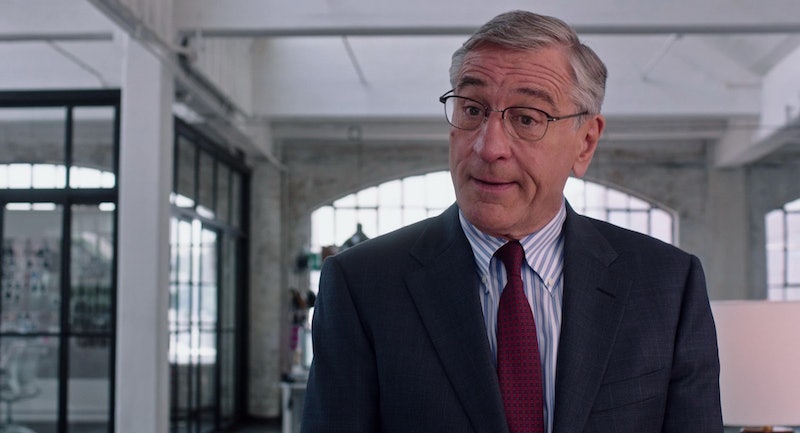 The new comedy The Intern features a seemingly outlandish premise: a 70-year-old retiree decides to start a new career and becomes the intern to the head of a hip online fashion magazine. Robert De Niro plays the intern while Anne Hathaway plays his boss, and the two of them navigate their way through today's modern office culture of sloppily dressed, social media-perusing millennials (at least that's the office culture in most movies, anyway). The situation is mostly played for laughs, albeit with a healthy dose of heartwarming life lessons tossed in, but how realistic is it? Can senior citizens actually be interns in corporate America?

In short, yes they can, but it's rare. Back in the latter half of President Clinton's second term in office, the United States Senate offered a Senior Citizen Internship Program, wherein anyone over 60 years old had the chance to work as a staffer under a U.S. Senator for two weeks. And while it doesn't look like the program still exists (sorry, De Niro), it may have inspired the types of internships available today. For instance, a lot of older adults are looking to change careers and finding that an internship is a sometimes necessary step in achieving that goal.

Deborah Mitchell, CEO and founder of Deborah Mitchell Media Associates, writes in Entrepreneur that when she desired a change in her career after 25 years in the television industry, she used an internship as a way to rebrand herself and quickly learn new skills, without having to invest the time and money into a new education. Companies, too, are now often looking beyond the typical college intern in an effort to bring in the best talent they can. The Guardian cites British ad agency BMB, who described 20 percent of their interns in 2012 as "mature."

A big reason stateside for the uptick in older interns was the economic downturn of 2008, which left a lot of Americans out of work and looking for fresh starts. Of the five million new jobs created in the U.S. between 2009 and 2013, a whopping 80 percent of them went to workers age 55 and over, and a number of them got into their new positions via (often unpaid) internships. It's gotten to the point where it can be argued that older Americans, staying in the workforce longer than in years past, are offering serious competition to recent college graduates when it comes to lower tier positions and internships.

And while interns in their 40s and 50s are one thing, what about interns in their 70s, like De Niro? Well, I know of at least one... sort of. 71-year-old advertising veteran Doug McKinlay interned at The Richards Group in 2013, claiming that he was most likely the world's oldest intern during that time. But McKinlay's internship was largely an experiment to see if what he was teaching as an advertising professor was still relevant in today's business culture; in other words, he was not looking to start a new career as many older interns are.

Basically, the reality is this: As long as an internship doesn't offer any kind of age restriction or college requirement, you can apply regardless of how old you are. A lot of companies still prefer to go with more traditional, 21-year-old interns, but more and more are accepting older people as a viable alternative. Especially if they happen to be Robert De Niro.

More like this
Which RHODubai Housewife Has The Biggest Net Worth?
By Hugh McIntyre
Drake’s Net Worth Will Have Critics Saying “Honestly, Nevermind”
By Hugh McIntyre
Charlotte Tilbury Muse Phoebe Dynevor Triples Her Income In One Year
By Catharina Cheung
'Strictly’s Karen Hauer Had A Good Reason To Keep Her Wedding Under Wraps
By Maxine Harrison and Frances Stewart
Get Even More From Bustle — Sign Up For The Newsletter