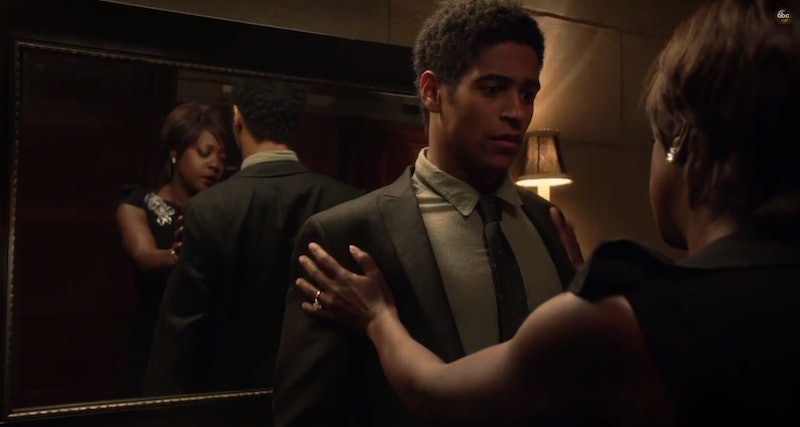 Guys, what even was that How To Get Away With Murder Season 2 premiere? SO MUCH HAPPENED. Like, um, Wes might have shot Annalise, and I want to know why. Of course, I'm sure we won't find out the story behind that crazy cliffhanger until, like, the Season 2 finale, but that's not going to stop me from speculating anyway. Here's what we know:

The last time we see Wes and Annalise together they're smiling and dancing together. Then, the show flashes forward two months where we hear a gunshot come from inside a mansion. Then, we see Wes walking away from the house, only to have the camera pan inside to a bloody Annalise, who is barely breathing.

Obviously viewers are supposed to take away from this that Wes tried to kill Annalise. I mean, I don't trust anything on this show — nothing is ever as it seems at first. But, for argument's sake, if Wes did shoot Annalise, why did he? Well, it probably doesn't have to do with Rebecca, surprisingly enough. I mean, true, in the premiere he was mad at Annalise for seemingly lying to him about Rebecca's whereabouts. He seemed to know she was dead and not at a motel like Annalise claimed. But, the Annalise voiceover for that final scene makes me think it wasn't about Rebecca, but rather, it was about Wes and Annalise's own relationship.

As the camera pans over her bloody body we hear a voiceover of Annalise explaining to her class that statistically, if you're murdered, it's likely by a "friend, an acquaintance, or your lover." Judging by Wes and Annalise's friendly dancing a couple of months before the shooting, I'm going to speculate that in those next two months they strike up a romance. There's been weird sexual tension around them FOREVER. But, obviously, whatever romance they try out doesn't go well.

What could Annalise have possibly done to deserve an (alleged, I don't believe he's capable of two murders in two seasons) shooting at Wes' hands? I don't know, but I'm sure we're going to have to wait awhile to find out.

In the meantime, for some happier images, watch Bustle drunkenly recap the shenanigans of Season 1.