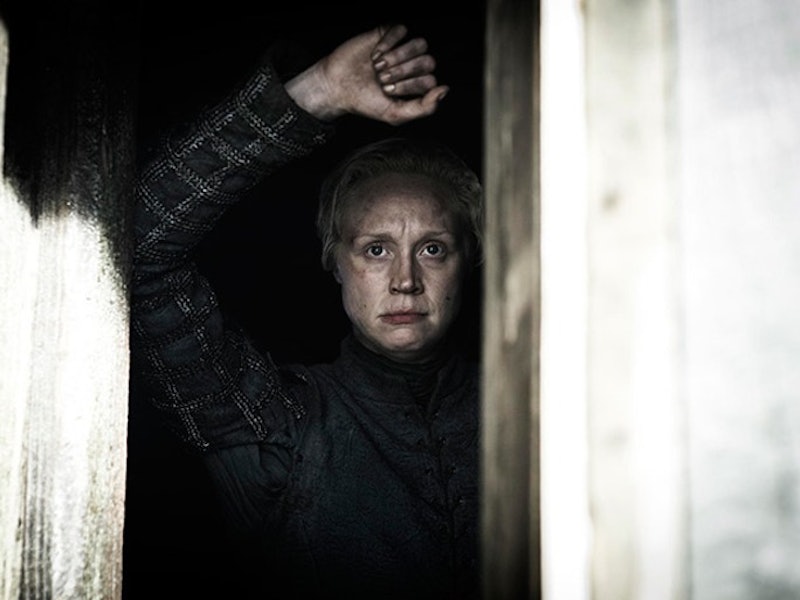 Every Game of Thrones fan has a favorite character, and mine happens to be Brienne of Tarth. Sure, with so many characters populating the world of Westeros and beyond, it's not possible for every single one of them to be a key player — but I believe Brienne has an important role to play in the final chapters of the series. My Lady of Tarth is not cannon fodder or just a noble-hearted soul in a bleak world. She has a purpose, and I have reason to suspect it is bigger than anyone could anticipate.

Season 5 saw Brienne staring at a window waiting for a candle to be lit for far too long — but, thankfully, it has already been confirmed Brienne will have a larger role to play in Season 6. So, what could possibly be ahead for Brienne that could bring about not only an increased role, but also an importance to the overall story?

Simple. I believe the sword Brienne is carrying, dubbed Oathkeeper, a sword forged from Ned Stark's Valyrian steel sword Ice, is destined to be the most famed sword in the entire story: the Lightbringer. For those who need a refresher, Lightbringer is the legendary flaming sword forged by Azor Ahai. The person who wields it will be Azor Ahai reborn, aka, the person destined to fight off the coming darkness. Now, I don't think Brienne is Azor Ahai reborn (that would be cool, though), but I do believe she is destined to get Lightbringer into the right hands.

That is, Jon Snow's.

Since her story began, Brienne has been intrinsically linked to the Starks. She swore an oath to Lady Catelyn that she would bring her daughters back to her, and, in an effort to keep that promise to the new deceased Catelyn (may she rest in peace), Brienne has been working overtime to save Arya and Sansa. All the while, she has been carrying Ned's sword on her hip, which was a gift from Jaime meant to allow her to save Ned's daughters with his own sword. The symmetry would be beautiful — but I suspect there is more to Oathkeeper than meets the eye.

The Lightbringer prophecy states a warrior will draw the sword from a fire, and the warrior will be Azor Ahai reborn. Since the return of Jon Snow is so likely, it stands to reason Jon is destined to fulfill the prophecy. In a Season 6 set photo, for instance, an actor who looks so much like Kit Harington, it's probably Kit Harington, is seen carrying a sword that does not appear to be Longclaw. If this is Harington's return as Jon, could it be that Brienne and Jon meet in the North and she returns his father's (or uncle's, if R+L=J is true) sword to him?

That's one way the transfer could go down... but a clue from the books hints of another answer.

Though we don't see it in GoT (it would have taken place around Season 3), the books feature a pivotal dream Jaime has about Brienne. It is his dream that prompts him to return to Harrenhal for Brienne. In the dream, Jaime finds himself in a dark cave facing seven people from his past (all of whom are presently dead aside from Cersei, so make of that what you will). Brienne appears in the cave beside him and is his only defense against the darkness. Only their swords light the cave. Here's a snippet of the scene from A Song of Swords:

Brienne’s sword took flame as well, burning silvery blue. The darkness retreated a little more. “The flames will burn so long as you live,” he heard Cersei call. “When they die, so must you.”

“Sister!” he shouted. “Stay with me. Stay!” There was no reply but the soft sound of retreating footsteps. Brienne moved her longsword back and forth, watching the silvery flames shift and shimmer. Beneath her feet, a reflection of the burning blade shone on the surface of the flat black water.

Brienne is literally holding a flaming sword in a scene that also features the ghost of the all-important Rhaegar Targaryen, who also happens to be the "R" in the R+L=J theory. Is it all just a crazy coincidence? I don't think so. Martin is not big on coincidences — and even though the dream wasn't depicted on the show that doesn't mean the show isn't planning on course-correcting Brienne and Jaime's stories enough to bring them together again.

I cannot think of a warrior on GoT with a truer heart than Brienne. Having her be the person carrying Lightbringer would be fitting — and having her hand it over to its rightful owner would only make it more so. I believe Brienne's ultimate journey is tied to Jaime and the Starks. She has a role to play in the coming war against the Wights, and it might end up costing her everything, but in the process she might just get her big damn hero moment thanks to a legendary sword hiding in plain sight.