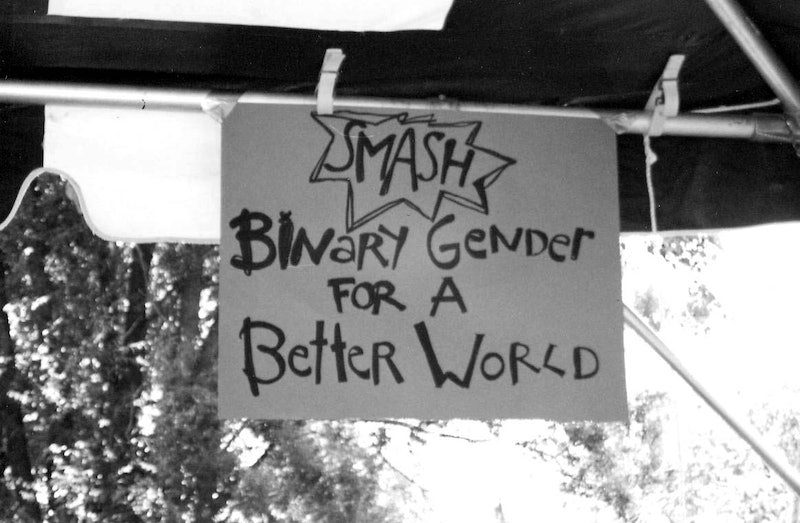 While Halloween carries pressure for many women to dress up in the most sexually alluring getups they can find, there are also plenty of feminist Halloween costume ideas out there for those who aim to use the holiday to make a statement. Not that these two objectives are mutually exclusive — you can make a powerful statement about slut-shaming while scantily clad (more on that later). So if you're looking to make All Hallows Eve a pro-gender-equality occasion, you can dress as your favorite feminist celebrity, lady-nerd, or powerful woman in history. Or, you could get more abstract. That's where these feminist theory-inspired costumes come in.

As a complete gender theory nerd, I think about intersectionality, the male gaze, and other concepts applicable to gender politics on a regular basis, but I haven't hitherto quite been able to figure out how to visually represent these ideas. Finally, though, I've sat down and brainstormed ways for feminists to bring the thoughts that keep them up at night to their Halloween parties (and trick-or-treating trips, because you're never too old). Here are a few suggestions for making Halloween an intellectual celebration of feminism.

The term "gender binary" describes not just how we're pressured to live and identify as men or women but also how certain traits are assigned to each group — for example, beauty, emotionality, and nurturing are considered feminine traits, while aggression, logic, and strength are considered masculine traits. Feminists have challenged the gender binary because it forces us to repress half of our personalities and usually denigrates characteristics deemed feminine.

There are a few different ways to represent the gender binary. You could wear half pink and half blue, do your makeup to create a half-male, half-female face (one side with lipstick and mascara, one with a beard drawn on), and/or copy this binary Halloween costume incorporating the computer science concept but with male and female symbols instead of zeros and ones.

Slut-shaming is exactly what it sounds like: Making someone (usually a woman) feel guilty for wearing revealing clothing or openly enjoying sex — and Halloween has become a prime night for it. While the idea that women gain their worth through their ability to sexually arouse or please men (see "objectification") is problematic, women have the right to wear revealing clothing without being objectified. If you want your "slutty" costume to have a message, you can take inspiration from makeup artist Jordan Hanz and write words like "slut" and "asking for it" on the parts of your body that your costume leaves bare.

Intersectionality is the idea that you cannot talk about gender, race, class, ability status, size, sexual orientation, or any other facet of identity without also discussing other categories used to oppress people. For example, when discussing the wage gap, it's important to acknowledge that women of color make even less money for the same work than white women.

One way to represent intersectionality is to create a paper chain with terms like "gender identity" and "neurodiversity" written on each link and drape it over yourself. Intersectionality can also be a group costume, with different terms written on each person or their clothing and everyone holding hands or linking arms throughout the night.

"The male gaze" is a term that originated in feminist film theory, when scholar Laura Mulvey described how objectification of and violence toward women on-screen stems from castration anxiety. But the common usage of the term contains far less psychoanalysis. These days, it's typically used to describe the intended viewer of ads, shows, and movies that sexualize women. If a commercial is tailored toward the male gaze, for example, it may contain women in bikinis to sell a car or some other unrelated product.

The costume pictured above, created by feminist filmmaker Cheryl Furjanic, uses a visual pun to create a "mail gaze." If you'd like to make your "male gaze" glasses more literal, you can collage them using cut-outs of women from magazines. Or, you can dress as a man with a huge eye on your shirt or otherwise attached to your body (this Magritte-inspired "Eye'm Watching You" shirt is very male-gaze-y).

In order to cater to the male gaze, women's bodies are often made into objects. The strategy of blending women's bodies with beer bottles, foods, and other products being advertised makes the process of objectification literal, but a woman is objectified any time she is viewed as a mere instrument for someone else's pleasure. Objectification contributes to rape culture by deeming women objects of men's desires rather than people who possess their own desires and may or may not want to please someone else.

A costume symbolizing objectification can transpose household objects, food, or drinks onto your own body parts — for example, pieces of fruit on your chest or hamburger buns on your butt. A google image search for "examples of objectification" can give you some inspiration because these outfits already exist in real life; they just haven't been widely used for Halloween costumes since they're way too real.

The Madonna-whore complex refers to the classification of women as either nonsexual, innocent virgins or dirty, promiscuous "whores." It can also refer to the related difficulty for certain men to be sexually attracted to women they also see as potential (or current) wives or mothers of their children. This trope contributes to slut-shaming by devaluing women who are openly sexual; some may feel it is worse to sexually assault a virgin, for example, because she has more to lose. It also prevents women from being viewed as multi-faceted people who can be open about their sexualities and still respected as mothers, coworkers, and all the other roles women can play.

A Madonna-whore complex costume can literally incorporate clothing worn by the Madonna (warning: this costume is not religiously PC), like the cape or headpiece, along with lingerie or other sexy garments.

Being body-positive means loving and appreciating human bodies regardless of whether they adhere to societal prescriptions for what a body should look like. According to this philosophy, beauty ideals are made up anyway, so why not make up your own in your favor? Not to mention, these ideals are often constructed with sexist, cissexist, and racist considerations in mind, which is all the more reason to challenge them.

This one is easy: Remember those stickers your teachers used to congratulate students on a job well done? Why not put gold stars, thumbs up, and A+s all over your body to demonstrate your approval?

A microaggression are subtle actions that are not intended to be oppressive, but which nevertheless encourage stereotypes, silence a marginalized group, or reinforce social hierarchies. The Microaggressions Project collects anecdotes about microaggressions people experience on a day-to-day basis; a few include asking a white mother if a black child is hers, wearing a shirt with a sexist slogan, and telling someone with a same-sex significant other that she's just experimenting.

Try writing some of these stories on pieces of paper and stick them to your clothing. People might ask you what they all have in common — which is when you get the chance to explain what microaggressions are.

More like this
Wimbledon Alters All-White Kit Rule Amid Candid Period Discussions
By Catharina Cheung and Rachel Mantock
10 Thanksgiving Alternatives You Can Celebrate This Month
By Katie Mitchell
Iran Has Issued A Death Sentence Over Mahsa Amini Protests
By Catharina Cheung, Darshita Goyal and Maxine Harrison
Amanda Gorman Shared A Powerful Message On Meghan Markle’s Penultimate Podcast
By Darshita Goyal
Get Even More From Bustle — Sign Up For The Newsletter