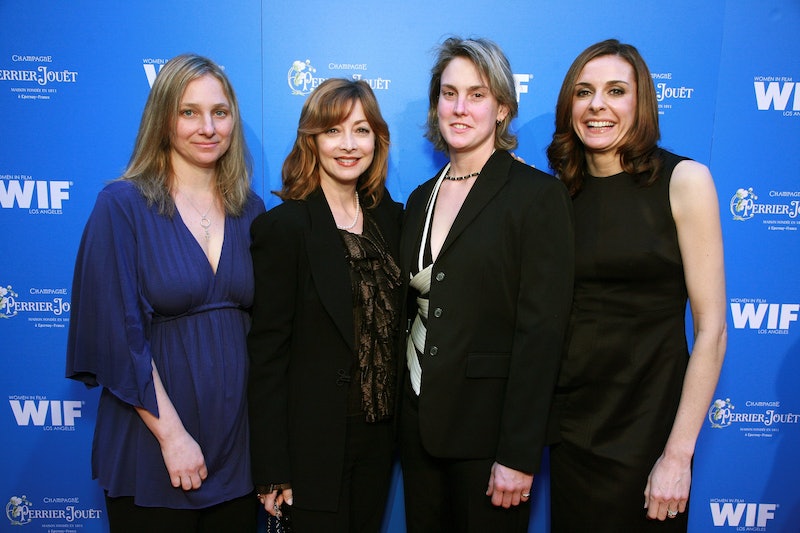 The new film Freeheld is based on the true-life story of Laurel Hester, a gay police officer who fought to have her pension benefits transferred to her partner after she was diagnosed with terminal cancer. Julianne Moore plays Hester in the film, and Ellen Page plays her partner Stacie Andree. Page has said that starring in the movie and playing Andree are hugely significant to her, especially since the actress came out as a lesbian last year at the Human Rights Campaign's Time to Thrive conference. So clearly, what Stacie Andree thinks about Freeheld and her portrayal by Page matters — but does the film do well by its inspiration?

Although Andree hasn't made any formal public statements regarding her opinion on the project, her actions imply that she approves of the film. According to ScreenDaily, Page spoke at the Zurich Film Festival about how Andree was supportive of the production. She worked with Page as well as director Peter Sollett and screenwriter Ron Nyswaner, and the creative team valued her opinion. Said Page, “We just wanted to make her feel safe and that we’d make the most authentic, truthful thing we possibly could. She was the most valuable asset to tell this story."

In addition to being present during part of the production and lending her story, Andree has demonstrated her support for the film in other ways, such as when:

Although it can't be 100% confirmed that it's her, a Twitter account under the name of Stacie Andree has tweeted many supportive posts about the movie. On Sept. 14, she posted a tweet thanking the film as well as Miley Cyrus and Linda Perry. This is a reference to the fact that the Freeheld trailer song, "Hands of Love", was written by Perry and performed by Cyrus. The account has also retweeted many posts from the official Freeheld Twitter, as well as reviews of the movie and promotional materials.

She Made It To The Premiere

Andree attended the film's premiere and posed with cast members on the red carpet before the actual screening.

She Got Close With The Cast

Ellen Page told Time, "Stacie was so kind to Julie and me. I spent an afternoon with her. Needless to say, it was emotionally intense and hard for her to talk about these things, but her willingness to talk was really beautiful and generous." Andree also showed support for cast members off-set — on the night of the 2015 Academy Awards, the Stacie Andree Twitter account sent a direct tweet to nominees Julianne Moore and Steve Carell wishing them luck.

The story of Freeheld is a tragic but important one, and the fact that Andree supports the film makes it even more powerful. Although Laurel Hester is now gone, the film, and those who helped get it made, ensure that her legacy will live on in history.

More like this
You Definitely Know The Voice Of Shuri's AI In 'Black Panther: Wakanda Forever'
By Brad Witter
Keke Palmer Finally Showed Angela Bassett Her Famous Impression Of Her
By Stephanie Topacio Long
Amanda Gorman Shared A Powerful Message On Meghan Markle’s Penultimate Podcast
By Darshita Goyal
Jodie Turner-Smith & Joshua Jackson's Relationship Timeline Includes Her Proposing
By Jake Viswanath
Get Even More From Bustle — Sign Up For The Newsletter