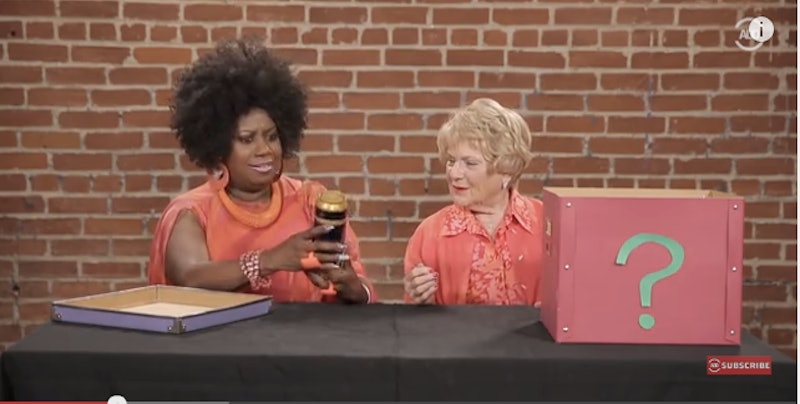 Some genius walks among us. Whoever decided to film old people looking at Fleshlights for the first time is my spirit animal and I can only thank them for making the world a better place. Or at the very least, a place where you get to see your favorite sex toy in a whole new light. Basically, the people at All Def Digital took two adorable old ladies and three old men and made a video of old people discovering sex toys for the first time. And it's maybe the best thing I've ever seen.

Although all of the participants are amazing, special shout out to "Honest John" (his actual name, according to him). Usually you only find an old man called Honest John wearing a tie dye t-shirt if he's your uncle's friend trying tell sell you oregano he swears is weed ("Would Honest John Lie to you!?"), but seeing him out of his natural habitat is all the more fun.

See how happy they are?

Here are my favorite moments:

1. This Is Honest John

You see this man? I would trust this man with my life. He explains the sex toys of yore: "For women, it was a stick. For men, it a was vacuum cleaner." I believe you, Honest John, I will always believe you.

The "Lady Lager" packaging was initially baffling to these three naive souls.

Rhonda, however, is no fool.

Myles on the right kept complaining about the shortness of the can. We get it, Myles, you're a well-endowed fellow.

Deloor was a fan. He said "You gotta get up in there." and then proceeded to do just that.

6. "Could you imagine taking this to people at the church?"

Rhonda and Joyce have plans afoot.

7. "People will just think you brought a drink with you and won't know what a pervy motherf*cker you are."

Honest John is a fountain of wisdom.

And Deloor is a poet.

Rhonda knew what was what for the second toy.

10. "I thought it was somebody who never had sex before."

Joyce did not, and Rhonda was unimpressed.

They were very into the third toy, modeled after an actual woman's vagina.

In the end, Joyce and Rhonda had a lovely time. And the men clearly enjoyed it (I'm looking at you, Deloor).

Want more of Bustle's Sex and Relationships coverage? Watch us guess what these sex toys are:

More like this
Help! My Partner Only Wants Sex Late At Night & Won’t Compromise
By Sophia Benoit
Ask A Sex Therapist: Is My Sex Fantasy Normal?
By Madison Malone Kircher
23 Abortion Funds In States With Trigger Bans To Donate To
By Emma Carey
What Mercury Retrograde Spring 2022 Means For Your Sign's Sex Life
By Nina Kahn
Get Even More From Bustle — Sign Up For The Newsletter