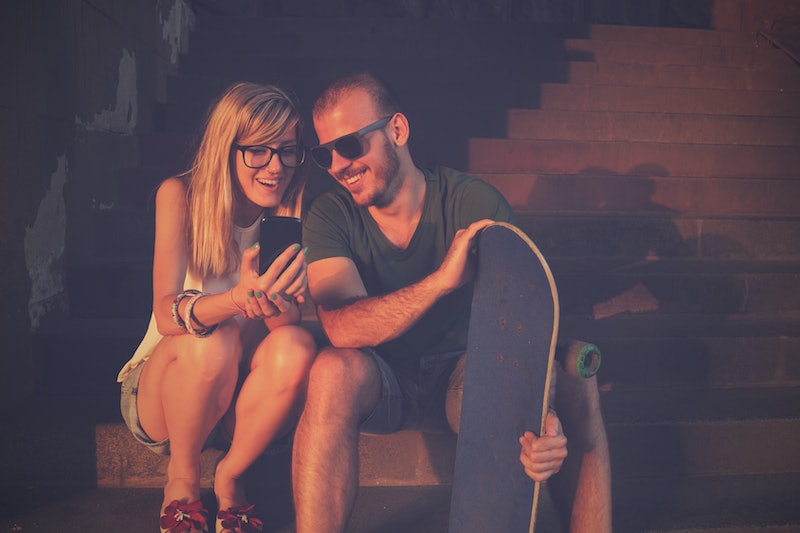 You know what's ruining your sleep, your grammar, and your relationship? I hope you're not reading this on your phone. A new study from Baylor University shows that cell phones are damaging our relationships and contributing to depression. Consisting of two surveys of 453 people, Baylor looked at pphubbing, or "partner phone snubbing." And you probably do it. Even the title of the study should sound familiar: "My life has become a major distraction from my cellphone: Partner pphubbing and relationship satisfaction among romantic partners." Does that title evoke a twinge of guilt? Well then, it's time to put the phone down.

The thing is, this isn't just about being on your phone around a partner. Or a phone interrupting. They used the first survey to create a list of common "pphubbing" behaviors, including "my partner places his or her cellphone where they can see it when we are together" and "my partner keeps his or her cellphone in their hand when he or she is with me." I totally know the threat of the looming cell phone. It makes it feel like the person you're with is waiting for something better to happen. It's kind of gross, and it's also bad for your relationship. 46.3 percent of respondents had been pphubbed, and 22.6 percent said it created relationship conflict. According to the authors:

... our findings suggest that the more often a couple's time spent together is interrupted by one individual attending to his/her cellphone, the less likely it is that the other individual is satisfied in the overall relationship. Specifically, momentary distractions by one's cellphone during time spent with a significant other likely lowers the significant other's satisfaction with their relationship, and could lead to enhanced feelings of depression and lower well-being of that individual.

Yikes. Need more proof? Here are three other ways science says you need to put down the phone to save your relationship.

1. You're Missing Out On Quality Bed Time

Since 75 percent of couples go to sleep at different times, that means you're losing out on some very important sex / cuddling / general bonding time. Why? Your phone. And the work emails attached. Time to ditch them.

2. You're Texting Instead Of Sexing

One British survey showed that 40 percent of people had put off sex for texting. Even worse (are you ready for this), one third of participants had answered the phone during sex. The phone. During sex. The little black stone where my heart should be is weeping.

All that time clicking away on Facebook and Twitter? You may be stirring up drama without even realizing it. You know that stalking your ex online is only digging yourself a hole of woe, but did you know that Facebook now crops up a lot in divorces? Up to a third of divorce cases now refer to Facebook. So put the phone down and get back in the damn bed.