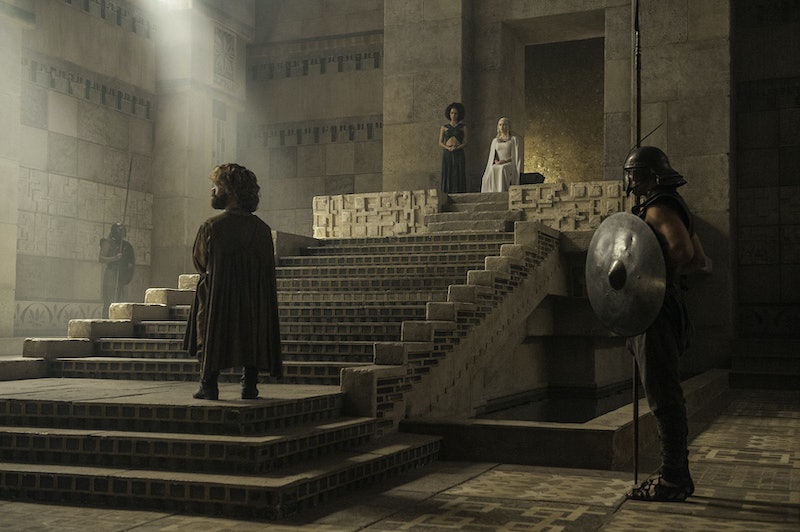 Game Of Thrones has never been more successful. It shattered the record for most trophies won by a program in a single year. The Season 5 finale broke the show's own ratings record, making Thrones the second-most-watched show on cable behind only AMC's The Walking Dead. So, basically, there has never been a more perfect moment for showrunners David Benioff & D.B. Weiss to transfer their property to the big screen. And, if rumors are to be believed, they're considering just such a proposition. Could a Game Of Thrones movie be on the horizon?

The rumor, which has been spreading across the Internet like wildfire over the past several days, appears to have originated on UK news site Daily Star. "Exclusive: Game Of Thrones to be turned into a blockbuster movie," a headline posted last Sunday declared. Their source? George R.R. Martin himself, who they reportedly interviewed after the Emmys. "Speaking at the HBO afterparty, author Martin said he will not be involved in the film and that show writers David Benioff and DB Weiss will be in charge." The article quotes Martin:

I have too much to do. That is something HBO and D.B. and David are dealing with. I have two more books to finish and I still have so much to do. The pressure is on. I am such a slow writer and the fans get upset that I don’t write faster.

An anonymous "production insider" is also cited as having said the following:

With the Game Of Thrones universe there is much rich material and no constraints on when that story will take place. They are looking at dipping back in time during certain periods of the series, which could be examined as a one-off plot. That means that some of the big characters who fans have seen die on screen could be resurrected such as Robb Stark, Catelyn Stark, Oberyn Martell The Red Viper — and Ned Stark. George has written about a raft of other characters in the books, which have been as long as 1,200 pages. Some of those could be used for a completely separate idea and plot. George has created such an expansive universe of characters over 8,000 years of history, the possibilities are endless.

Before you hurry off to get in line for tickets at your local cinema's box office, let's examine the veracity of these claims. There's no way to prove whether or not an anonymous source really said those things, but what about Martin? On Tuesday evening, Martin took to his own Live Journal to dispel the rumors, replying to a fan's inquiry, "Yes, completely false. No one is working on any movie just now."

Interestingly, this isn't the first time rumors of a Thrones movie have been bandied about. In March of 2014, shortly before Season 4 premiered, Martin himself raised the possibility. In an interview with Vanity Fair, he discussed the fact that the show was catching up to his unfinished series of novels, and suggested the possibility of the show stalling by taking a year off between seasons to air a spinoff instead. "Spartacus went back and told a prequel season. That’s also an option. We have prequel. We have the Dunk and Egg novellas, which take place a hundred years before. And I’ve just published The Princess and the Queen, which takes place two hundred years before. So there’s lots of Westeros material out there, if we want to keep doing Westeros projects, but not necessarily [Game Of Thrones]."

While Martin didn't clarify at the time whether he envisioned these potential prequels as TV shows or movies, he mentioned in another interview five days later, this time with The Hollywood Reporter, that the Dunk and Egg novellas, "could be the basis for [a film]. I have written these three stories, and I have about a dozen more." He also stated that it was his personal belief that a cinema-sized screen would be required to bring his saga to a proper conclusion. "The books get bigger and bigger [in scope]. It might need a feature to tie things up, something with a feature budget, like $100 million for two hours. Those dragons get real big, you know."

While the idea of Game Of Thrones airing every other year in tandem with a series of feature film spinoffs is certainly a unique one, it's an idea that never came to pass. Benioff & Weiss showed no mercy, plowing forward in their adaptation and catching up with Martin's books at the end of last season. But the author can take solace in the fact that his desire to see his work on the big screen has already come to pass. In January of this year, in anticipation of the Season 5 premiere, HBO aired the final two episodes of Season 4 ("The Watchers On The Wall" and "The Children") in theaters as a two-hour IMAX event, becoming the first television series in history to screen in the larger-than-life format.

Right now, HBO seems content to focus on finishing up Thrones in its current incarnation — which seems likely to wrap up with Season 8. While we probably won't see any Westerosi movies before then, that doesn't rule out the possibility of the network continuing its most successful brand on the big screen afterwards. After all, Thrones wouldn't be the first HBO property to receive the feature film treatment: Sex And The City and Entourage have both transitioned from the television to the cinema, and rumblings of a Deadwood movie have persisted. So a Game Of Thrones movie certainly isn't out of the realm of possibility. Let's all just promise to wait for actual facts before getting too excited next time, OK?