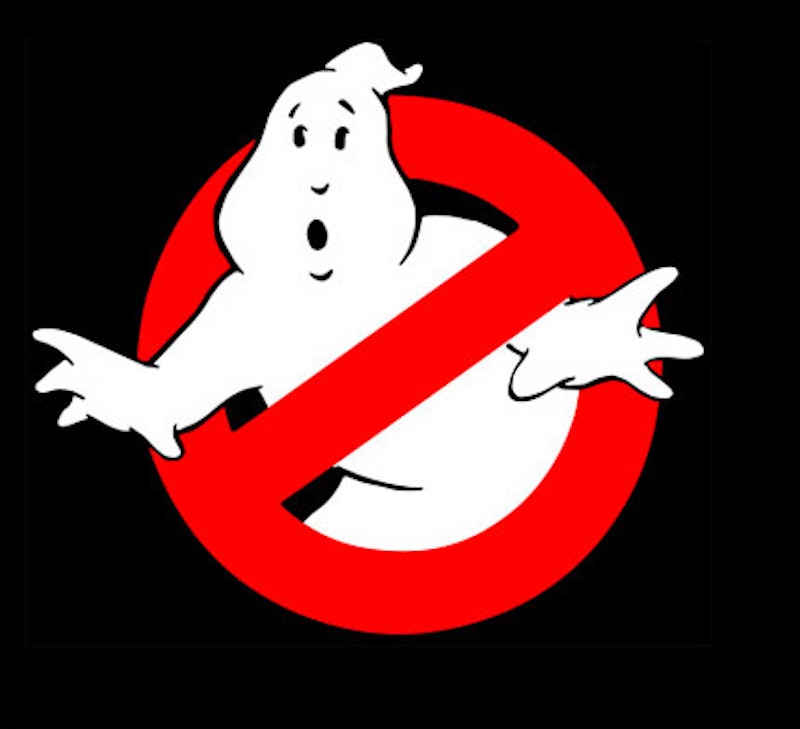 With October on the horizon, it's time to start thinking about who you want to be — for Halloween, that is. Yes, the torturous time to pick a Halloween costume is upon us. Should you go with the old standbys — a black cat, a bunny, a witch? Or maybe something political like Donald Trump's hair or Kim Davis? Or pop culture inspired, like Scream Queens or The Martian? No, this year, I'm thinking something fun, feminist and devastatingly cool: Ghostbusters. With the Ghostbusters reboot on the horizon, who better to emulate on Halloween than funny ladies Leslie Jones, Melissa McCarthy, Kristen Wiig and Kate McKinnon? Not only will a group Ghostbusters Halloween costume be the perfect choice for you and your friends, the fact that this female-reboot is based on a movie with a male-dominated cast also leaves the door open for a fun co-ed costume idea that doesn't involve pants for boys and miniskirts for girls. Gone are the days of "sexy" female Ghostbusters costumes, and it's about damn time. Here's how you can get the perfect Ghostbusters costume this Halloween.

If you are desperate for an official Ghostbusters costume, you're probably going to spend at least $40 buying a jumpsuit complete with a Ghostbusters patch and tools. Even if you don't want to spring for a manufactured costume, getting together the materials to create a convincing Ghostbusters costume will cost you some cash. This is for serious Halloween-ers only. So, if you're ready, grab your squad and pool your resources — it's time to bust some ghosts.

Great, now that the soundtrack is set, decide on your budget. If you're willing to spend money, and don't have a neutral colored jumpsuit, a quick and easy way to get a Ghostbusters costume is, well, to buy a Ghostbusters costume at your local party store or Amazon. Fair warning: the Ghostbusters costumes for women tend to be sexist and should be avoided. I love heels as much as the next girl, but stilettos can't even be used as a weapon against ghosts like they can against people. SMH.

A Neutral Jumpsuit Is Your Best Friend

Now, if you want a DIY option, your best bet is probably to either spring for a tan/neutral-colored jumpsuit, like this one from Forever 21 ($32.90).

Give It The Ghostbusters Edge

Ghostbusters patches are easy enough to get (you can buy one on Amazon for just $3), so, all you need is a piece of shirt-like apparel, a needle, and thread and you're good to go.

Of course, as with any costume, the devil is in the details. In the new Ghostbusters, the traditional Ghostbusters uniform has been updated with a some bright orange flair around the chest and on the shoes. If you've got a steady hand, try recreating the look with orange duct tape (about three bucks on Amazon), placing a few lines around your top, and then over your shoes. This tool is not only cost effective, but it can also be used to fake those impressive black boots.

Now for the tough part: accessories — aka what separates the Halloween amateurs from the masters of disguise. Ghostbusters are known for their insane, DIY, ghost-busting guns and fans. It's an elaborate set-up that looks nearly impossible to replicate (not to mention, heavy.) An easy way to get around the pack: ditch it. But, if you want to be as authentic as possible, then grab a (preferably black) backpack (Target has one for $24.99) and sling that thing on. Feel free to add a plastic piping (Amazon has a wide selection, though this stuff is a little pricey) or a vacuum hose (go to Home Depot for this and it's about $17 bucks so it's a little more economical) to make it even more elaborate. Feel free to attach with duct tape, to get the homemade look going.

What makes Ghostbusters a fun squad costume is that you don't all have to look alike. You can be as diverse and big a group as you want — who says there has to be only four Ghostbusters? Plus, you can all accessorize with fun glasses, à la Kate McKinnon (these ones on Amazon are intense, but they work):

More like this
Jennifer Lopez Found The Perfect Ben Affleck Throwback Video For Mother’s Day
By Stephanie Topacio Long
Ryan Reynolds’ Mom Hilariously Tests His Patience In A Mother’s Day Video
By Brad Witter
Watch The Dramatic First Trailer For Netflix's Jennifer Lopez Documentary
By Alyssa Lapid
What Does Doctor Strange’s Third Eye Mean?
By Arya Roshanian
Get Even More From Bustle — Sign Up For The Newsletter