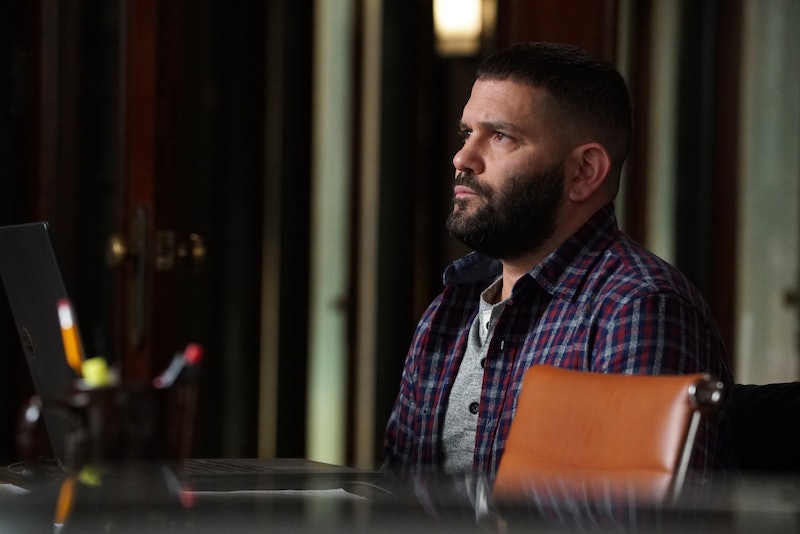 Where in the world was Jake Ballard in the Season 5 premiere of Scandal ? I know we got a glimpse of him in the final moments of the episode, but that's not enough. That's never enough. Jake's appearance on Scandal was not only short-lived, but it left viewers with a few questions. Most importantly, why does Huck need Jake's help? We don't know the exact answer to that question now, but it shouldn't be too long until the pieces of the puzzle of what Jake and Huck are working on comes together.

Huck and Jake both had different storylines in the Season 5 premiere. Huck sat in Olivia's apartment, as one does, tortured and alone. Jake didn't have a storyline. Filling in the blanks, I think he probably found out that How to Get Away with Murder just hit Netflix and allowed himself quite a few personal days to indulge. But the penultimate moments in the episode suggested that there was something that would bring Huck and Jake together, in crisis. Huck knocked on Jake's door, Jake answered, Huck said he needs Jake's help, Jake said "come in," and the door was closed. That's it. That's all we were given clue-wise for this mystery.

So what is it that Huck needs help with?

I can't imagine Huck doing something that would hurt/damage Olivia, but he's a lost soul right now. He might have seen his actions as helping her in the long run. Why he would turn to Jake, Olivia's ex-lover and the President's frenemy, is beyond me. Another option is that Huck knows who handed over the videos, and wants Jake's help to take them down.

Since Huck is basically ~fLyIn' SoLo~ nowadays, he might have gotten in too deep in some job he was working. Perhaps this is all about the jurors that Huck killed.

Huck Wants Jake's Advice For Getting Back To A Normal Life

Even though Jake is still in deep, there's no denying that Huck is the most "damaged" to come out of B613. Huck wants to be with his family, but his past has stopped him time and time again. Jake could be the one to help him turn over a new leaf.

Jake Gave The Tapes To Sally, And Huck Knows

Jake loves Olivia, but Olivia is with Fitz. If Jake was the one that hacked into the White House cameras and delivered the video footage outing Olitz to the public, Huck might want to get revenge. It's kind of a stretch, but it wouldn't be the first time Huck surprised us.

More like this
This 'Anatomy Of A Scandal' Star Has Joined The 'Bridgerton' Family
By Sam Ramsden
'This Is Us' Just Gave New Meaning To Jack's Death & His Love Story With Rebecca
By Grace Wehniainen
'Who Killed Sara?' Won’t Return For Season 4
By Brad Witter
Everything To Know About A Million Little Things' Reported Final Season
By Brad Witter
Get Even More From Bustle — Sign Up For The Newsletter