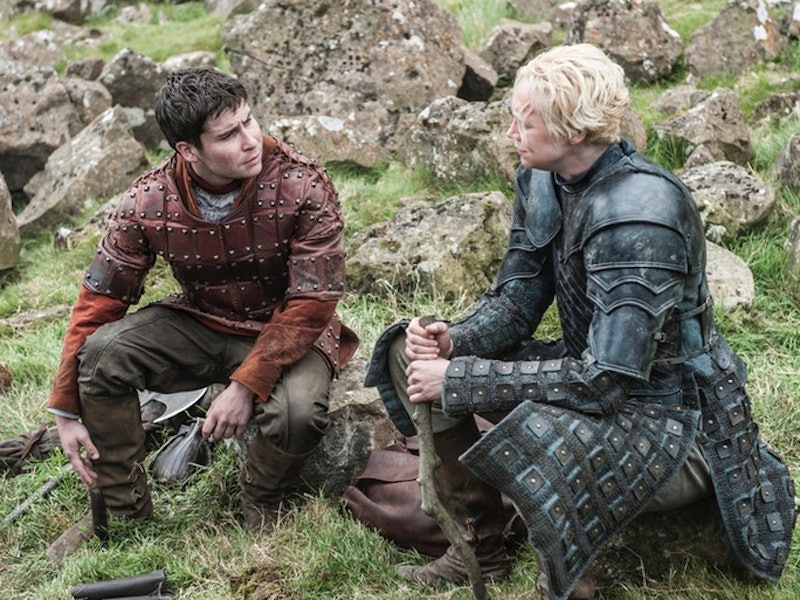 Game Of Thrones, where art thou? Sadly, still far, far off into the future: Season 6 of the Game Of Thrones doesn't premiere until next April. Sigh, April is the cruelest month, as T. S. Eliot so famously noted in his poem, The Waste Land — and now I finally understand what he meant. It's still so long before we get to see our favorite characters again, and after Season 5 — which was was particularly brutal to Westero's most beloved — all I really want is to see them again and make sure they're all OK. But, even with so many dead (or is he? You know who I mean), there are still, like, a billion people vying for the Iron Throne. Naturally, that means not all of the great characters in Westeros get as much screen time as the others — but some of them definitely earned more scenes than they've been given.

Game Of Thrones has a tough job weaving all of the characters' story arcs together — from Dorne to King's Landing to the Wall and back, there are plots going on everywhere, and I'm sure it's no easy feat for writers to cover all their bases and keep the story flowing. So, I understand that not all characters are going to get all the screentime they deserve. (I mean, personally, I'd be OK if the entire show was just Varys and Tyrion Lannister talking smack about the idiots that surround them in the seven kingdoms — but I suppose that would ruin the narrative.)

I'm biased, of course, as every GoT fan is, about which of their favs should get the most screen time. But, if there are so many scenes of that horrible bastard (literally) Ramsey Bolton, and the likes of him, these six characters can be spared a little more attention than they've been granted until now. After all, they are way better, and we all deserve more of the goodies among all scenes of Westeros baddies:

He's the best whisperer there ever was: Lord Varys, the supreme spy of Westeros with his little birds everywhere, is one of the most intriguing characters in Westeros, because it seems like he's actually... good? In Season 5, the best exchange of all came between Varys and his pal Tyrion, when they were discussing the true extent of just how royally screwed the seven kingdoms were. Varys delivered the game-changing proposition that kings were dead and queens were the answer. Thank the gods, old and new, that Varys introduced Tyrion to Khaleesi. Three IS Company when it's the Half-Man, the Spider, and the Mother of Dragons, and, as a result, I need more Varys in Season 6. He definitely has the answers.

Season 5 saw Brienne trying — and failing — to save Sansa and Arya Stark. Though she waited at Winterfell for Sansa to light the candle for help for much of Season 5, she also got some sweet, sweet vengeance for the death of her former King, Renly Baratheon, by stabbing Stannis in the gut — and that was one of the best scenes of the season. She needs more screen time. In a show that depicts dudes being real misogynistic toward women, Brienne Of Tarth is a female character that defies the odds — even though Brienne is subject to the jeering and mocking of all the dumb dudes who don't believe that a woman can be a knight, she proves herself better than the whole lot of them. She's sharp, she's quick, she's independent, and — though at times she can be stubborn — Brienne is the most noble knight on this whole show.

Also, besides deserving more screen time, Brienne could also play a hugely significant role in the fate of Jon Snow.

Podrick is the cutest. Squire first to Tyrion Lannister and now to Brienne of Tarth — they make the greatest comedic duo on the show — Podrick is awkward, he's a little unsure of himself, but he's just so GOOD. Like, an actual good person. And he's brave, too: though you might not expect it from ol' Pod, he's done his share of killing (though unlike many of the murderers in Westeros, he regrets it). Podrick and Brienne traveling together during Season 5 was one of the best highlights of the show, that provided a little relief from all the terrible goings-on. More Pod! More Pod!

The coolest grandma ever, and the head of her house, even though she is — *gasp* — a woman. How is the whole show not about this woman? Hey, homegirl even killed that pint-sized brat, Joffrey! Margerey's grandmother is ruthless, keeping her friends close and her enemies closer. She is constantly calling out the Queen Mother on her bullshit, and can craft an insult like a pro. Olenna Tyrell proves that you're only as old as you feel, and she obviously is young at heart and ready to wreak havoc on the Lannisters — so obviously, she needs more screen time. Or, her own spinoff.

Luckily, the casting for Game Of Thrones Season 6 reassures that we're gonna get a lot more Tarly time — his whole family will be on the next season, including his handsome younger brother Dickon. And, the fact that he still doesn't know that his BFF Jon Snow was likely killed by mutineers means there will certainly be some sad Sam scenes — but Sam is brilliant and kind and he will prevail. I hope. The last we saw, Sam was riding off with Gilly to the Citadel to become a maester, so I hope he gets his shine on in Season 6.

OK, this goes without saying, but I'd regret it if I didn't express here my love for Bran. And since Bran Stark was off-screen entirely during Season 5, I can't wait to see him back in action in Season 6, rich with all of the magical knowledge bestowed unto him by the Three-Eyed Raven (with Hodor, too, duh!) Bran Stark could be the key to unlocking the past with his greensight, and I personally think he's going to have a major part in the fate of his step-brother, Jon Snow.

I'll see you all in the spring! Until then, I'll be over here obsessing over Jon Snow theories like the rest of the poor saps in the Game Of Thrones fandom.