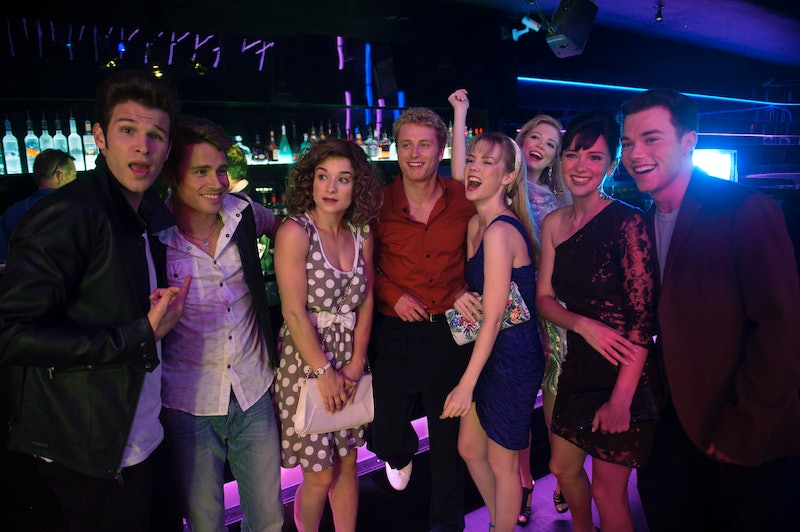 Many fans remember Beverly Hills, 90210, not just for it's drama onscreen, but everything that went on once the cameras stopped rolling. So when Lifetime announced that it would produce a behind the scenes, "unauthorized" look at the making of the series, fans went wild wondering just what juicy tidbits we'd get to see. Of course, a scandalous story is even juicier if it's true, so we have to ask, how accurate is The Unauthorized Beverly Hills, 90210 Story ? After some very scientific experimentation with beakers and lab coats, I have concluded that we should take a look at the other "unauthorized" biopics Lifetime has released recently to surmise whether we should take the drama with a grain of salt, or consider ourselves privy to the real secrets of Beverly Hills, 90210.

Let's be real here, usually the word "Unauthorized" is included in a TV show, book, or movie title for a very specific reason. It often allows events to be dramatized, sometimes past the point of recognition. It's a fine line. However, that doesn't seem to be the case with The Unauthorized Beverly Hills, 90210 story. Fortunately for fans of 90210 and the other classic series Lifetime has revisited, the network took a smart approach by mostly not relying on sensationalism to create entertaining movies.

As the writer of The Unauthorized Full House Story, Ron Mcgee, told USA Today, there was a serious standard to be met when it came to what could be included in the movie. Everything needed a reference point to back it up, and if the source wasn't solid, they didn't include the information. However, it appears The Unauthorized Saved By The Bell Story, released almost a year before the Full House movie, appears to have gone through a different process.

The Unauthorized Saved By The Bell Story proved to be a little contentious with the cast of the original show. Since the book was loosely taken from cast member Dustin Diamond's controversial memoir Behind The Bell, there were some who claimed that his perspective of what happened behind the scenes was vastly skewed and filled with untruths.

For example, Elizabeth Berkley, who played Jessie on the original series, told Extra about the movie, "You know what, I feel like we know the lives we led, and I think that they're taking it off of the unauthorized book by Dustin Diamond… so it's a little silly to give credence to that when we know the innocence and the joy that we shared." In the same interview, Mario Lopez (AC Slater) said he didn't want to watch the biopic. So where on that scale does The Unauthorized Beverly Hills, 90210 Story fall?

Jesy McKinney, who plays Luke Perry in the Lifetime movie, told Today.com that extensive research was done to ensure that the events of the film actually transpired in real life. When asked how much of the movie would be true, he responded by saying, "From the research I've done and received from our research team — we had a 100-page document of different moments from newspapers and biographies and cast interviews — if all those things are true, I would say 90 percent of it really happened." Hey, that works for me!

It seems Lifetime did its due diligence to keep things from going off the "unauthorized" rails, so I'm definitely looking forward to seeing some '90s drama ripped straight from the headlines when The Unauthorized Beverly Hills, 90210 Story premieres on Oct. 3 at 9 p.m.