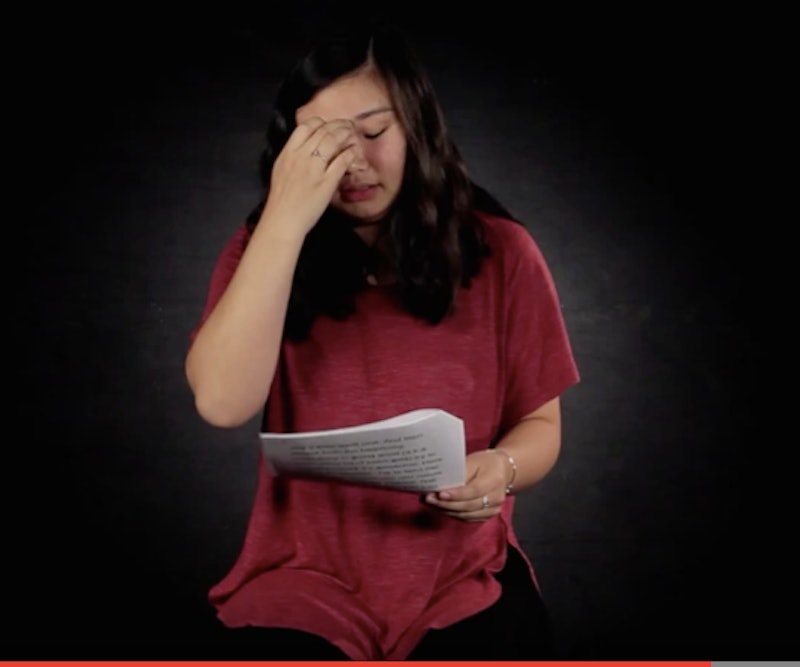 In conjunction with the EROC (End Rape On Campus) organization, BuzzFeed recently released a video which depicts three college women reacting to stories of campus sexual assault. The video puts a spotlight on the college administration's role (or lack thereof) in ending rape on campus. Opening with a startling quote directly pulled from the administration of UNC Chapel Hill, it reveals how the school drew a comparison between a student's sexual assault and a football game, asking what she, as a player, could have done differently. The school's reaction to the student strips her of her status as a victim and unjustly portrays her as a willing participant in an event. The students featured in this video share their candid reactions, appalled by the lack of empathy and distasteful use of a joyous sporting event as an analogy for rape. The lack of sensitivity, responsibility and initiative from the administration is unnerving to these new students. And it's their position as new students that make this video particularly important. They're the thermometers in the water right now, communicating a climate that is hard for outsiders to gauge.

Another example of rape culture on campus features the lyrics to a popular chant from the Yale University fraternity Delta Kappa Epsilon: "no means yes and yes means anal." Yale University is a private Ivy League school that was founded in 1701, making it the third oldest institution in America. Its academic legacy makes it one of the most prestigious schools in the world. Some of the country's most prized individuals have attended Yale. From Eli Whitey and Samuel F.B. Morse to the Clintons, the school has always been held in the highest regard. But now when you Google Yale, you'll find Delta Kappa Epsilon's infamous chant, proving that the trivialization of sexual assault has spread boundlessly, like a an epidemic.

In another jaw-dropping quote read to the video participants, it was suggested to an Amherst University rape victim that she drop out of school until her assailant graduates. The girls had a unanimous reaction: where's the justice? Not to mention, that by allowing an alleged rapist to stay in the school system, it is putting the entire campus in danger. This type of response from another esteemed institution is pure negligence. It's a blazing indicator that the system to protect women on campus is not in place.

The last topic takes a brief look into an email that went around a Georgia Tech fraternity. The email instructs recipients on how to "successfully" bed women. While the email claims to discourage rape, it uses circumlocution to enforce its intentions. In the email, the fraternity uses a motto: "encounter, engage, escalate." In reality, a real anti-rape message would be much simpler: "no means no."

While the women featured in this video did not need to be read quotes and statistics to be aware of rape of campus, it appears to have helped ignite a quest for justice within them. It will take strong, reactive young women like this to inspire change on campus. Watch the whole video here: