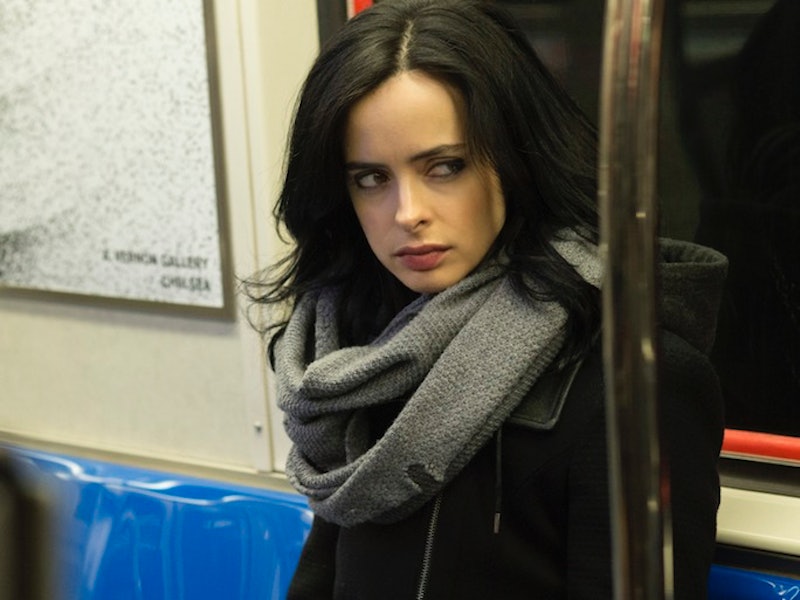 November has never seemed so close and yet so very far away. No, it's not turkey I'm longing for; it's Netflix's Jessica Jones. The latest Jessica Jones teaser takes barroom brawling to a whole new level and has me praying to the Marvel gods to transport me to a Jessica Jones filled future. Each new glimpse I get of the badass superhero turned P.I. tells me a little bit more about who she was and who she is, and the picture taking shape is of a kind of female superhero that has never been on TV — or a streaming service — before.

Just like in the alarm clock smashing teaser, Jessica's face remains unseen in the latest teaser, and there is no dialogue. Actions truly do speak louder than words when Jessica walks through her carnage to turn back a shot though. Who is this woman? And does Netflix really expect me to wait until November 20 to meet her? OK, so they do, but you know what? They can't stop me from speculating about what Jessica's deal is. This hero has a story, and every teaser, photo, and blurb Netflix has released so far points to a story filled with trauma, butt kicking, and possible anger management issues.

It is time to take a closer look at who Jessica Jones really is, and what her journey will be over the course of the series.

Retirement is clearly not stopping Jessica from brawling. She is a person who is not afraid to rumble. While superheroes are expected to get into their fair share of fights, it's not a sign of a healthy civilian life to consistently end your evenings with bloody knuckles. As much as Jessica may insist she's done with the superhero life, everything Netflix has shown so far suggests it is only the costume she has left behind. Don't expect Jessica to be working 100 percent inside the confines of the law if she can find a quicker solution to a case.

2. She Has A Twisted Sense Of Humor

Jessica has to have a dark sense of humor to play "Bad Reputation" after taking down a bar full of troublemakers. The leather jacket/combat boots combo are also a big tip off that Jessica likely hides her anger behind some well-timed snark. Tough on the outside with a whole lot more going on inside is definitely her M.o. as far as I can tell.

Both teasers have featured a whole lot of booze. Since a trauma is what led Jessica to reinvent herself, it follows that she might have fallen into the habit of drinking her problems away. Since Luke Cage is going to be a bartender in Jessica Jones, he could be her reluctant enabler. Having Luke and Jessica's relationship begin on opposite sides of a bar is a fascinatingly screwed up way to kick off the meeting between these heroes. It makes me wonder if Luke is going to try to curb Jessica's more self-destructive instincts, or does she allow him to indulge in self-destructive behavior of his own?

4. She Goes Looking For Trouble

Who gets into a bar fight before 8:00 p.m.? Jessica Jones, that's who. There are some heroes who can't seem to avoid trouble, and others who go looking for it. I'm getting the sense Jessica falls in the second category.

5. She Is Super Strong

Jessica is strong, guys. She is clock-smashing, jukebox rattling, take down an entire bar full of people alone kind of strong. Her strength is impressive and will no doubt lead to some killer visual moments in the show.

Check out the teaser for a closer look at Jessica in all of her brutal glory.

Jessica Jones is going to be an amazingly tough, messy, and mesmerizing show to watch. Let me say it again: can it be November 20 now?