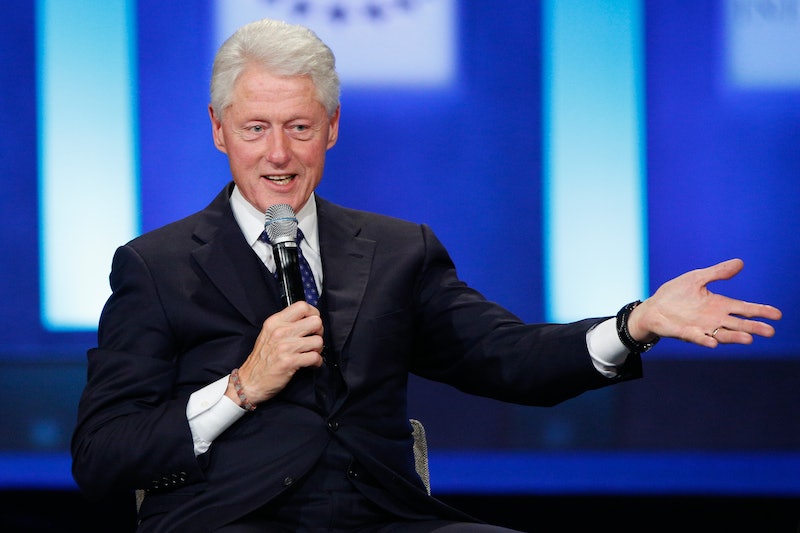 Expectant parents have about a million things to prep before that baby of theirs arrives — and for those who hope to take time off after having said baby... well, that can tack on a host of other issues. As it stands now, the U.S. still doesn't require paid maternity leave policies of its companies — and it's the only developed nation in the world that doesn't. (To say nothing of the fact that paternity leave is almost non-existent.) But, at the annual Clinton Global Initiative meeting on Tuesday, Danone announced plans to improve parental leave programs nationwide with the launch of the Working Parent Support Coalition. The coalition brings together leaders from several major companies throughout the U.S., including Nestlé and Ernst & Young.

"We’re taking another step in the right direction by committing to evaluate and share the impact of our new maternity leave policy on employees in the U.S.," said Paul Bakus, president of corporate affairs at Nestlé, in a statement to Fortune. "Our goal is to use this information to contribute to the ongoing dialogue around maternity leave policies so we all can continue to improve."

For its role in the coalition, Nestlé is conducting a study to analyze the link between parental leave policies and employee retention 12 and 18 months later. Considering businesses spend the equivalent of 21 percent of an employee's salary to replace them, the idea is that study results will demonstrate companies are better off treating new parents well than replacing them a short time later. As Bakus explained, "Right now, I think many companies are just looking at this as a cost, and they don’t have a lot of data to see it from a different vantage point." The initial results should be published by the end of 2016.

Aside from employee retention, though, there are plenty of other indisputable reasons why it's time for maternity (and paternity) leave reform in the United States.

According to the U.S. Department of Labor, only 12 percent of employees in the private sector are offered any paid parental leave, and many mothers must return to work after giving birth as soon as possible to cut back on lost wages. According to a recent study from the Centers for Disease Control and Prevention, one-in-three employed women doesn't take any maternity leave at all, while an additional 16 percent took less than one month off from work.

That has potentially harmful effects on both mom and baby: Women who return to work quickly generally cease breastfeeding sooner, even though breastfeeding is shown to improve bonding, stimulate baby's development, and reduce his or her risk of health problems such as asthma, Type 2 diabetes, and SIDS. Other studies found women who extend their maternity leaves report lower rates of depressive symptoms.

In 1993, Congress passed the Family and Medical Leave Act (FMLA), which enables eligible employees to take 12 weeks of unpaid leave without threat of getting fired. The problem is, the Center for Economic and Policy Research found more than 40 percent of U.S. workers aren't covered by the FMLA for various reasons. There are four states — California, New Jersey, Massachusetts, and Rhode Island — that have taken it upon themselves to mandate some paid maternity leave (yay!); but that's only a fraction of the country, so the majority of us are still on our own. (Boo!)

3. Working Moms Are Permanently Set Back

A University of Massachusetts study found that a woman's earnings decrease for every child she has by four percent. In shocking contrast, wages for men go up by more than six percent when they become fathers. That's one big reason why the wage gap between men and women exist: When both sexes enter the workforce, they are paid pretty comparable salaries. But, as they reach the average ages of marriage and parenthood, working men start to outearn working women. Overall, women only make $0.78 for every dollar their male counterparts are paid, proving we still have a long way to go.

Fostering policies that retain women after they become mothers and don't punish them for taking maternity leave is a major step in the right direction for general workplace equality. Netflix paved the way for this earlier this year, when they announced an unlimited maternity leave policy for their workers. Soon after, Microsoft followed suit with their own enhanced maternity policy. And just this week, the Bill Gates Foundation announced one year of full paid leave for parents, should they wish to take it.

Here's hoping more companies follow suit soon — or better yet, Washington is moved to change things on a federal level, to ensure that paid maternity leave isn't just a perk for some, but a universal right for all.

More like this
How To Fight For Reproductive Rights, Based On How Much Time You Have
By Courtney Young
The Music Industry Continues To Fail Black Women
By Precious Adesina
LGBT+ Men Fleeing Afghanistan Were Denied Asylum By The Home Office, New Findings Show
By Sam Ramsden
Yomi Adegoke On The Offline Diaries & The Power Of Representation
By Jessica Morgan
Get Even More From Bustle — Sign Up For The Newsletter