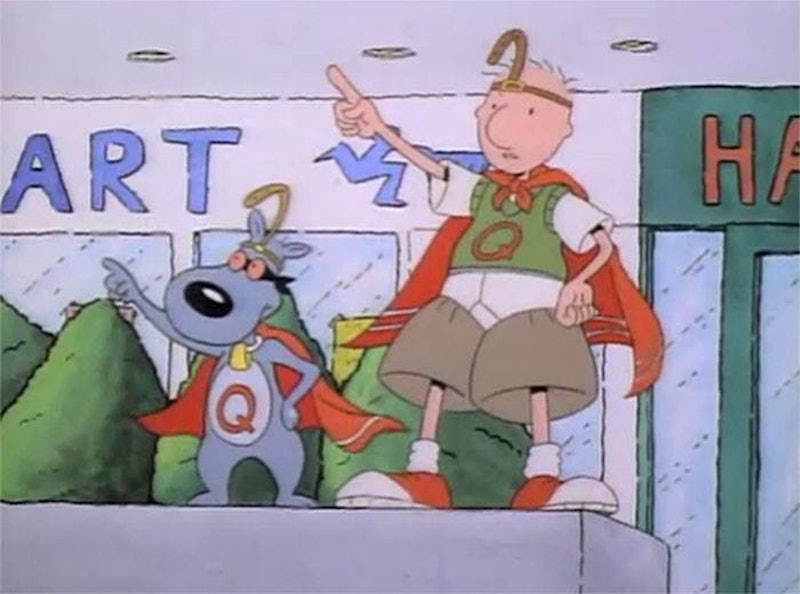 These days, everything old is new again, and the '90s are making a serious comeback on TV. If you haven't heard, Nickelodeon will be airing The Splat , a nostalgic programming block of all of our favorite classic Nick shows from the '90s every day from 10 p.m. to 6 a.m. We know shows like Rugrats and The Wild Thornberrys made the cut, but will Doug be on The Splat ? It most certainly will, and that's a good thing, because Doug Funnie, his dog Porkchop, and the whole Bluffington gang deserve to be seen again. I loved Doug when I was growing up, because it was so much unlike other cartoons. Sure, the series had its wacky moments (ahem, Quailman and Smash Adams) and, of course, was animated, but at the end of the day, the show was very grounded and seemed so real.

Doug ran on Nickelodeon from 1991 to 1994 and then became a Disney show, airing on ABC's Saturday morning lineup from 1996 until 1999 when Doug's 1st Movie was released to cap off the series and the decade. I always liked the fact that Doug seemed to face problems that a regular kid would have and then he would thoughtfully write about them on paper in his journal, which is totally something I did, too, until Xanga and LiveJournal became a thing in the 2000s. Creator Jim Jenkins told the Huffington Post that he wanted to make the series about being honest and clear. "I didn’t want to show all of the ambiguity of the adult world to kids," he said. "I wanted to show kids a world where everyone took honesty seriously."

And Doug definitely accomplishes that. Here are some classic episodes you need to catch again before it hits The Splat in just a few short days.

Confession: I have a big nose that I used to be really self-conscious of, so when I saw this episode as a kid, I totally related. Doug gets anxious about his honker after Skeeter's brother calls him "big nose," but of course he learns to embrace it in the end.

2. "Doug Gets His Ears Lowered"

On the surface, this episode is simply about Doug trying to find a barber who cuts his hair like his former one did and it makes him sound like some kind of spoiled perfectionist. But if you look deeper, there's actually a sweet longing for the past and Doug's search for a single constant in his ever-changing life.

Doug spends a lot of time writing in his journal, so naturally an episode about his journal getting lost would happen at some point, and boy is it stressful! It's because we all know that Doug's journal means the world to him, so when Roger gets his hands on it, this episode makes me just as nervous as Doug.

When it comes to the top '90s bromances, there was Corey and Shawn on Boy Meets World (and now on Girl Meets World) and there was also Doug and best friend Skeeter. The latter friendship shows its importance in this touching episode, when Skeeter thinks he has to move away from Bluffington. The keyword here is thinks.

The second half of this episode also includes Doug's first date with long-time crush Patti Mayonnaise. Too cute!

As grounded as Doug was, this episode about Doug's dog falling in love exists, and it's very cute. Doug starts off noticing Porkchop going through his own moody doggie puberty when he falls in love with a poodle. (And that's as explicit was it gets — it's a kids show!)

Doug gets invited onto a TV show, but it's one from his childhood, Kiddie Korral. He and Skeeter go, but Roger tapes the show and embarrasses them — but then it turns out Roger has an embarrassing secret of his own.

I hated, hated going to the dentist while growing up and it was so comforting to see that Doug didn't like it either. This episode also shows there's actually no reason to be scared of going to get your cavities filled. As for crowns, root canals, and wisdom teeth, I think that's a totally different story.

Two of the thorns in Doug's side, his beatnik sister Judy and bully Roger, might like each other? It's so fun to watch Doug freak out about this two joining forces.

I'm looking forward to rewatching these Doug episodes — and so many more — on The Splat!