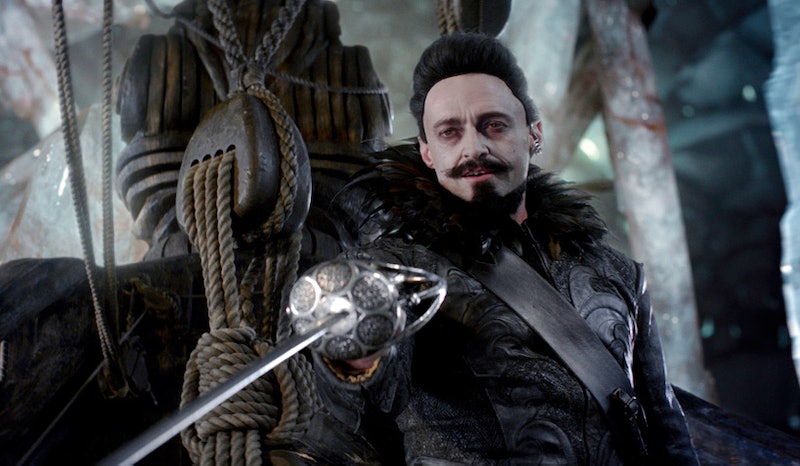 Pan, the newest big screen adaptation of J.M. Barrie's Peter Pan, attempts to put a spin on the famous story. Instead of telling the familiar tale of how Pan, the boy who never grew up, swooped in over London and took Wendy, John and Michael Darling on an adventure, Pan tells the story of how Peter Pan, himself, first arrived in Neverland. As a result of the plot change, many characters and subplots in director Joe Wright's Pan may be new to viewers, the most obvious example being Hugh Jackman's Blackbeard. Blackbeard is an evil pirate who rules over Neverland, who not only acts as the villain in the film, but also appears to inspire a young Peter to join forces with Hook — yep, Captain Hook and Peter are allies in Pan. Given the prequel nature of Pan, it's not surprising that fans are already wondering, will Pan get a sequel? It's certainly possible.

After all, it's no secret that Hollywood studios are all about major franchises right now — Harry Potter, The Hunger Games, even Sicario — and a film that has a plot as dramatic and suspenseful as Pan practically begs for a follow-up. The movie truly does seem like an obvious candidate to receive a sequel — and it most likely will. Garrett Hedlund, who plays a young, pre-hook hand, Captain Hook in Pan , has confirmed that he and other actors signed on for multiple Pan films. While it's unclear whether or not a potential sequel would also feature Jackman as Blackbeard, one can imagine that a sequel would likely see the return of Rooney Mara's Tiger Lily and, unless Pan is meant to already be stuck in time and not aging, Levi Miller as Peter.

"We signed on for multiple. Knock on wood. You start off with the origin, where they come from, and later get into the Hook, the Peter, and the Neverland that we all know and love with other opportunities for surprises and new twists and turns," Hedlund said in an interview with Collider.

In fact, Hedlund admitted that he had many conversations with Wright and screenwriter Jason Fuchs about Hook's origin and his development into Pan's famous enemy. And, yes, some of those conversations led to scenarios in which Hook learned his pirate ways from Blackbeard.

"It's exciting. I don't actually have too much with Hugh. That's something that Hugh and I talk about with Joe as well, the potential for later on. Because there are interesting things in our research that Hook had learned everything he knows from Blackbeard. Obviously that connection will come into it at some point," Hedlund told Collider.

Should a sequel be put into production soon, it's likely the film would focus on Hedlund's Captain Hook, as the actor has the least busy schedule for 2015-2016. Jackman has a pretty busy few years coming up, appearing on Broadway while also filming his last Wolverine film, not to mention playing P.T. Barnum in The Greatest Showman on Earth, expected in 2017. Mara is equally busy, though most of her upcoming projects are listed on IMDB as being in post-production, suggesting she could have time to film a potential Pan sequel sooner rather than later. It must also be noted that, should the Pan filmmakers want to film a sequel with Miller as Peter, the sooner the better, as the young actor will soon no longer be able to play the immortal boy.

That said, if fans are really clamoring for a Pan sequel, you can always watch Disney's animated classic, Peter Pan, or the live-action imagined sequel starring Robin Williams as a grown-up Peter, Hook.