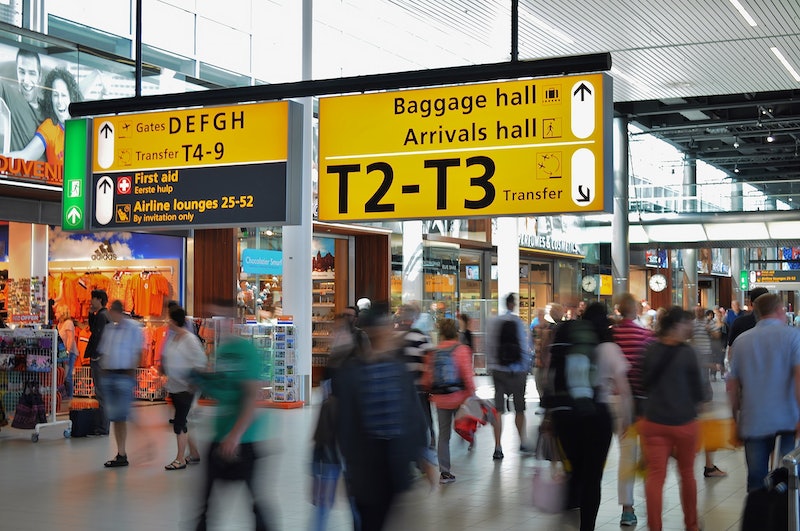 Even though I love to travel, and the thought of getting on a plane to start a new travel adventure really excites me, I kind of hate the reality of flying — and all the stressful travel inconveniences that come along with it. (Seriously, if purgatory is a real place, I'm 99 percent sure it's an exact replica of the baggage claim carousels at Lambert International Airport in St. Louis.) While marinating in this mixture of nervous excitement and anxiety over my upcoming flight/move to NYC, I took to the internet to see if I could discover any new travel hacks to make flying less horrible (and picked my own brain for any useful ones I had forgotten about). Fortunately, I was thrilled to discover that there are a lot of ways to make flying suck less, and they're all surprisingly easy.

Even if you don't love to travel, you will still probably have to catch a flight in the not too distant future for work, family, or just to get your next vacation started — and, as you probably already know, you really can't start preparing soon enough. So, go ahead and start preparing now, using these nine travel hacks to make flying less miserable.

1. Take Your Motion Sickness Medicine Before You Board Your Plane

I'm sure some of you lucky people out there don't experience motion sickness on planes. But for the rest of us, even a two hour plane ride can be utter misery if we forget to pop some motion sickness meds. The last time I forgot to take mine pre-flight, I ended up vomiting three times during a three hour flight because of that mistake.

After that unfortunate experience, I never board a plane without taking motion sickness medicine first, and I take it at least half an hour before my flight is scheduled to take off. Yes, it'll make you a bit drowsy — but at least you won't have to squeeze past your fellow passengers and then run to the lavatory with your hand over your mouth. (Or worse, puke in a paper bag and instantly earn the disgusted concern of everyone in your row.)

No matter how you feel about our smartphone-obsessed generation, it's just not practical to travel without a fully charged phone. What if your phone dies mid-flight and you can't get in touch with your family when you touch down? What if you're traveling for work and you end up missing a really important text, call or email from your boss? What if you get a super sketchy vibe from your cab driver? Or if you're driving yourself, what if you get lost in a new city?

A charged phone provides more than just entertainment — it can help keep you safe. So if you can, invest in a portable battery charger before your next flight. Here's a whole list of them that are relatively affordable and compatible with both Androids and iPhones.

3. Tie A Bright Ribbon Or Bandanna Around Your Luggage

I'm pretty sure everyone hates baggage claim. It feels like a frustrating, never-ending merry-go-round of sameness, no matter where you fly to. And if you're anything like me, the last thing you feel like doing after a long flight is stand in a crowd of strangers and stare at each other's bags. So go ahead and tie a brightly colored ribbon or bandanna around one of your suitcase handles. You'll be able to pick it out on the carousel quickly, sparing yourself from this socially awkward situation while simultaneously saving yourself some time.

4. Work Out Before Your Flight

We all know exercising helps alleviate stress by releasing our endorphins. So if it's at all possible, try hitting the gym before your next flight. If your flight time is crazy early, and you don't have time for a workout, try to squeeze in just ten minutes of yoga. Even a little bit of yoga can help reduce any pre-trip nerves you may have — and since your body will be more relaxed from all the stretching, you'll probably have less soreness to deal with during and after your flight, too.

Jet lag is the worst, but you can hack the hell out of it if you stay hydrated, eat well, and hit up Starbucks before you board. (As if you needed another reason to grab a Venti PSL, right?)

So even though it may mean more trips to those tiny airplane bathrooms (which always seem to have been built for Smurfs), make sure you drink a lot of water before, during and after your flight. And try not to eat too much salty fast food — but do indulge your inner coffee addict.

6. If Turbulence Freaks You Out, Book A Morning Flight

According to pilot Jerry Johnson, speaking to Reader's Digest, turbulence gets more severe as the day goes on because as the ground gets warmer, the air gets more unsettled. Thunderstorms (another source of turbulence) also tend to happen in the afternoon. So if you're afraid of turbulence, book an early flight.

For real though, don't be that person who holds up security because you wore the wrong shoes. You can wear your awesome combat boots another time.

We've already established that dealing with the baggage claim can be pretty horrible sometimes — so if you're going on a relatively short trip, just stuff your carry-on items as full as you can with everything you need for your trip, and then you'll avoid the whole baggage claim mess. You'll save yourself so much time and frustration, I doubt you'll regret your choice to pack on the lighter side. Just be sure to double (and maybe even triple) check your airline's measurement guidelines for carry-on items.

9. Put Your Toiletries In Plastic Bags

OK, so this isn't great for the environment, and you should definitely reuse these suckers as much as possible. That said, storing toiletries in sealed plastic bags will keep spilled liquids or gels from messing up your other belongings — this method has kept me from getting face wash and sunscreen all over my clothes on more than one occasion. So if you're keeping your toiletries in the same bag where you're keeping your clothes, give it a shot. And as a bonus, you have an emergency sealable plastic bag on hand, should you find that you need one during your trip.

Of course, there are some problems with traveling that you just can't fix. But with these hacks, at least you can make the rest as painless as possible.

More like this
Craving The Beach? Here's Your Guide To A Solo Vacation In Turks & Caicos
By Alexis Morillo
You Can Stay At The 'Hocus Pocus' House On Airbnb
By Alexis Morillo
The 5 Best Laptop Power Banks
By Vanessa Spilios
This Psychological Effect Might Be Keeping You From Hitting Your Goals
By Lexi Inks
Get Even More From Bustle — Sign Up For The Newsletter