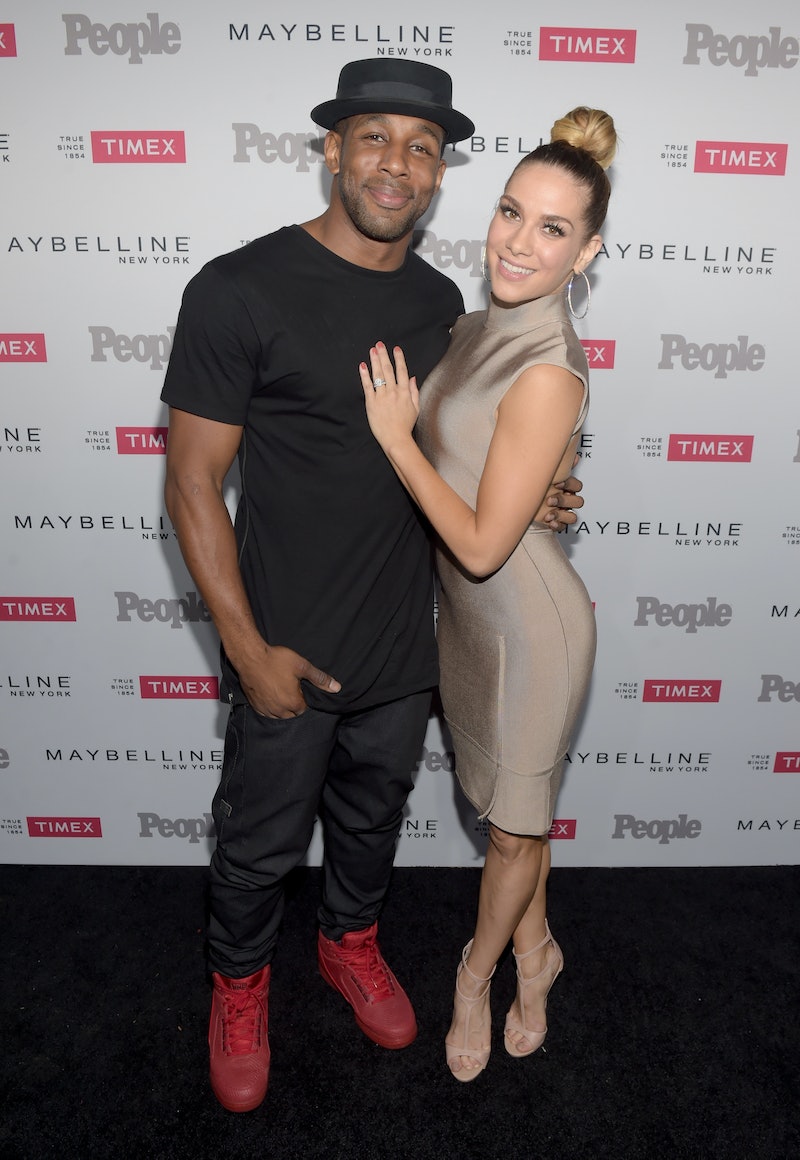 It's only been a few days since Dancing With The Stars pro Allison Holker announced her pregnancy, but she's already well-prepared for prospective mommy-shamers (especially those who shame working mothers). "Having a child is not an obstacle. Having a child is a beautiful thing," she tells Bustle in an interview. "But that doesn't mean that you have to give up who you are." For example, on Monday's live DWTS show, Holker made a big announcement to the ballroom and fans watching at home: She and her husband of two years, So You Think You Can Dance mentor Stephen "tWitch" Boss, are expecting a baby. And, then Holker and her partner Andy Grammer tore up the floor with a cha-cha, because this mom-to-be isn't slowing down.

"I believe that women should keep living their lives the way they've been living their lives. I'm a huge advocate to being a dreamer and believer in yourself as a woman," Holker says. In other words, you won't find her making a choice between her family and her art form. The dancer describes herself as a champion of working mothers; she grew up in a loving home where both of her parents went to work every day, and that experience taught her the power of the example adults set for their kids just by doing what they love.

"That child is going to respect you as a person, seeing all those beautiful things you're doing," Holker says. "You should be exactly who you are. And, that's what children will see everyday, and [they'll] be inspired by you."

Holker already knows a little something about balancing work and family. Her daughter Weslie from a previous relationship is now seven, and Boss and Holker keep her on her toes with frequent family outings. Tennis, movies, golf, etc. — when work and school are done, it's family time; and Holker swears that her job gives her more energy to be present and engaged at home, not less.

"I love the fact that I work all day and I come home, and I have like, an adrenaline rush from my work," Holker says. "I'm so excited about that work I created that I come home and I'm even more excited to share that with my family."

Right now, her growing family is still basking in the joy of the news and anticipating what comes next. Holker tells Bustle that when she found out she was pregnant, she was so visibly happy she didn't even need to say the words for her husband to figure it out. She drove immediately to the So You Think You Can Dance rehearsal studios where he was mentoring contestants from Team Street, and called him out to the parking lot. "I was smiling from ear to ear. Like, my jaw hurt so much from smiling," she says. "And he just looked in my eyes, and was like, 'No way...'"

And, Weslie is just as excited. Holker reveals she is already preparing for big sister duties, and dedicates herself to making mom comfortable. "She's a gem of a child," Holker says. "I'll come home and want to help with dinner, to get the paper towels or whatever, and she'll be like, no no no, mom, you sit down!" In the mile-a-minute, over-scheduled Los Angeles lifestyle, setting up play dates for Weslie can take weeks of planning, so Holker jokes that her daughter is excited just to have "another body" in the house.

As far as the expectant mom's extended TV family is concerned, #BabyBoss just might inspire a DWTS baby boom. "You know, this is the first time this has ever happened on Dancing With The Stars." Holker says about a pro expecting a child while competing on the show. "I feel like my baby has the best uncles and aunts ever!"

Holker is also gleaning inspiration from her partner this season. In his Most Memorable Year dance, singer-songwriter Andy Grammer honored his own mother, who passed away after a battle with breast cancer in 2009. Instead of receding into his grief, he decided to "live every day for her," Holker explains. "Andy created his own backbone. After losing his own mother, he almost became stronger. He found this special light in him that he always had and she always saw." Grammer's experience certainly supports Holker's thesis, which is that being someone's mother is one of the most impactful roles a woman can have.

It's a job that Allison Holker takes seriously, but not too seriously. She and Boss haven't learned the sex of their child yet, but using his last name for the baby does open up some punny ideas for names. "Yo, what if we called him Imma?" she says, laughing.

Whatever they name him or her, with a self-assured, independent mom like Allison Holker, this kid is sure to be getting "boss" lessons on the regular. Congratulations to their family!