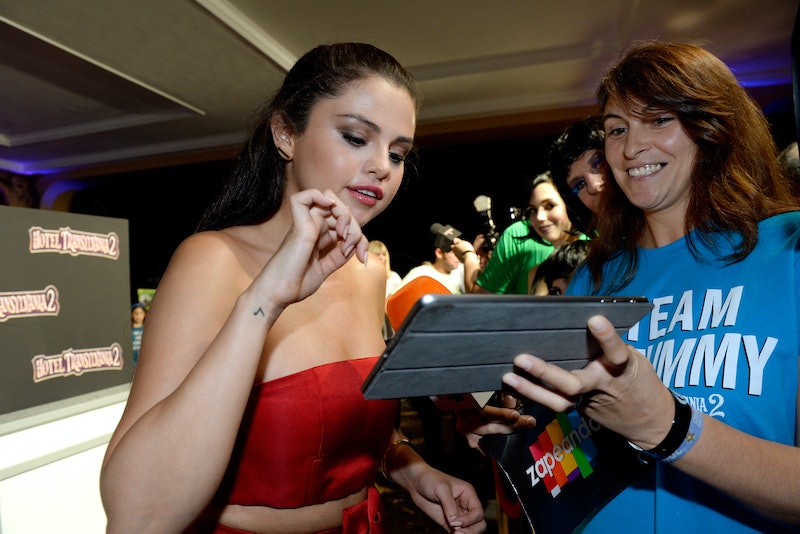 It's Friday morning. Do you know where your copy of Selena Gomez's Revival album is? It's an apt title for an album, because it really does feel like Gomez's musical career, her outlook on life, and even her musical style are going through a complete revival for anyone out there who may have forgotten the pop star is a force to be reckoned with. Gomez's Revival is available on Spotify for streaming, so there is really no excuse for anyone to avoid listening to the amazing songs on the album. But the fans, those who have been screaming and crying about the album on Twitter all morning, have been awarded more than just good music. Gomez wrote a message for fans in Revival's booklet, acknowledging them for their role in her success and for their support over the years.

The booklet in general, naturally, includes plenty of gorgeous pictures of Gomez, perfect for hanging on one's wall, next to the lyrics of every song on the album — as an album booklet is meant to do. And her acknowledgements include far more people than just the fans, but they got an entire paragraph to themselves on the right hand side of the page, and it is too sweet. "My entire career is dedicated to my fans. Hopefully, the person reading this. You," the paragraph opens. "...Thank you for believing in me and helping me fulfill my purpose. You grow with me, and I can't imagine my life being any different." Excuse me while I squeal.

It's hardly the first time that Gomez has gotten emotional on the subject of her fans. The pop star broke down in tears when she won a Young Humanitarian Award for her work as a UNICEF Ambassador, where she gave a speech about how she had given in to negativity and how the support of her fans was like a light at the end of the tunnel. "Until recently, I had given in to that pressure. I lost sight of who I was," she said. "I listened to opinions of people and I tried to change who I am because I thought that others would accept me for it. And I realized I don't know how to be anything but myself." That happened in March of 2014, and it seems that now, in October 2015, Gomez has overcome that moment and many moments like it.

Even better, she has learned enough from those moments to encourage others — especially her fans — to overcome that negativity as well. I'm not saying it's a perfect fix. Everyone has insecurities, everyone has vulnerabilities, and everyone has moments of weakness that cause them to doubt themselves and listen to hate. However, it's so nice, and so powerful, to see someone who is as huge a role model as Gomez not only being so candid about her own struggles, but encouraging others to be candid, to be honest, and to be brave. Her bravery helps her fans be brave, and their support encourages her own supportiveness. It's a self-feeding cycle of positivity.

Revival is one of those albums. If it's not enough to convert you into a fan of Selena Gomez, then it's quite likely that you'll probably never like her music. It's not only that good, but it's a perfect summary of who she is as a performer, what she stands for, and what it is that her fans love so much about her. And, from that dedication in her album booklet, Gomez loves her fans right back.