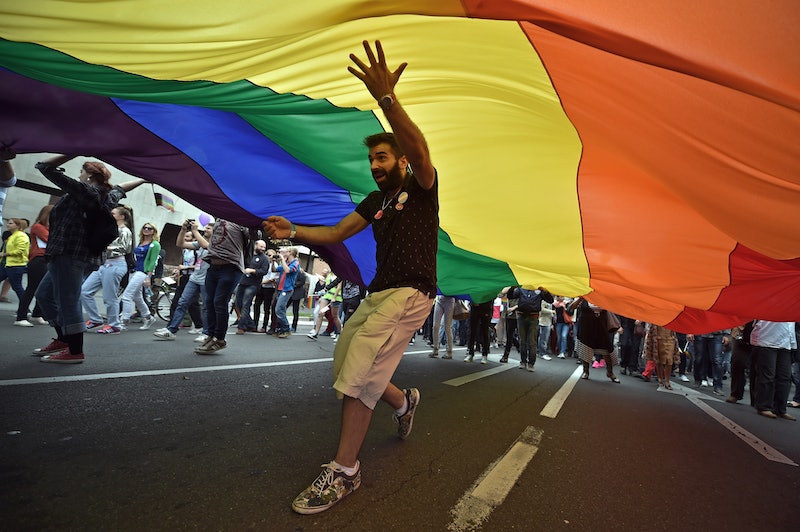 It's time to celebrate National Coming Out Day. Every October 11, on the anniversary of the 1987 March on Washington for Lesbian and Gay Rights, LGBT activists team up to celebrate queer identities and campaign for rights and protections. National Coming Out Day is a Human Resource Campaign holiday that encourages individuals in safe spaces to come out as lesbian, gay, bisexual, and transgender.

Despite the snotty "Oh my God, who cares?!" comments you'll read on web articles about people revealing their LGBT status, every coming out is important. Roughly half of all Americans have a close friend or relative who is gay or lesbian, but only one-tenth of U.S. citizens know a trans* individual. Just knowing a non-heterosexual or non-cisgender person is enough to change how many people feel about LGBT issues, which makes every decision to live openly an impacting one.

National Coming Out Day is also about revealing yourself as a straight ally, which lets your LGBT friends and family members know they can come out to you in confidence. According to The Trevor Project, "[non-heterosexual] youth are 4 times more likely, and questioning youth are 3 times more likely, to attempt suicide as their straight peers." One-fourth of all trans* individuals have attempted suicide. Having someone to talk to can literally mean the difference between life and death, so publicly coming out as an ally could save your loved ones' lives.

For book nerds who want to get in the National Coming Out Day spirit, here are five great LGBT titles you should read today.

Fun Home is the story of author Alison Bechdel's coming to terms with her sexuality and coming out as a teen, true. But it's also an examination of Bechdel's father's life as a closeted gay man, and how conflicts with his sexuality may have contributed to his death.

The Velvet Rage by Alan Downs

In The Velvet Rage, Alan Downs explores the internalized homophobia that plagues gay men who grow up in a heteronormative world, and how self-doubt and -hatred can drive individuals to unhealthy ends.

Joe Bunch is pretty confident in his fabulousness, but that doesn't mean he's ready to come out. When a school bully begins spreading rumors that Joe kissed a closeted jock, life suddenly becomes more complicated.

Deliver Us from Evie by M.E. Kerr

Kid brother Parr narrates the story of Missouri farm girl Evie, a closeted lesbian defying others' expectations for her life. Deliver Us from Evie is a tale of falling in love and coming out among small-town fundamentalists.

Odd Girls and Twilight Lovers: A History of Lesbian Life in Twentieth-Century America by Lillian Faderman

Lillian Faderman's Odd Girls and Twilight Lovers is a comprehensive history of lesbian life and culture in the U.S., exploring what lesbian communities looked like and how they functioned throughout the century and across demographics.

More like this
Gen Z Are Twice As Likely To Identify As Queer, According To New Data
By Sam Ramsden
I Read Prince Harry's 'Spare' So You Don’t Have To: 11 Highlights To Know
By Marina Watts
What The UK Blocking Scotland’s Gender Recognition Bill Means
By Sam Ramsden
8 Charities To Donate To During Black History Month
By Alexis Morillo
Get Even More From Bustle — Sign Up For The Newsletter
From hair trends to relationship advice, our daily newsletter has everything you need to sound like a person who’s on TikTok, even if you aren’t.