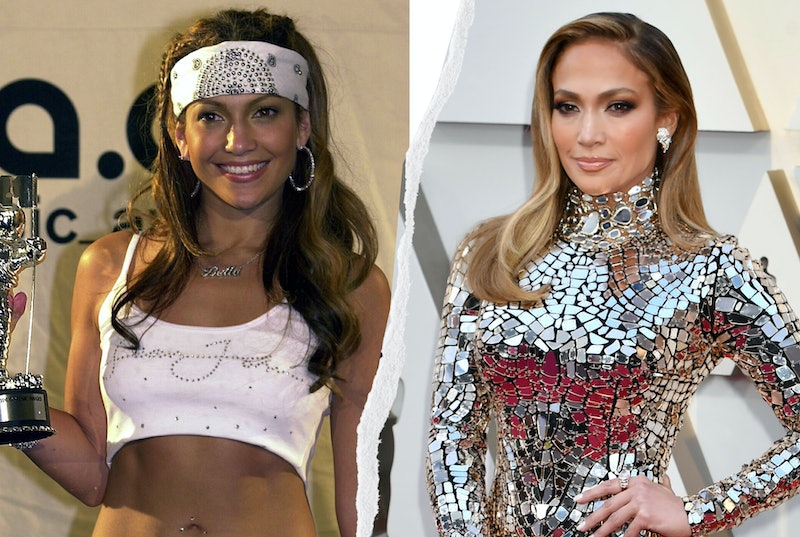 From her career’s early days, when Juicy Couture jumpsuits ran supreme, to her recent habit of stepping out in sleek and chic looks with much-buzzed-about on-again love Ben Affleck, Jennifer Lopez has generated constant headlines about her bold and instantly recognizable fashion choices.

Beyond just being stylish, however, the actor and singer’s outfits reveal just how body positive she always was — and continues to be. Since slipping into her infamous Versace dress at the 2000 Grammys, Lopez has been reminding the world how confident she is about herself and her body, and her resolve only seems to grow with age. Lopez, 52, may raise eyebrows for claiming her biggest beauty secret is just using olive oil, but when it comes to style, every single red carpet appearance is a slam dunk — and a reminder that fashion should be fun and fearless.

J.Lo’s signature style is also often form-fitting, and she’s stuck to a fairly neutral color palette in recent years, although that wasn’t always the case. In 2014, Lopez went through a serious cut-out phase, a trend that has recently reemerged, perhaps in part due to her influence. She’s also a purveyor of the naked dress trend, famously wearing sheer, netted, and flesh-toned gowns that leave little to the imagination. (See: her sparkly Versace dress from the 2019 Met Gala and the totally sheer gown she wore to the CFDA Awards way back in 1998.)

Of course, Lopez’s most enduring fashion moment is that Versace dress from the 2000 Grammys. The sheer printed gown, featuring a thigh-high slit and plunging neckline, was so impactful that it inspired the creation of Google Image search, as thousands of fans the world over took to the internet for a glimpse of the dress. Since that watershed moment, J.Lo surprised fans and sent the web into a fashion frenzy when she wore a version of the look on the Versace runway in September 2019 — and then again that December when she rocked the gown for an appearance on Saturday Night Live.

Given all the head-turning outfits J.Lo’s worn over the years, it’s easy to forget a few of the classics. Here, take a look at 40 of Jennifer Lopez’s most iconic looks.

The dress that launched a thousand Google searches, literally. JLo’s Versace dress has since been reprised on the runway and on television — and it will live in hearts and on mood boards forever.

With metallic and embellished tops picking up speed in the late ‘90s and early 2000s, J.Lo was on trend in a top that essentially looked like jewelry.

She ushered in the metallic top trend of the 2000s with a silver halter that glowed like a disco ball.

A riff on her famous Versace gown, J.Lo chose this red sheer Donna Karan cape — with a one piece underneath — for a red carpet appearance in 2014.

Ever the sparkle lover, JLo chose all over sequins in her go-to silhouette: fitted with a train and plunging neckline.

She also doesn’t shy away from jumpsuits choosing a neutral-toned fitted and plunging number with a slight iridescent sheen for the People Magazine Awards.

In one of their most unforgettable looks, JLo and Diddy matched in all white: her in a blinged-out bandana and crop top from his fashion label Sean John, and him in a standard white shirt and jeans look with a blinding Jesus piece necklace.

Lopez evokes classic old school glamour in this beaded dress and fur stole. Inspired by the 1920s, her show-stopping look could still work for the red carpet today.

J. Lo went vintage for the 2006 Oscars in a ruched dress with a corseted top and pleated skirt cascading around the waist.

J. Lo's mirrored Pucci dress was a hit at the 2011 Grammys, with a short hem and platform peep toe sandals that complemented her mile-long legs.

Lopez could easily wear this ‘90s-inspired beaded slip dress on a red carpet today and totally be on trend. She completed her look with other trends of the decade: strappy sandals and a Hobo-inspired handbag.

The floppy hat and oversize sunglasses look was emblematic of the 2000s, and no one wore these accessories quite like JLo.

From the knit hat to the cargo capri pants to the sequin cardigan, this outfit took every ‘ugly’ 2000s trend and made it look cool.

She was a modern day bombshell at the 2002 Oscars in a Versace corseted trumpet hem dress and big hair that felt decidedly ‘60s.

Her fan-inspired gown channeled the ‘70s disco era with its iridescent sheen and all over sequin embellishment.

Both real and faux exotics make up this memorable monochromatic J. Lo look.

Going bold with sparkle on top and color on the bottom, JLo expertly mixed metallic and bright color for the Film Independent Spirit Awards in 2020.

Looking like an actual ray of light, JLo chose a yellow ruffled gown with exaggerated sleeves and a front slit at the Hustlers premiere.

Simple this Lanvin gown might seem, it was a true party in the back with a bow that demanded a second look whenever J.Lo turned around.

Looking peak ‘90s in a color block dress with an asymmetric side cut-out, Lopez made a lasting impression on the Golden Globes red carpet in 1998.

At the Oscars, J.Lo could be the actual award itself in this sleek mirrored gown with long sleeves and a turtleneck.

With a nod to Old Hollywood glamour, J. Lo chose a sleek black velvet off-the-shoulder gown with a cape-like train for the Screen Actors Guild Awards in 2020.

Still making a bold statement, J. Lo chose a neutral off-white gown that was sleek and understated, designed with a crystal waist and neckline that matched her jewels.

Getting into the “camp” theme of the evening, Lopez opted for a fully beaded flapper-style dress, complete with a matching wig.

Spotted doing press in New York City in 2019, Lopez proved that no one wears a red dress quite like she.

Lopez chose her most voluminous gown yet for the “Second Act” premiere, barely fitting into her car with a giant pink tulle confection.

In celebration of the “heavenly bodies” theme of the exhibit, Lopez chose a feathered and embellished cross gown with a cutout chest line.

A trailblazer of the sheer trend, Lopez wore this iconic sparkly black gown to the fashionable CFDA Awards.

More is more when it came to cutouts on the gown J.Lo wore to the Billboard Latin Music Awards in 2017.

J.Lo somehow upped the cutout ante even further with a second revealing gown at the same event that year.

Lopez wore a long-sleeve sheer gown for an appearance at the 2015 Billboard Awards, a perfect fit for the show’s Las Vegas location.

Lopez turned heads at the 2015 Met Gala wearing a red gown cut in all the right places.

She was easy to spot in this sheer number from the 2013 Met Gala.

Lopez brought her love for see-through to the stage for an epic performance at the 2011 AMAs.

Interestingly enough, between the hat and the feathers, this Met Gala getup may have been one of Lopez’s most covered-up looks yet.

Back in the days of Bennifer 1.0, Lopez wore this tiered, ruffly Vera Wang gown to the premiere of her movie Maid in Manhattan.

For her wedding to Affleck in July 2022, Lopez wore two different dresses: a 1940s-style boatneck sleeveless gown with a pleated skirt (which she actually wore in a movie) and an off-the-shoulder gown from designer Zuhair Murad that featured a fishtail train and corset bodice.

This article was originally published on Jan. 9, 2016