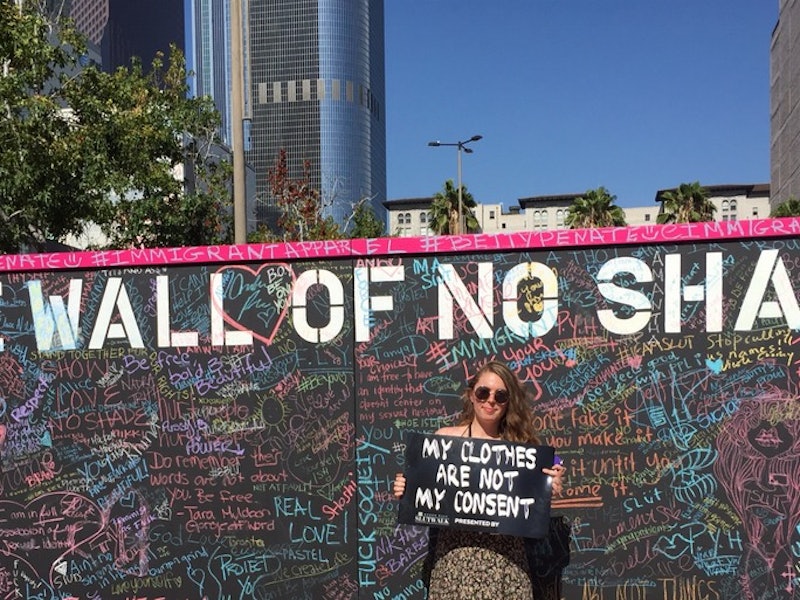 In a culture that fears comprehensive sex education, sex-positivity, sex work, and female sexual pleasure, sexuality can become an extremely powerful, norm-defying weapon in the face of injustice. The #CocksNotGlocks protest — a movement (and fabulous hashtag) involving dildos and sex toys — is the latest action exemplifying sexuality's power to demand political and social change. #CocksNotGlocks is challenging the new Texas state law which will allow the "concealed carry of handguns on college campuses starting in August 2016." Supporters of the law, including Governor Greg Abbott, claim that it will increase students' abilities to protect themselves in the event of a campus shooting, and conveniently ignore the horrific tragedies and potential mass shootings that the law may facilitate. This fear among the student body and staff is very real (for very valid reasons) — an emeritus economics professor has even quit, citing the new law as his reason for vacating the teaching position.

.” What are some other instances of sexuality as a method of protest?

From the viral #FreeTheNipple campaign, challenging double standards and the automatic sexualization of a body part without a person's consent, to sex strikes, to SlutWalks, and more, here are some effective examples of the subversive political power of sexuality:

As Maureen Ahmed wrote in Mic, "Sex strikes are forms of resistance often used to meet political, social or economic goals." They are a form of nonviolent protest in which women (or usually women) practice abstinence and withhold sex from men until specific changes or reforms are enacted. This protest act has existed since ancient times, as demonstrated by the Greek comedy, Lysistrata, in which female characters refuse sexual intercourse with their husbands as a tactic to bring the Peloponnesian War to an end. Sex strikes are still used as a protest strategy in the present day. In fact, in 2002, a sex strike helped bring an end to the 14-year civil war in Liberia. Leymah Gbowee organized Muslim and Christian women to deny sex with their husbands until the violence stopped, and the coalition of amazing women even got the Liberian president to begin peace talks with Ghana, leading to the end of the war in 2003. Gbowee then went on to win a Nobel Peace Prize. In 2011, Filipina women living in Mindanao Island were unable to travel and financially support themselves since the main road was closed due to violence between two warring villages. After the women organized a sex strike, the road was safely reopened in just a few weeks. And these are just two examples of effective sex strikes that have occurred worldwide.

Remember the horrific Hobby Lobby Supreme Court ruling in the summer of 2014, which stated that the religious beliefs of a corporation owner is superior to the health and bodily autonomy of the corporation's female employees, thus effectively denying many women access to birth control coverage? In response, an Illinois United Church of Christ, the Unitarian Universalist Association, and Planned Parenthood staged a protest in front of a nearby Hobby Lobby store where they passed out condoms to shoppers. Rev. Mark Winters from the United Church of Christ explained (as summarized in Jezebel) that the protest was meant "to help people recognize that Christians have a wide spectrum of opinion about birth control; ... to get people to question whether the Supreme Court ruling was fair; ... and to question the (ab)use of power inherent in denying women affordable contraception access."

When Amber Rose hosted her first SlutWalk in Downtown Los Angeles just over a week ago (and it was glorious, by the way), the protest became the number one worldwide trending topic, and SlutWalks have since gotten a lot of media attention. The anti-rape culture, anti-victim blaming, and anti-slut shaming protest actually began in Toronto, Canada in 2011, after a police officer responded to a rape with the disgusting statement that women shouldn't "dress like sluts" if they don't want to be raped. Women organized and began marching the streets, referring to themselves as sluts in order to reclaim the misogynistic slur. You'll often find women at these protests dressed in clothing that is typically considered "slutty" (sometimes they may just be wearing supacute pasties) in order to combat the shame, stigma, and lack of bodily autonomy that patriarchal society ascribes onto women.

In an episode of The Awful Truth, the television show by documentarian Michael Moore (Bowling for Columbine, Fahrenheit 911) that lasted from 1999-2000, Moore and gay rights activists brought attention to unjust sodomy laws with "freedom rides" in a loud, pink RV — the Sodomobile — and stopped for public makeout sessions as they drove through Kansas where sodomy is banned. This episode came out a year after the brutal, devastating murder of Matthew Shepard, whose funeral was protested by the monster Fred Phelps of the Westboro Baptist Church. In the clip, Moore interviews Max Movsovitz, who was prosecuted under the Kansas sodomy law, and the Sodomobile follows Phelps around Kansas to his various hateful protests. The Sodomobile stops each time, and the gay activists get out of the RV each time and engage with Phelps and affectionately kiss in front of him, eventually forcing Phelps' and his crew of other terrible people to shut down their protest each time.