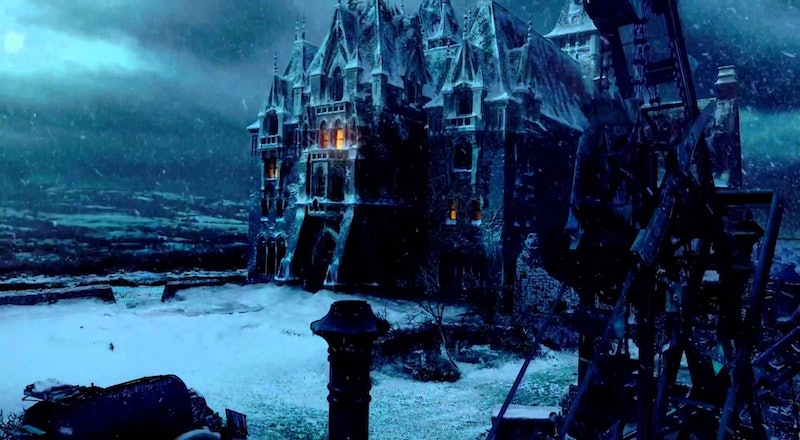 Crimson Peak is the latest film from writer/director Guillermo del Toro, a man known for blending his creepy monster creations with the breathtaking beauty of his sets. And his new movie seems to show off the author at the top of his game in both respects. Master of horror Stephen King said the film was "Gorgeous and just f***ing terrifying," while del Toro himself has referred to it as the most beautiful film he's ever made. And anyone who has even viewed the trailer can clearly see what they're talking about. Crimson Peak , about a haunted mansion in turn-of-the century England, features visuals that are so breathtaking they often end up stealing the spotlight from the movie's notable stars (Jessica Chastain and Tom Hiddleston chief among them), and the most stunning visual of all has to be the house itself, a creepy and opulent mansion. So trust me, you're not alone in wondering where Crimson Peak was filmed.

The movie was not filmed in England, as you would be inclined to believe. Nor was it filmed in Hollywood. Production for the movie actually took place in Ontario, Canada, mostly on a soundstage. But before you go and assume that everything you're looking at are phony sets or computer effects on a green screen, know this: del Toro had an actual, full sized mansion built at Pinewood Toronto Studios to capture his vision. Say what?

Del Toro considers the film to be a gothic romance more than anything else, and in a gothic romance the mansion almost acts as a character itself. So it was important to him that it be real, and not something artificial that was created with computers. The three story mansion, called Allerdale Hall, took a full seven months to build, and del Toro put a crazy amount of detail into its design. He had furniture built in two different sizes to more effectively portray how the characters were feeling at certain times. He color coded rooms to correspond with moods for certain scenes in the film, and the wallpaper of the house has the word "Fear" coded into it. Basically, del Toro put way more thought into this house than most people put into the homes they live in.

And the mansion wasn't just physically real — it could practically be lived in, too. The scary elevator actually worked as a functional elevator. The fireplaces were also real. In fact, the only thing fake about the mansion was the hole in the ceiling. Since the mansion wasn't built outside, they couldn't very well look up and see the sky, so CGI was used to achieve this effect. And in case you couldn't tell already, the mansion is huge. Both del Toro and Hiddleston have said it's the largest set they've ever worked on.

Guillermo del Toro has obviously achieved something monumental (literally) with the house he built for Crimson Peak, and it's hard to argue against its construction once you see it in the film. A flimsy set or a full CGI rendering just wouldn't offer the same atmosphere as a real mansion, and this haunted house film definitely benefits from having an actual house. Now the only question left is: Was it actually haunted?

More like this
Fans Have Discovered The 'I'm A Celebrity' Camp's *Exact* Location
By Emma Madden
David Tennant’s Transformation In ITV’s 'Litvinenko' Is Astonishing
By Sophie McEvoy
How To Stream 'White Noise' On Netflix
By Grace Wehniainen
You Definitely Know The Voice Of Shuri's AI In 'Black Panther: Wakanda Forever'
By Brad Witter
Get Even More From Bustle — Sign Up For The Newsletter