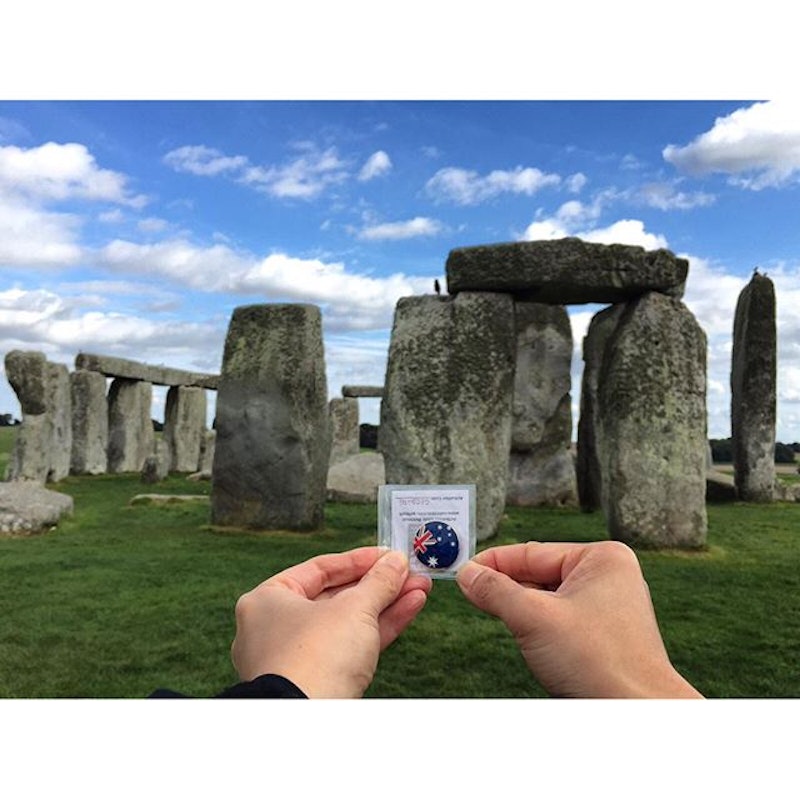 You probably know at least one geocacher, that person with the metal detector and the tiny journal who goes out with a GPS looking for tin cans and other repositories filled with tiny treasures. But what is literary geocaching? Put simply, it's a new fiction trend that encourages readers to go out in search of particular points on a map in order to get the next part of a narrative.

It may be a recent development, but literary geocaching has a long history. The American Lit canon begins with several centuries of discovery and exploration: Columbus, Champlain, Thomas Hariot, and John Smith. The tradition soon spread to fiction, when polar exploration became the backdrop to many Romantic texts, such as Frankenstein and "The Rime of the Ancient Mariner."

In the later half of the 20th century, road books — born out of American car culture — zoomed onto the scene. Beat Generation writers narrated their road trips and drug trips, and peppered their stories with tangible locations to make it easier for followers to pick up the trail. Much the same as the literature of discovery and exploration met fiction in the late-19th century, road books soon collided with the fantastic.

In 2001, Neil Gaiman published American Gods: the story of an ex-con's roadtrip across the U.S. with an unworshipped god looking for a new flock. Gaiman assured readers that his locations were real if they wanted to follow Shadow and Mr. Wednesday. Sure enough, you can now get help mapping your American Gods roadtrip online. Other road fiction has followed, but Gaiman's novel remains the gold standard.

Or did, that is, until literary geocaching came into existence.

I've written previously about Trip Book Smiles , an e-book that changes — substituting Paris' landmarks for Rome's for New York City's — depending on which of the major cities you happen to be in. But it's geolit lite compared to The Silent History : an app-based novel comprised of 120 Testimonials, each of which is only accessible when your iPad or iPhone's GPS matches its location.

Originally serialized between October 2012 and April 2013, The Silent History is now available in print from Farrar, Straus and Giroux. The app currently allows users to write their own, location-specific Field Reports, meaning fans living in areas untouched by the original 120 Testimonials can enrich the Silent History experience by writing about their home environments.

Eli Horowitz, one of the creators of The Silent History, dabbles extensively in location-based storytelling. His upcoming title, The Pickle Index , is two books in one, plus an app. Illustrations in the two hardcovers link up to form images that are more than the sum of their parts, while the app itself is the eponymous index. Readers can opt to experience the story outside-in via the book, or inside-out via the app, but copy on the Pickle Index website assures: "Both editions include the full story and are designed as stand-alone experiences."

Are multimedia book experiences — from geocaching to whatever lies on the horizon — the future of literature? Probably not. Not the near future, at least. But readers are remiss if they dismiss these literary innovations as faddish experiences. In spite of the recent decline in e-book sales, the use of digital devices as vehicles for book consumption isn't about to disappear. If the literary geocaching trend is any indication, screen-reading might just be evolving.

More like this
'Mayfair Witches' Already Changed 2 Major Characters From The Books
By Grace Wehniainen
The 3 Best Heated Steering Wheel Covers
By Margeaux Baulch Klein
I Read Prince Harry's 'Spare' So You Don’t Have To: 11 Highlights To Know
By Marina Watts
Prince Harry Incorrectly Recites Christina Aguilera’s “Genie In A Bottle” Lyrics
By Jake Viswanath
Get Even More From Bustle — Sign Up For The Newsletter
From hair trends to relationship advice, our daily newsletter has everything you need to sound like a person who’s on TikTok, even if you aren’t.