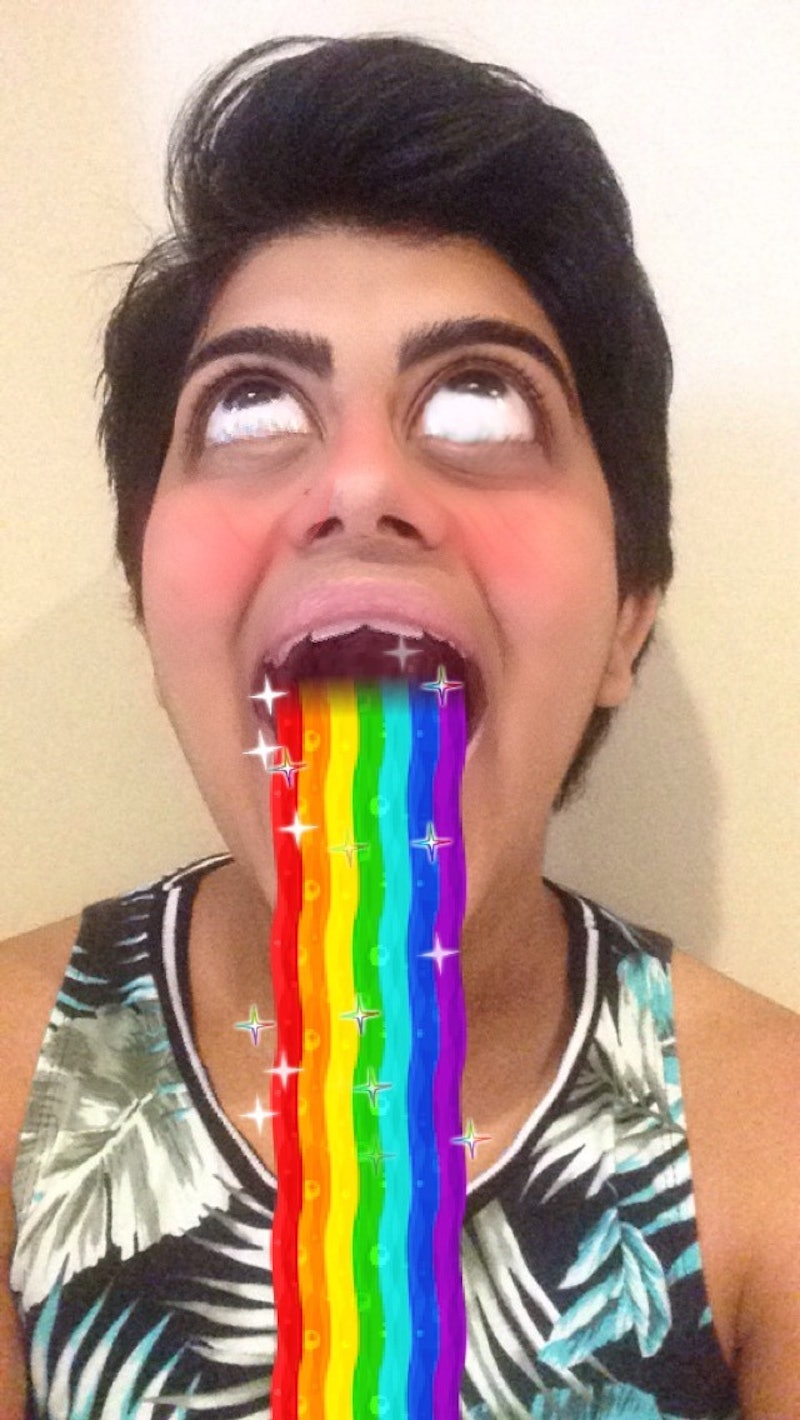 I wasn't much of a Snapchat user until the popular social networking app rolled out "lenses" — live, animated special effects that can be applied to your face when using the front camera. But with the constantly changing array of lenses at our disposal, how are we supposed to keep up it all? That's where this comprehensive guide to all the Snapchat lenses comes in: I've taken the liberty of assembling a master list of every single Snapchat lens that has ever existed, past and present, in order to celebrate the artistry and joy that has been brought to us by the rainbow puke filter and pop-out eyeballs. You can thank me later.

The lens feature was part of a larger Snapchat revamp from earlier this year that also blessed users of the app with trophies and additional replays. These new features turned the app from strictly social media to more of a social-media-game hybrid, a status that other networking tools like Instagram and Twitter have yet to achieve (although whether they want to achieve it is a different question entirely). Plus, since the lenses are being updated constantly with fun, new options, users keep coming back to the app to see all the ways they can transform their faces.

So, without further ado, here is your ultimate list of Snapchat lenses past and present to keep you up to date on social media. I'll be updating it as new lenses roll out, as well, so rest assured that you'll continue to be able to stay on top of the game.

These lenses are all currently accessible in Snapchat, so go give them a shot when you get a chance.

Complete with underwater sounds and bubbles.

For when you want to channel your inner Zeus. Featuring my bottom retainer.

What is happening here? Why is it so creepy? I have no idea, but it's certainly... unique.

In this lens, hearts pulse from your eyes so aggressively that they actually shoot off your face and crack your screen! Or, in my case, crack it even further! The lens is best viewed and used in video mode.

Complete with a banner that reads "cute," reminiscent of the MySpace era.

Because sometimes there are so many tears they come out of both your eyes and your mouth?

Snapchat is definitely pushing the angry lightning lenses — but it's OK, because despite all the electricity pulsing through my veins, my eyebrows are still pretty on fleek.

I'm not even going to try and understand what this is. At first, I thought it was a ton of small fish with blue eyeballs. Then, I saw the C10 and realized it must be a machine. Now, I've settled with "futuristic beard?"

Alas, these lenses have all been retired in favor of their newer, shinier counterparts. But hey, maybe they'll return one day. We can always hope!

This classic Snapchat lens will go down in history as the most-talked-about social media update ever. I mean, just look at it. Look at the joy it's bringing me. If that's not innovation, I don't know what is.

Just in case you wanted to tell someone you're sad and then really emphasize it with Snapchat.

RIP the horror film lens which I hope never comes back. This image of myself still haunts me.

A much less horrifying way to turn your face into an emoji, I think. Featuring Claire Warner.

Be famous! Or, y'know, just look like you are. Featuring Claire Warner.

For those times when you really wish you were Iron Man. Featuring Claire Warner.

So much distress! Featuring Claire Warner.

12. I Mustache You a Question

Are you pretending to be Salvador Dali? Featuring Claire Warner.

I really can't figure this lens out. Is it supposed to look like an emoji? A DIY Halloween project gone seriously awry? Your not-so-friendly neighborhood axe murderer? At least it does a good job of covering up my acne, I suppose.

Remember when you used to blow onto the school bus window and write messages for people outside (or even better, your crush a few seats away)? Well, this is the same idea, except digitized and less wet.

17. An Explosion of Color

This lens is much cooler in video form. It's currently live on Snapchat, so go check it out!