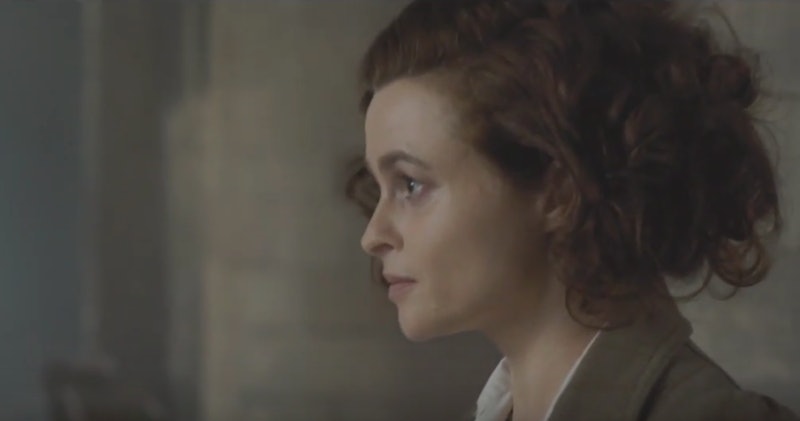 Suffragette is a huge Hollywood victory for women. Not only is the film about the suffragette movement in Britain that lobbied for women's right to vote, it also features an all-star female cast, including Meryl Streep, Carey Mulligan and Helena Bonham Carter, and the film was written and directed by women — Abi Morgan and Sarah Gavron, respectively. The movie, which comes out on Oct. 23, is unique: a film about women, made by women. It would be easy to say that Suffragette aims at teaching a new generation about the history of feminism, but, contrary to popular belief, not all characters in Suffragette are based on real people. Yes, Streep plays real life suffragette Emmeline Pankhurst in the film, but Mulligan's Maud Watts, the main protagonist of the film, is more of an amalgamation of many women who fought for their rights, as opposed to one particular person. As for if Helena Bonham's Carter, Edith, in Suffragette based on a real person? Well, the answer, it turns out, isn't so simple.

In Suffragette , Bonham Carter plays Edith Ellyn, one of the female activists Maud Watts meets as she becomes more involved in the suffragette movement. In an interview with Glamour, Bonham Carter described her character as "the head of the terrorist cell."

"[Edith Ellyn is] pretty militant, and she's there to show Maud that she doesn't have to be bullied. There's an alternative route. The rational part of me is like, 'You don't have to resort to violence. Let's try and sort out the argument.' But their argument was: No one was listening," Bonham Carter said.

The character of Edith Ellyn was created for the film, but she was inspired by many women in the suffragette movement. In particular, Edith Garrud, known for training suffragettes in jiu jitsu, acted as inspiration for the woman. Bonham Carter modeled her performance after Garrud, and even lobbied the filmmakers to change her character's name, originally called Caroline. The actress told Interview,

"Originally the character I was asked [to play] was somebody called Caroline, and then I found out about this character Edith [Margaret] Garrud, who was 4'11" and taught the suffragettes jiu-jitsu — basically self-defense — against the police. I based a lot of this character on Edith, but having said that, for story reasons, a lot of the jiu-jitsu has been cut. ...She's a real inspiration and I thought an amazing story; this woman who is literally 5'1" or even 4'11" and could defend herself against these men twice her weight and twice her size. One of the big arguments against women getting the vote, which was such a stupid one, was that they couldn't fight for their country. They can fight."

To honor Garrud, a woman more often than not forgotten from history, Bonham Carter had filmmakers change her character name to Edith. So, Helena Bonham Carter's character in Suffragette may not be based on a real person, but the woman who inspired her is, and she's definitely worth learning about.