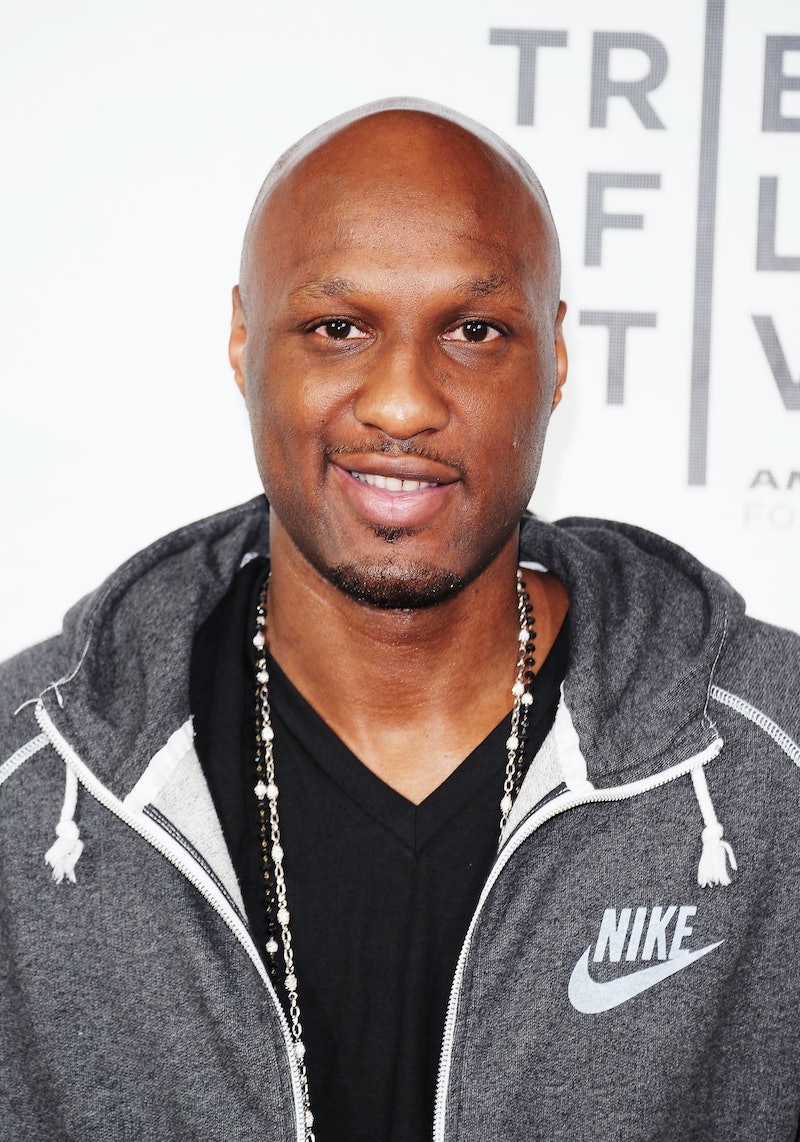 Ever since two-time NBA champion Lamar Odom was found unconscious at Dennis Hof's Love Ranch South, a brothel, in Pahrump, Nevada, on Tuesday and went to a Las Vegas hospital soon after, many have been wondering about his condition and whether there's been any improvement. To keep you current, here are a few updates about Lamar Odom's health as of Thursday, Oct. 15.

(Update: On Friday, Odom’s aunt, JaNean Mercer released a statement to Us Weekly via her rep, Alvina Alson, claiming that Odom "gave a thumbs-up to the doctors this morning and said a few words to them” and that the family is "continuously praying and trusting in the doctors’ care.” According to Us Weekly, Alson also explained that she would not be answering any further questions about Odom’s health.)

On Wednesday, a source who spoke with E! News claimed that Odom "overdosed" on drugs, suffered an ischemic stroke, and could "likely" have brain damage.

Also on Wednesday, Odom's rep Eve Sarkisyan told Us Weekly, "Family and friends are extremely concerned for Lamar. Please don't listen to the false information being circulated unofficially. Please respect the family's privacy during this difficult time." A rep for Odom has not yet released another update. Bustle has reached out to Sarkisyan's office for further comment on the claims below that have been made about Odom's condition, but has not yet heard back.

Throughout the scary situation, the Kardashian family has been supporting Odom during this difficult time, including his ex Khloé Kardashian, as well as his fellow NBA players. Many family members have showcased support for the NBA player via social media, like Rob Kardashian who posted on Instagram, "Praying nonstop for my Brother!!" With that said, here's what's being reported about Odom's status as of Thursday afternoon.

According to The Hollywood Reporter, Rev. Jesse Jackson visited the hospital where Odom is staying, although it is unclear whether he spoke to a doctor or was in the room with Odom. Leaving the hospital, Jackson claimed to reporters, "Apparently from what the doctor said, he was much better off today [Wednesday] than yesterday. He at least has some responsiveness now. He's got tubes in him now, but we felt inspired by his presence." Jackson also claimed that Odom is on life support and appears to be improving.

More Details About The 911 Call

Based on the 911 call placed by Dennis Hof's spokesperson Richard Hunter, which was released Wednesday by the Nye County, Nevada Sheriff's Office, Odom was breathing but in a "deep sleep" when he was found, and there was fluid coming from his nose and mouth. In the call, Hunter claimed Odom took as many as 10 sexual-performance supplement pills, in addition to cocaine. Per Sheriff Sharon Wehryl during a Wednesday press conference, "They [two employees from Love Ranch who phoned 911] confirmed his [cocaine] usage on Saturday but were unsure if it had continued throughout the weekend. They also informed dispatch that he had used up to 10 tabs of sexual performance supplements."

Suicide Has Not Been Ruled Out

As USA Today reports, Detective Michael Eisenloffel "has not ruled out that Odom’s actions were a suicide attempt."

It is "distinctly possible," per Wheryly, that Odom could face charges of drug possession if the drug claims are true, but that depends on the investigation's results. The Love Ranch employees will also be investigated.

His Family Is By His Side

CNN reports that Odom's family is at the hospital, including his father and his two children.

He's "Not Out Of The Woods"

In a tweet posted on Thursday, ESPN's Ramona Shelburne claims Odom is "'not out of the woods' yet, but sources indicate he's made some small improvements today. He remains intubated tho." L.A. Daily News reporter Mark Medina also shared, "I'm told Lamar Odom is still fighting the good fight. Again, long ways to go. But progress has to start somewhere."

Further updates will be reported, so be sure to check back to stay up to date.

More like this
Where Is Oscar Torres In 'Only Murders In The Building' Season 2?
By El Hunt
Olivia Rodrigo’s Song Dedication To 5 SCOTUS Justices Sent A Strong Message
By Grace Wehniainen
The “Beatrice Six” Were Awarded $28 Million After Their Wrongful Convictions
By Brad Witter
It Took Investigators 23 Years To Correctly Identify Helen Wilson's Real Killer
By Brad Witter
Get Even More From Bustle — Sign Up For The Newsletter