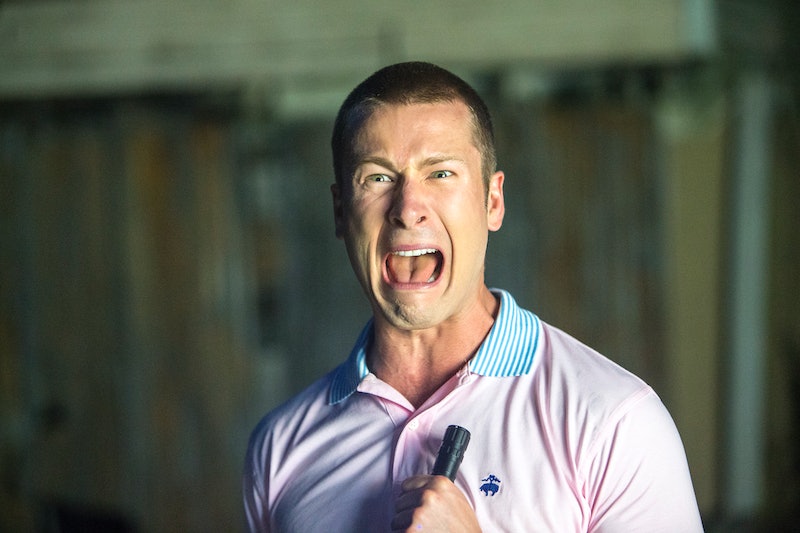 Chanel, you should probably cover your ears because you won't like what I have to say — but it's the straight-up truth. I know you're royalty over at Kappa Kappa Tau (for now), but when it comes to Scream Queens, Chad Radwell is the true star. I'm not sure how Glen Powell manages to deliver his lines with a straight face (someone give him an Emmy STAT), but my biggest complaint about the show is that Chad isn't given more screen time. I mean, think about it — every scene he's in is amazing.

For example, in the Oct. 13 episode "Pumpkin Patch," Chad demanded order in the court before giving an impassioned speech about why cancelling Halloween is the worst idea ever. Sure, he probably should have paid more attention in the American Presidents course he took last semester — but his sentiment about not fearing serial killers was inspiring (although, Caulfield did get his arms sawed off last time Chad applied that logic).

Dean Munsch's somewhat rude response was, "I have no idea how you got into this college." Well, me neither — but I'm sure glad he did, because Wallace University and Scream Queens would be totally incomplete without Chad Radwell. Here's why he's the show's MVP:

1. He Uses History To Support His Points

OK, some of Chad's facts were, uh, a little inaccurate. John Fitzpatrick Kennedy Jr. wasn't our 60th president... and that wasn't his name... and we're decades away from reaching our sixtieth president. And, not to nitpick, but FDR is the prez who famously said, "the only thing we have to fear is fear itself." But, all that aside, we should apply the same logic to serial murderers and not be afraid — and we should certainly not let them interfere with Halloween, the greatest night of the year.

2. He's Not Afraid To Talk About His Feelings

It's really hard to find a guy who's open about his emotions and feelings, am I right? Well, Chad isn't afraid to express himself. And, news flash: he was super sad about Boone's "death." Losing a best friend who compliments you all the time has gotta be rough.

3. Chad Was The Brains Behind This Brilliant Scene

Yes, I just used the words "Chad" and "brains" in the same sentence. Admittedly, his scheme to fight the Red Devil was poorly planned and it predictably backfired in a major way. Take note, everyone — it's unwise to show up to a chainsaw fight armed with nothing but baseball bats. But, A for effort? And, it gave us a Backstreet Boys inspired fight scene, so Chad gets major points in my book.

4. His Outfits Are On Point

The Chanels aren't the only people on Scream Queens who have impeccable style. I've never seen a guy who can rock pastel polo shirts, chinos, and dapper hats quite as well as Chad Radwell.

5. He Has Respectable Hobbies

When there's a serial killer terrorizing your campus, you need to have some healthy ways to unwind. Luckily, Chad's got that covered — and he won't let Chanel interfere with his time hitting golf balls at hippies.

6. He & Hester Are A Match Made In Heaven

If 'shipping Chad and Hester is wrong (which I'm 99 percent sure it is), I don't want to be right. What better way to start off a romance than by bonding over a creepy obsession with corpses? Sorry again, Chanel — but I'm totally rooting for this strange pairing.

I really hope the Red Devil stays far away from Chad this season, because Scream Queens needs him around.

More like this
What’s New On Netflix: A Victoria Justice Rom-Com & The Return Of David Letterman
By Arya Roshanian
What’s New On Netflix: The Return Of 'Bling Empire' & A Rebel Wilson Comedy
By Arya Roshanian
Kanye Walked Out Of Kim's 'SNL' Monologue Because Of These 2 Words
By Jake Viswanath
Watch 'Drag Race' Queens Get New Drag Names In This Exclusive 'iCarly' Video
By Jake Viswanath
Get Even More From Bustle — Sign Up For The Newsletter