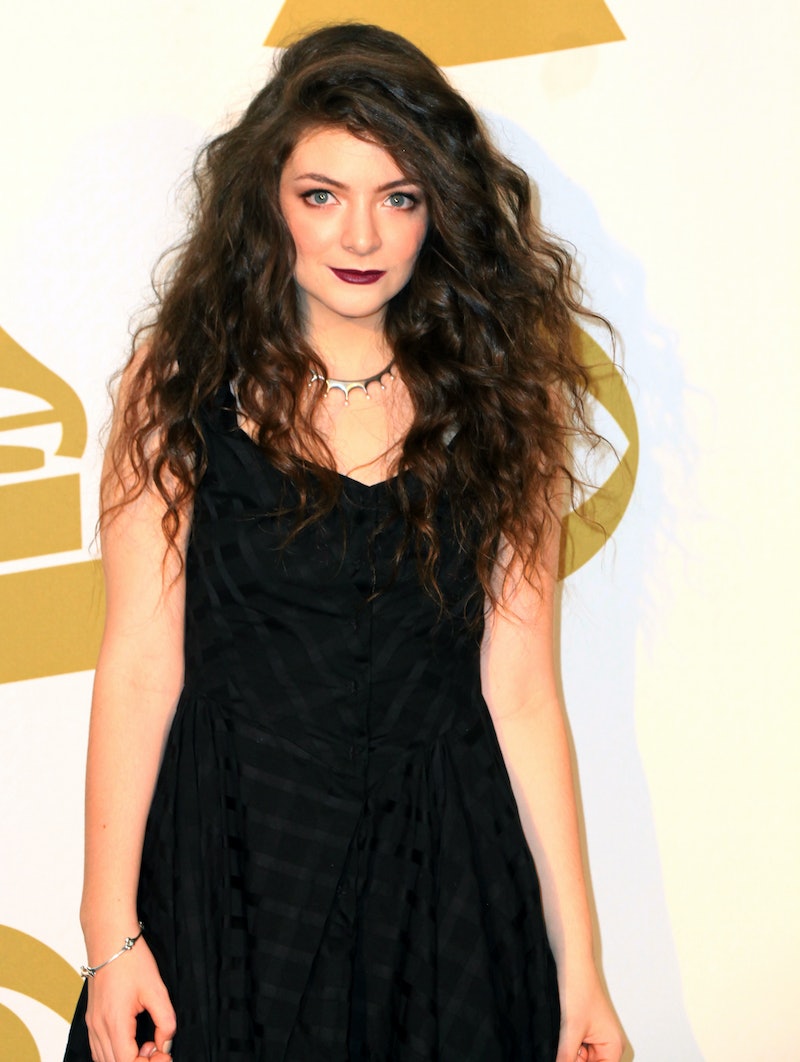 There are many things to love about the enormous, amazing interview of Lorde by Tavi Gevinson in Thursday's edition of Rookie magazine, but one of our favorite aspects of the piece is the reveal that the 17-year-old singer is just like us — meaning she's a huge, unabashed fangirl. Throughout the 10,000 word interview, Lorde spends paragraphs describing her pop culture obsessions, ranging from the movies she loves (The Virgin Suicides, Take Shelter) to the authors she reads (Kurt Vonnegut, Tobias Wolff) to the celebrities she adores. It's the last category that stuck out to us the most, because as we all know, famous people who freak out over other famous people is kind of the best thing ever.

Lorde's 6 best fangirl moments from the Rookie interview, below:

"I liked what you guys said about her not being afraid to let her feminism evolve, and you can hear that in this record, which I think is so important and such a hard thing to bare. It feels really personal. It meant a lot to me—I was just like, Shit, I’m so happy that this exists right now and also I’m so glad that no year-end lists matter anymore. [Laughs]"

Besides the general awesomeness of hearing Lorde obsess over the subject of all of our obsessions, it's great to hear her point out one of things that makes Beyonce such a hot topic — her feminism. Beyonce's been the subject of many "is she feminist?" debates, and it's interesting to hear Lorde, another singer whose feminism is often discussed by the media, give her take on the matter.

Um, yes. Sure, Duvall's not the person we most expected Lorde to fangirl over, but her reasons are spot on. Watch that clip and see for yourself.

You may never know what it's like to have the subject of your obsession reveal his/her obsession with you, but apparently, Lorde does. Whatever.

"Meeting David Bowie... to have someone like that tell you that listening to you felt like listening to tomorrow... I was like… I could creatively die and just be happy forever... It was super cute, though—for some reason we were holding hands and just staring into each other’s eyes and talking, and I was like, This is David Bowie’s hand, what am I doing? It was insane. A beautiful moment."

When Lorde revealed this in the interview, Gevinson's reaction was, understandably, "OH MY GOD." Because clearly, this is the coolest thing ever, and Lorde and David Bowie now share a connection we can only dream of ever having.

"Just as a performer, I often find myself telling people, 'Can we just make this a little bit more like a Kanye performance?' [Laughs] I was on Jools Holland the same week as him, and he did this performance of "Bound 2" with Charlie Wilson. I saw three minutes of it, and to this day it was the best musical performance I’ve ever seen."

Lorde has spoken before about her admiration of West, and, as she goes on to say later in the interview, she's aware that her feelings about the superstar are not shared by many of her peers. Hearing Lorde speak so highly of West, despite the flack it will likely bring her, just proves how confident she is in her own taste, a quality we wholeheartedly admire.

"She is so good as a performer. I don’t think people realize how difficult a stadium is to perform in. You have to change how you move and how you talk to accommodate that scale, and she is SO good at that. It feels natural when she does it. I’m so in awe of her ability, it’s insane."

As musicians, Lorde and Swift couldn't be more different, but that doesn't seem to stop the former from fangirling over the latter's command of a stage. And seeing as the two singers are apparently best friends, it's understandable that Lorde would want to share her love for Swift with anyone who'd listen.

In a world where we're all supposed to be "keeping it cool" 24/7, it's nice to know that even famous people have their moments of fangirling. It's especially good to see Lorde, who's most often found dealing with serious topics like feminism and racism, get the chance to freak out a little bit, if only for an interview. We're pretty impressed with her obsessions, too; Beyonce was an obvious choice, but Shelley Duvall, she of Casper Meets Wendy fame (yeah, yeah, The Shining)? Not what we'd expect — and that's exactly why Lorde is the coolest 17-year-old on the planet.

More like this
Beyoncé’s Special Tribute To Sister Solange Was Both Touching & Hilarious
By Stephanie Topacio Long
Everything To Know About Taylor Swift’s 10th Studio Album, 'Midnights'
By Grace Wehniainen and Jake Viswanath
Christian Bale Sang With Taylor Swift & His Daughter Can't Believe It
By Radhika Menon
Did 'Grey’s Anatomy' Just Drop A Major Taylor Swift Easter Egg?
By Grace Wehniainen
Get Even More From Bustle — Sign Up For The Newsletter