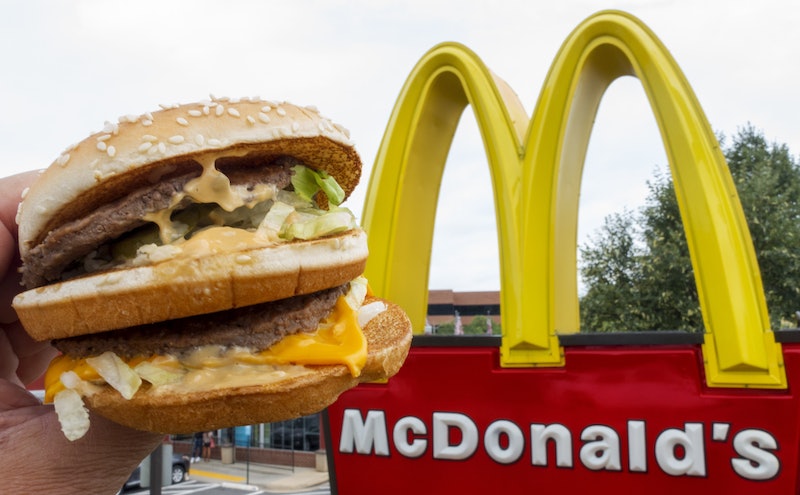 In case you thought Fifty Shades of Grey referred only to a steamy set of romance novels and not a fast food menu item, allow me to introduce you to the latest strange creation to come from the golden double arches: there is a McDonald's gray bun burger available in China for a limited time only, and you kind of have to see it to believe it.

Called the "Modern China Burger," the sandwich consists of a pork patty and bacon with a smattering of Thousand Island dressing — which honestly, doesn't sound half bad. Sandwiched between a regular bun, this burger would be a solid 2.5 on a crazy scale of 1 to 10. But these aren't your average buns. Nope, not even close. Made with black sesame, these babies are gray, y'all. Silver, even. According to some reviews, they appear almost metallic, in case you're into that sort of thing. No matter how you choose to describe the bun's unique hue, though, one thing is for sure: This is definitely not your standard burger.

Its odd gray color aside, the sandwich itself is apparently quite delicious. General consensus at Time Out Beijing was that despite its colorless buns, the burger is "surprisingly palatable," which, all things considered, is pretty much all that counts no matter what you order off a restaurant's menu...even if it is gray.

But enough with the chitchat. I know you want to see what this thing looks like:

The burger is only available in select China locations for a limited time only, but for those of you dying to get your hands on a burger that doesn't look like it would make a lot of sense, take heart: Earlier this month, Burger King brought a version of its popular black "kuro" burger to the States just in time for Halloween. Made with black squid ink, the burger has already experienced success in Japan, and continues to be a point of fascination in America. At the very least, it makes for a great Halloween costume. Get one of your friends to dress up as the gray burger, and together you've just won Halloween.