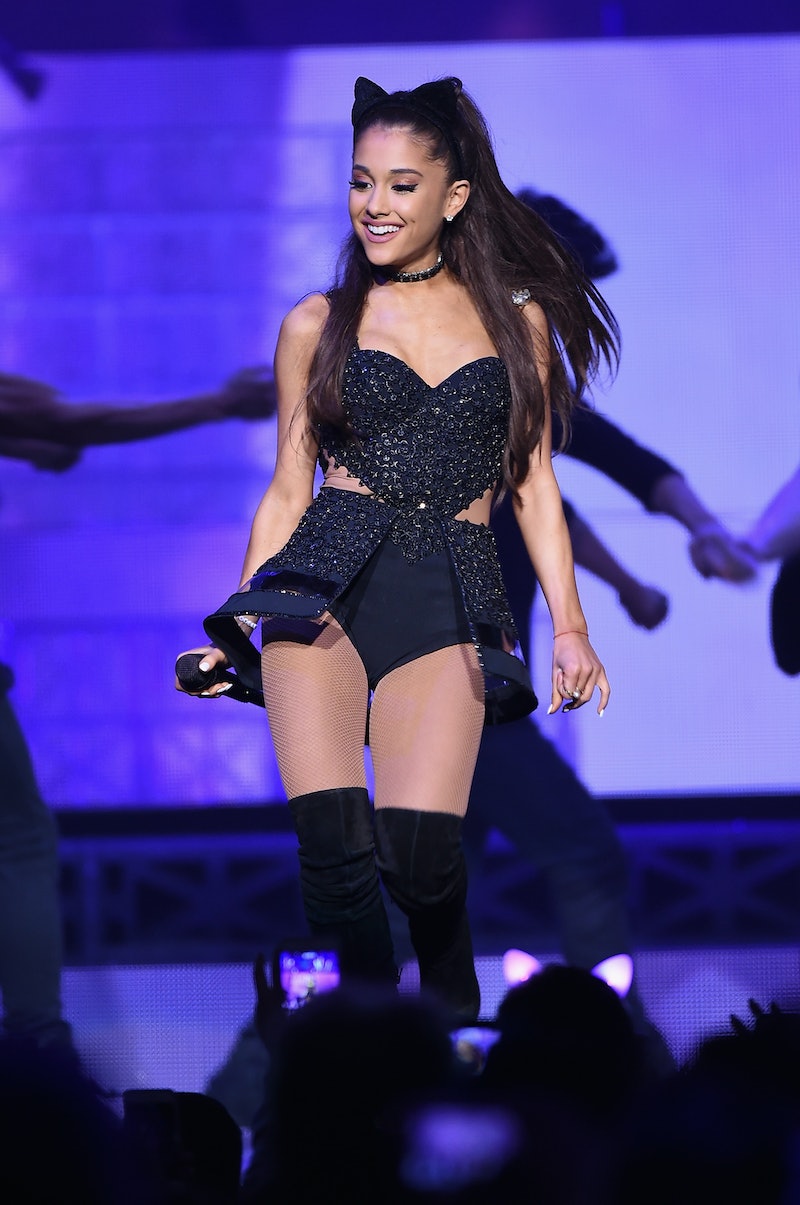 Guess what? Ariana Grande is on a feminist roll this weekend, and it's amazing to see. With that whole doughnut-licking incident behind her (thank goodness!), she's turning her reputation around and proving to be an awesome role model. On Saturday, Grande vocalized support for Demi Lovato and Selena Gomez, fellow female superstars. Continuing this trend of women's empowerment, Ariana Grande spoke out about magazine double standards in a series of tweets on Sunday.

It all began when Grande's mom, Joan, shared two pictures of newsstands. On one side, it said "Men's Interests," along with magazines like Forbes and Robb Report. Meanwhile, the section labeled "Women's Interests" was mostly filled with tabloids. Pretty stereotypical, huh? Joan Grande posed the question, "What's wrong with this picture?" Proving her mama raised her right, Ariana jumped in with the following tweet:

oh! so women are only interested in tabloids& if I want to read about cars, business, science I have to go to the MEN'S section?

But she wasn't done yet! The "Love Me Harder" singer then said, "and I know mannnnnnnny men who are going to the magazine section for a Cosmo or Vogue or an Elle!" She's right — who's to say that women don't care about politics, business, or cars? Maybe men want to flip through Vogue and InTouch, too. Recently Target announced it'd remove gender-based labels on toys, while Disney took "boys" and "girls" labels off of their Halloween costumes. So it's about time that magazines jumped on the bandwagon and removed outdated labels as well.

All in all, this mother-daughter duo raises an important point. It's especially great to see, considering the enormity of Ariana Grande's fan base. She's amassed more than 33 million Twitter followers, and I'd bet a majority are impressionable young people. That's why I'm a big fan of Grande using her huge platform to promote empowering messages.

Here are highlights from the Grande ladies' Twitter exchange:

This isn't the first time Ariana Grande took on the patriarchy, though. Here are five more examples that prove she's all about gender equality.

Back in June, Grande reminded us she is not any man's possession and would not like to be referred to as such.

Grande used Instagram to tell the world she supports Planned Parenthood. It's also worth noting her mom's Twitter photo has the #StandWithPP filter on it. Great minds think alike!

Promoting Sisterhood At Her Shows

Because Grande shares messages about raising other women up, her fans make these kinds of signs at her concerts. How cool is that?

On International Women's Day, Grande took a moment to praise women who support one another. Definitely a worthwhile message.

For all of the above reasons, Ariana Grande is a feminist boss. Here's hoping she keeps up the inspiring work!