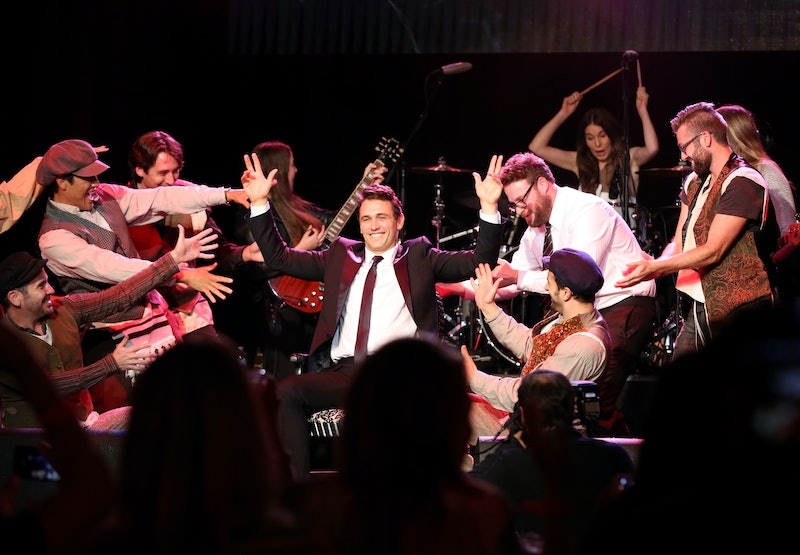 A huge congrats is in order for James Franco. Over the weekend, he officially became a man. No, seriously! I'm not even kidding. On Saturday night, James Franco had a bar mitzvah to commemorate the occasion, and it was a star-studded event. Granted, the 37-year-old is approximately 24 years behind, since the tradition usually takes place when Jewish boys turn 13. But better late than never, right? The bar mitzvah was thrown by Franco's BFF Seth Rogen, because that's the kind of thing best friends do.

This Hollywood party was about much more than just marking Franco's transition into adulthood, however. Teaming up with Hilarity for Charity — an organization started by Rogen and his wife, Lauren Miller Rogen — the bar mitzvah raised money for Alzheimer's research. The party raked in over $2.5 million for the worthwhile cause, doubling their total funds thus far; that in itself is worth celebrating!

So why a Bar Mitzvah now? Back in July, Seth Rogen explained the party's significance to People, saying,

Ever since I've known James, he's been talking about wanting a bar mitzvah. We're excited to see him finally become a man while also helping us raise awareness and funds for people living with Alzheimer's and towards research that will lead to a cure. And in celebration we'll also have a mohel and a live bris for James at the event. You don't want to miss it.

Based on all of the photos afterward, it's safe to say the event was as hilarious and awesome as you'd expect. Here's a roundup of the most outrageous moments from James Franco's bar mitzvah.

1. Miley Cyrus Dressed As A Flower

Let's be real, she totally rocked it! Although, admittedly, I'm unsure about the flower's significance. (If there is any.)

2. And Then She Performed At The Party

Cyrus dubbed her band "Miley Cyrustein & The Super Jews." Plus, she wore this "Shalom Y'all" cape. Because of course she did.

The trio of sisters performed the traditional song...but with their own Haim flair to it.

4. James Franco Did The Hora

While Haim performed, James Franco was lifted up in his chair.

5. There Were James Franco Temporary Tats

Is this the best party favor or what? There were also temporary tattoos of Seth Rogen's face.

6. Seth Rogen Performed A Fiddler On The Roof Song

To kick off the event, Rogen dressed up as Tevye and sang "Tradition" from Fiddler on the Roof.

Jeff Goldblum dressed as a rabbi and performed a mock circumcision on Franco. Surprisingly, I'm not all that surprised by this.

8. Bill Hader Was There

The hilarious Bill Hader was in attendance and participated in the charity auction. He and Rogen signed a yarmulke that was auctioned off for $3,400.

At the end of the night, the man of the hour thanked everyone attending and excused himself from any previous childish behavior. According to Variety, James Franco told the crowd,

This bar mitzvah represents a fresh start for me. Everything I did prior to this moment I didn’t do as a man but as a mere child. Therefore, any behavior that might have been questionable at any time, just know I wasn’t thinking, I was just a boy with the cognitive capacity of a minor. I want to thank you all for coming and seeing me finally become a man.

So in that case, it's finally official. Mazel tov, James!

Editor's Note: A previous version of this piece stated that the event raised $2 million for Hilarity for Charity, when in fact, it raised over $2.5 million.