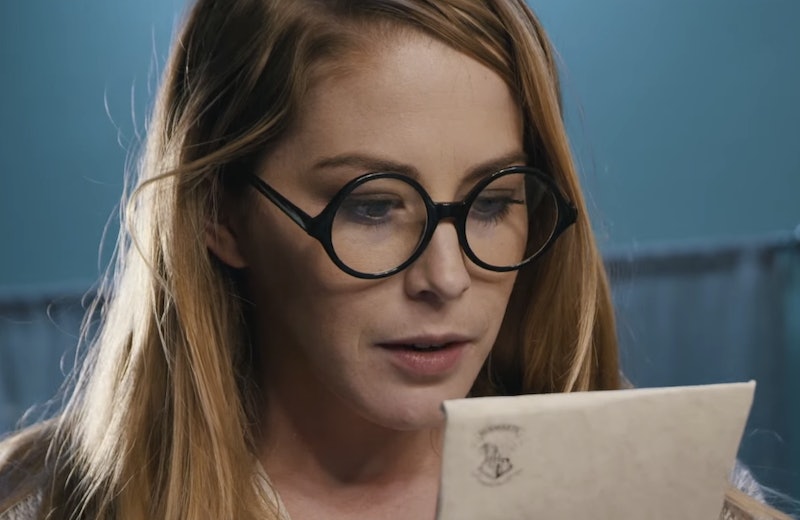 I've often asked myself — if I had the choice to go on living my admittedly excellent adult life right now, or go back in time as my 11-year-old self and start all over again at Hogwarts, what would I do? It turns out, though, that there is a much more tempting option. BuzzFeed Video's imagining of what Hogwarts would be like as a college is just about enough to wreck me on hypothetical Hogwarts scenarios for the rest of my life. Because yes, absolutely, I would ditch this planet and everybody in it to get a chance to go, even if it meant reliving the insane bacne I had at 18. (Eloise Midgen had nothing on teenage me.)

Admittedly, we'd have to factor in that Hogwarts as a college would be significantly less tame than the Hogwarts we came to know. (Well, at least the Hogwarts we came to know pre-Dumbledore's Army and people getting murdered by Death Eaters right and left. Too soon?) Just imagine everything you've come to know and love at Hoggy Hoggy Hogwarts, improved by, like, four beers and a shot of Felix Felicis. And imagine that instead of being judge-y at your peers in other houses at 11 years old, you got to be judge-y at them in adulthood — aka the prime years of side eye mastery. College Hogwarts is nothing like you've ever seen before ...

80 Percent Of The Population Are Squibs

Should have joined S.P.E.W. to round out your extra-curriculars, amirite?

Quidditch Beer Pong Is The Sport Of Choice

Need a tutorial on how to play? Get the lowdown here.

The Cool Kids Know To Never Drink And Fly

It's all fun and games until you run into the Whomping Willow.

For all the collegiate Hogwarts shenanigans your nerdy heart could ever desire, watch the full video below: