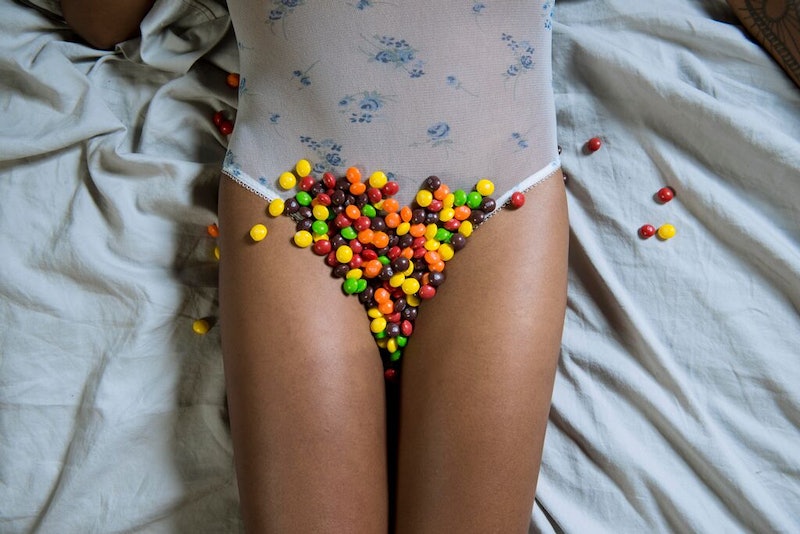 For as long as there has been medicine, there have been people who have used it as a platform to spread myths about women's bodies — to proclaim that they are gross, abnormal, dangerous, abnormally gross, grossly dangerous, and so on. Over the past few decades, society has gotten better at understanding the biological workings of female bodies — though not that good, of course (thanks, Todd "Legitimate Rape" Akin). But not so long ago, we held a lot of beliefs about women's reproductive systems that would boggle our minds and shock our vaginas today.

For centuries, the medical establishment considered the female reproductive system in general a kind of danger zone — we were thought to have the Wild West inside our wombs, if you will. Lots of medical professionals couldn't make heads or tails of what went on inside vaginas and uteruses. And as people are wont to do, doctors decided that the stuff they didn't understand was freaky and dangerous. This created a feedback loop in terms of how women and their bodies were treated. They were already oppressed and considered either weak or dangerous, which meant that their biology was also considered weak or dangerous, which then reaffirmed for many the idea that they were weak or dangerous. It's a loop we're still fighting against today, as residue from many of these thoroughly-debunked myths still colors many cultural conversations about women's bodies.

So read on and check out five once-common myths about vaginas and women's reproductive systems below. They will shock you so hard that your uterus will detach from your abdomen and wander around your body ... or it would if, you know, uteruses could actually do that sort of thing.

1. Vaginas Can Grow Teeth That Chomp Off Penises

The myth of the vagina dentata can be traced back to ancient Greek mythology, and is present in a lot of folklore around the world. Basically, it's a vagina lined in teeth, which are ready to snack upon any stray appendage that may wander in. Most theorists believe the myth to be linked to "castration anxiety" and a general fear of the power of women's sexuality — especially because a lot of that folklore ends with the hero triumphing by breaking off his ladyfriend's vag teeth and then doing it with her. Uh, success?

Though this myth is based in fear rather than fact, it is worth noting that on rare occasions, a woman can find a stray tooth in her precious flower — though not the kind that could go chomping off anyone's John Boehner. Dermoid cysts are grown from the embryonic cells that develop into hair, teeth, and bones inside the body. They typically occur in the ovaries, but if one bursts, you can end up with teeth or bone in your lady business — though this would be a loose tooth, not one that could do any damage.

3. Uteruses Can Wander Around The Body

In ancient Greece (I know, again with the ancient Greece!), people believed that when a woman felt poorly, her uterus was to blame — more specifically, that it had wandered free from her abdomen and was now making mischief in some other region of her body (kind of like a character from Gremlins). Doctors and philosophers of the era referred to it as a "wandering womb" — which, yes, is totally a great name for your band.

According to Matt Simon in Wired, ancient Greek physicians believed that the place in your body where that kooky uterus of yours wandered off to was tied to whatever specific problems you were experiencing:

If it moved up, for instance, the womb caused sluggishness, lack of strength, and vertigo, “and the woman is pained in the veins on each side of the head.” Should the womb descend, there would be a “strong sense of choking, loss of speech and sensibility” and, most dramatically, “a very sudden incredible death.”

Well yeah, of course. Who among us hasn't had to deal with the occasional "very sudden incredible death" due to our uterus banging around in our bladder or whatever?

Doctors of the era also believed that wandering uteruses could be tricked into going back where they belonged by blowing various scents at it — a practice the involved either wafting enticing smells near the vagina to lure that sucker back, or blasting unpleasant ones into the women's face so that the uterus would presumably run away, back to the crotchular area where it belonged.

Predictably, the treatments to prevent wandering wombs were engineered to keep women from getting too much power. A popular one, for instance, prescribed that women be pregnant as often as possible to keep that danged thing in place. Of course. Gotcha.

Luckily, by the 16th century, most doctors agreed that wombs did not wander — however, many of them did continue to attribute all negative emotions that women experienced to the whims of their wombs and not to, I don't know, being constantly oppressed and told that you need to stay perma-pregnant for your own good.

As I'm sure you've noticed, there seem to be a handful of common themes that keep popping up in these myths — namely, that the only way for women to stay healthy is to never be independent. The doctor prescribes 10ccs of not having any of your own hopes or dreams ... for your health, of course! And nowhere is this theme as clear as it is in old myths about women's education.

As formal schooling and education became more common in the wake of the Industrial Revolution, fierce debates raged about whether women should be allowed to learn the same things as men. Concerns about what harm would befall women if they got a solid education ran the gamut from beliefs that their future husbands might find them unattractive to worries that the stress of learning would somehow cause them to have nervous breakdowns.

But perhaps the most fascinating was the belief that schooling would prevent women from growing healthy reproductive organs. Harvard professor Dr. Edward Clarke wrote a popular book in 1873 which asserted that "[a] woman’s body could only handle a limited number of developmental tasks at one time — that girls who spent too much energy developing their minds during puberty would end up with undeveloped or diseased reproductive systems.” So once again, women were told that the only way to protect their future was to totally give up on themselves as independent entities. Got it. God, it would be funny if it weren't so sad, right?

As Kate Clancy noted in Scientific American, experiments that claimed to prove that menstruating women's bodies literally gave off poison were popular through the 1940s. The doctors performing these experiments believed in the existence of a substance called "menotoxin" — a chemical supposedly secreted by women of reproductive age that was responsible for both a wide variety of illnesses in women themselves as well as their offspring. They believed that "menotoxin" was so potent that women who were on their periods could make flowers wilt by touching them, and that menstrual blood was full of poison that made mice die when injected with it.

Of course, subsequent studies proved that menotoxin did not exist. (I mean, when was the last time you killed a mouse by chucking a used tampon at it?) But the fact that less than 100 years ago, people still believed that there was something sick or "wrong" about menstruating women shows that we're not as far out of the dark ages as we'd like to believe. Hopefully, progress on this front will continue apace — and our daughters will find the fact that people once believed in "legitimate rape" as far-out as we do the idea of a uterus that has decided to go chill in your chest cavity.

More like this
Here’s How To Deal With Sexual Frustration If You Don’t Want Casual Sex
By Annakeara Stinson and Mackenzie Sylvester
Here’s How To Reignite The Spark In A Sexless Relationship
By Vanessa Marin
Sandra Bullock, Girlboss Extraordinaire
By Matt Harkins & Viviana Olen
I'm 42 & I've Never Had Sex. Is It Too Late?
By Sophia Benoit
Get Even More From Bustle — Sign Up For The Newsletter