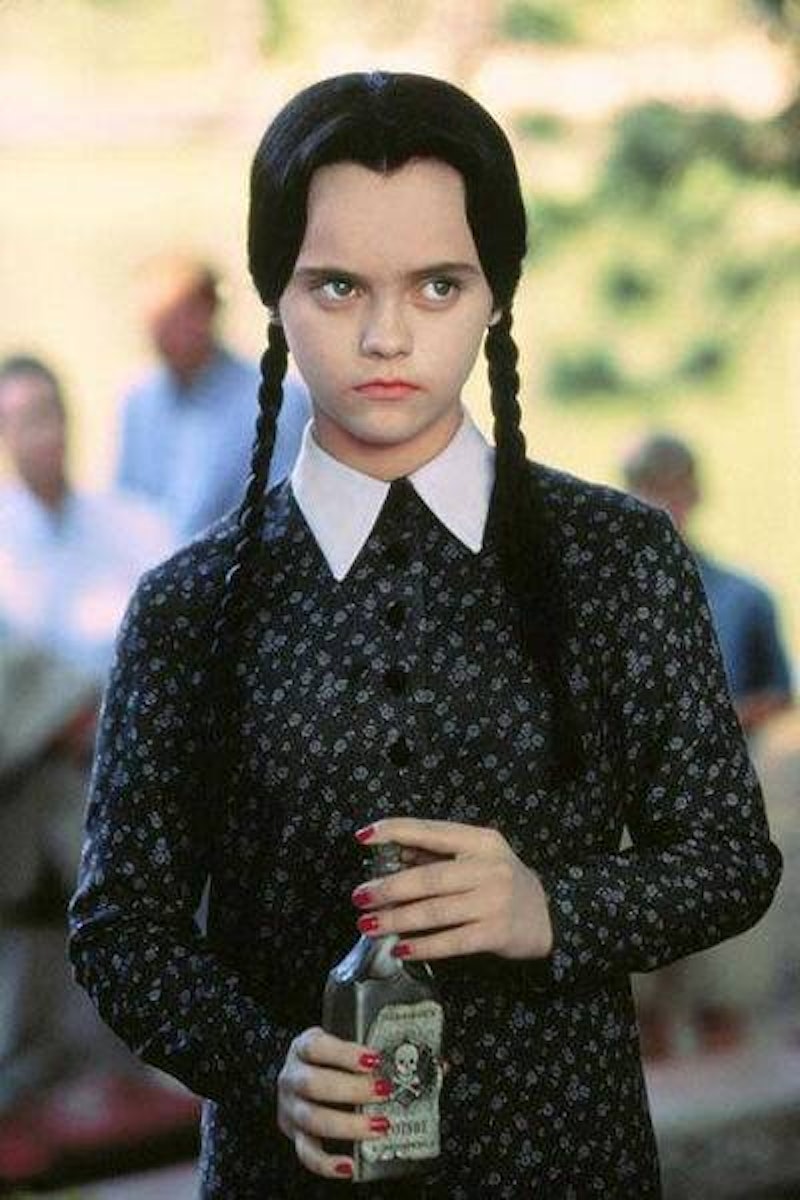 Halloween for kids in the '90s probably wasn’t that different from the Halloween experienced by kids today (Well, except that back then, we couldn’t Instagram our costumes or compare trick-or-treating hauls via Twitter). We bedecked ourselves in amazing costumes, collected candy from the neighbors, and then watched movies that were too scary for us and spent the rest of the night trying to pretend that we weren’t actually terrified. (Or maybe that was just me). But of course our costume inspirations were different — whereas kids now are outfitting themselves as Thor and Elsa, we were taking our cues from '90s TV and movies and going as Mighty Ducks and Buffy Summers.

A strange thing is that some of the costumes that were popular in 1995 have come around again to being popular now. Back then, for example, Jurassic Park was all the rage ­— who knew that twenty years later, we’d all be dressing up in couple’s costumes as Chris Pratt and his BFF Velociraptor? LIFE IS A GLORIOUS CIRCLE, Y’ALL. (Clearly the lesson is that we should save all of our costumes forever in case a remake gets made and they get popular again.)

If you were a kid in the '90s, you probably wore at least a couple of these costumes. Why not take them out for a spin in 2015?

Bedecked in a red overcoat and hat, Carmen Sandiego was the most fashionable criminal mastermind ever. (Of course, wearing this costume meant that you were doomed to have the Carmen Sandiego theme song stuck in your head for the rest of your life).

All you needed to be literature’s most elusive character (except for the aforementioned Carmen) was a red and white striped sweater and hat. It wasn’t until you actually put this outfit on that it occurred to you that you looked like a giant candy-cane, prompting you to wonder how Waldo managed to hide so easily. It’s not as if his clothes were inconspicuous.

The Star Trek: The Next Generation crewmember.

A Star Trek: TNG uniform was my husband’s favorite costume when he was a kid in the '90s. I’ve just been informed that his red costume wasn’t supposed to be Captain Picard, but rather an unnamed Lt. Commander because — and I quote — “I was trying to be modest but still have authority.”

Wayne or Garth (Preferably you partnered with a friend and did both).

Dressing as Wayne and Garth gave you and a buddy an easy excuse to blast “Bohemian Rhapsody” and repeat “Party time! Excellent!” until your parents were ready to kill you. Fond memories, right?

In the early '90s, was there anyone cooler than Catwoman, as portrayed by Michelle Pfeiffer? Her performance in 1992’s Batman Returns inspired you and practically every other girl you knew to make your own Catwoman costumes, which usually consisted of black tights, a leotard, and lots of white puff paint (for the stitching, of course).

Cher wears many amazing and quintessentially '90s outfits in Clueless, but the most iconic has to be the yellow plaid number she puts together at the beginning of the film (with the help of a computer, naturally). You wanted to wear this costume so badly when you were an adolescent, but found that (shockingly!) yellow plaid suits are not that easy to find.

Anyone from The Addams Family

When I was 12, I went as Morticia Addams for Halloween, which was the best. All you need for the costume is a long black dress, a black wig, red lipstick, and a disdainful attitude. Easy peasy. Of course, practically anyone from the film series is a ready-made Halloween win — Wednesday Addams and Cousin Itt were especially popular back in the day. (Of course, The Addams Family was around long before the '90s; it was a cartoon first, and then a TV show in the 60s before being revitalized in films in the early '90s — which means there’s a good possibility that both you and your parents got you childhood inspiration from the ghoulish comedy series.)

Underwear over your pants, guys. That’s all you need to be Doug Funnie’s superpowered alter-ego.

I have it on good authority that a plastic trashcan lid makes the perfect Ninja Turtle shell.

Petunia had to be included, obviously.

All you needed was a giant sweater and a passion for DANCE.

Were you more of a Ginger or a Spicy? A Baby or a Posh? You Spice Girls costume worked best when you were able to get a crew together to go as the whole band. Otherwise, people would see your Sporty Spice costume and assume you were simply enthusiastic about working out.

In 1995, Mars, Inc. shocked the nation by getting rid of the tan M&M and letting the American public vote for the new color. Blue came out triumphant, transforming the world of candy as we know it.

I was never that into Power Rangers, but the costumes were ubiquitous throughout the early and mid-'90s. Halloween really was morphin' time.