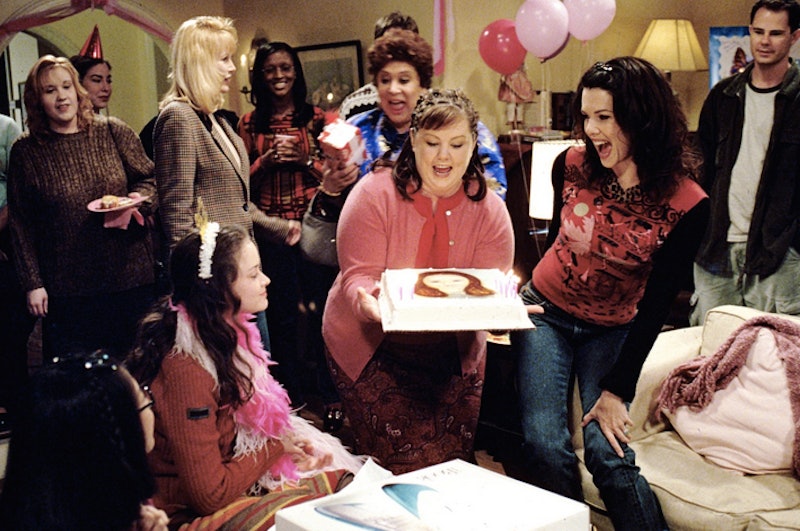 Now that it's been announced that there is a chance Lorelai and Rory Gilmore could return to television thanks to the rumored Netflix Gilmore Girls revival, fans are freaking out and speculating about what will happen and who will return. You can't have new episodes without returning characters and familiar faces popping up, right? That just wouldn't make much sense. That's why these 11 Gilmore Girls characters need to be in the revival, if it does, in fact, happen. Netflix tells Bustle that they will not comment on the reports.

Gilmore Girls was so much more than Lorelai and Rory. Yes, the story lines, drama, romance, and characters revolved around them, but can you imagine the show without the Stars Hollow residents and every other quirky character who played a part in the series? I sure can't, plus there wouldn't be a show! The other notable major and recurring characters made the show what it is and contributed to the reason so many fans tuned in week after week. What if there was no Kirk? What if Luke didn't have someone to argue with in Taylor? What if Babette didn't live next door to Lorelai and Rory? That's just pure madness.

So, if the supposed revival doesn't bring back most of the characters, well, I'm sure fans will throw a fit. With that said, if there happens to be new episodes of Gilmore Girls on the way, then these characters most definitely should be a part of them.

Duh, especially if she ended up with any of them. Also, who doesn't want to stare at Jess (Milo Ventimiglia), Logan (Matt Czuchry), and Dean (Jared Padalecki)?

There cannot be a revival without Paris. That just wouldn't be fair, now would it? Also, fans need to know if Paris and Doyle got married, had a family, and are still one badass power couple.

Are Lane and Rory still BFFs? Of course they are — or at least I hope so. Whatever the case, Lane is a Gilmore Girls staple. Oh, and it'd be nice to see Zack, too.

There's no doubt Sookie and Lorelai are still running Stars Hollow and being the most adorable pair of best friends ever, so, yeah Sookie needs be there. I wouldn't complain if Jackson showed up as well.

Did Kirk and Lulu end up together? Did Kirk ever find a permanent full-time job? Are Luke and Kirk now BFFs? These are just three of many questions that need to be answered.

You know Miss Patty is still dancing and telling her stories about being an actress, which is why she should most definitely be a part of the revival.

I need to see Taylor and Luke argue, ASAP.

Oh, Mrs. Kim. You can't exclude her. Plus, maybe the revival will finally show her husband!

Here's hoping she and Morey are super in love, have a million cats, and are still living next to Lorelai.

I don't know about you, but I need to hear T.J. yell "I'm in escrow!" sooner rather than later.

Of course, not all these characters need to return, but it sure would be nice to see some familiar faces again.