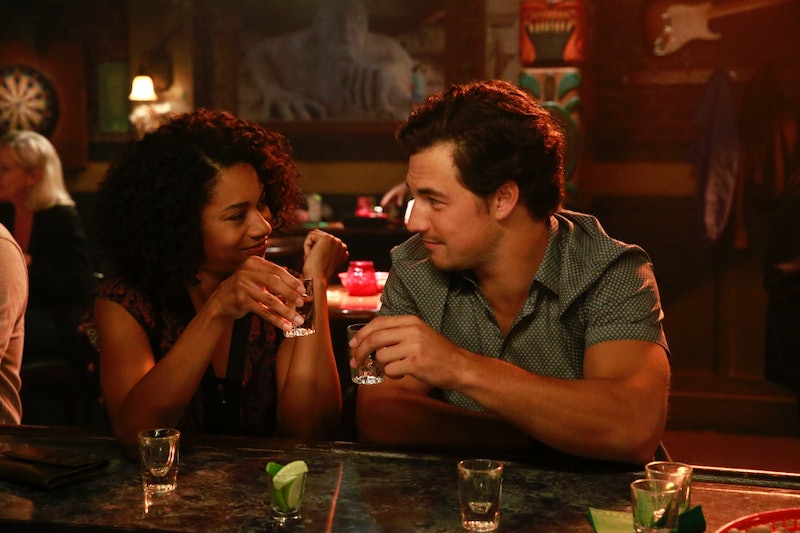 In order to keep track of complex web of relationships that have come and gone and come back again and gone again over the course of 12 seasons of Grey's Anatomy , the writers must have a binder as thick as George R.R. Martin's entire Song Of Ice And Fire series put together. Our beloved doctors have dated other doctors, they've dated interns, and patients, and — very rarely — complete outsiders. (Remember McVet?) Now, we've got one more hookup to add to the Relationship Bible: Maggie Pierce and Andrew DeLuca. What does the future have in store for this new "ship"?

We first met DeLuca at the end of Season 11, when he came to Grey Sloan Memorial Hospital with victims of the tunnel collapse, pretending to be a surgeon. Of course, it was quickly revealed that he was but a lowly intern; whoops! Thankfully he wasn't fired for this egregious misstep, since he's played by hunky actor Giacomo Gianniotti (Reign's "Lord Julien," aka Remy), and it would've been a pity to see him go so soon. The writers didn't waste any time pairing the attractive intern up this year, having him hit things off with Dr. Pierce after a particularly trying day for both of them. Last week, after trying to insist that their one night stand was a one-time thing, Maggie promptly fell into bed with him once more.

So what does this relationship mean for the show? Is this something we're supposed to take seriously? Or is this just a fun, sexy fling in service of Season 12's "lighter tone"? Right now, Gianniotti is only a recurring cast member, which doesn't bode well for the duo's longevity. But supporting players are often upped to series regulars on this show, so if it seems like audiences are rooting for the "ship," don't be surprised to see Dr. DeLuca get a promotion.

Which former Grey's Anatomy couple will Maggie and Andrew end up like?

If Maggie and Andrew are anything like Cristina and Shane, they'll hook up a few times, decide they prefer their professional relationship to their personal one, and then suddenly move to a European country with little to no warning.

Let's hope that Grey's newest "ship" doesn't end like these two: in a official complaint of sexual harassment that results in a sweeping hospital-wide policy change. (A policy change that doesn't really seem to have any practical effects just a few episodes later, that is.)

Or perhaps Maggie and Andrew will make it all the way to their wedding day... when Andrew will leave her at the altar, never to be seen again, and Maggie will cry herself to sleep in Meredith's arms. (Gianniotti better watch his mouth on set if he wants to avoid this fate.)

To be honest, Maggie and Andrew are much better suited for each other than the bone doctor and 007 ever were. George & Callie O'Malley may have been cute in an odd-couple way, but I don't think it was a surprise to anyone when they got divorced. If Maggie and Andrew make it all the way to marriage, hopefully their union won't end with Andrew cheating on her, like George with Izzie. (Ugh, and here I'd almost forgotten about the debacle that was "Gizzie.")

Then again, just because you date a subordinate doesn't necessarily mean you're doomed to failure. Like MerDer, Maggie and Andrew could go the distance, surviving trials and tribulations to end up in a rocky if loving marriage, growing (slightly) old(er) together — until one of them winds up dying in a freak car accident. Tragic.

Or they can just cut to the chase and die together in a plane crash well before they ever reach the wedding chapel. There's that possibility, too.

Or maybe Maggie and Andrew will just be a brief fling that nobody remembers in a few months anyway... like April and Dr. Stark, the creepy guy who replaced Arizona as head of Peds when she went off to Africa. Remember the uncomfortable romance between April and her much, much older boss? Yeah, I'm still trying to erase that from my memory, too.

So, will Maggie and Andrew stand the test of time? I'll let their passionate makeout sesh speak for itself: