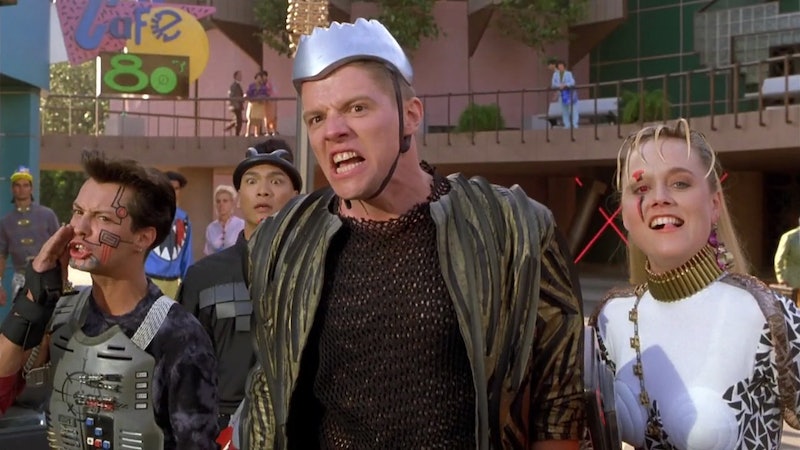 By now, you've probably already gotten word that October 21st is Back to the Future Day, the very date that Marty McFly traveled into the distant future of 2015 with his pal Doc Brown and girlfriend Claudia Wells... I mean Elisabeth Shue. The Internet has done more than its share to remind us all of this date's significance in the Back to the Future canon, instigating articles, memes, and even some pretty audacious Back to the Future conspiracy theories. But it's not like October 21st is the only date that stands out to movie fans. There are plenty of days on the calendar that have carried extreme weight on the silver screen.

In case you forgot to celebrate any of them this year, I've put together a quick run through of some of the standout dates you might want to remember for 2016. These would-be holidays celebrate births, observe deaths, and commemorate great efforts of humanity (and occasionally, of villainy)... and all from the world of movies. Check below for a quick refresher of some movie-related events that rival even Marty McFly and the Doc's Back to the Future series adventures. Hey, you might even find yourself working these important holidays into your annual party planning schedule.

The birth date of Connor MacLeod. Celebrate by dueling with an immortal Scotsman. (Highlander)

Rocky Balboa goes 15 rounds with heavyweight champ Apollo Creed. Celebrate by making one good movie, and then a bunch of other increasingly regrettable movies. (Rocky)

Phil Connors relives the same day over and over again. Celebrate by taking up ice sculpting and catching up with an old high school chum who now sells insurance. (Groundhog Day)

Joel Barish and Clementine Kruczynski meet on a Long Island Railroad platform in Montauk after having erased one another from their memories. Celebrate by getting back together with a forgotten ex, even if you know it won’t work out in the end. (Eternal Sunshine of the Spotless Mind)

Laura Palmer’s dead body is found by Pete Martell. Commemorate this loss by having a piece of apple pie and cup of coffee — black as a moonless night. (Twin Peaks: Fire Walk with Me)

James Kirk is born. Celebrate by listening to this. (Star Trek)

Five Illinois teenagers are held in their high school library for Saturday detention. Celebrate by forging an unlikely bond with someone dissimilar from you. (The Breakfast Club)

Lloyd Christmas encounters an amorous “Sea Bass” in a gas station bathroom. Celebrate by quoting Dumb & Dumber all day with your roommates, which you were probably going to do regardless. (Dumb & Dumber)

A mysterious monolith, capable of accelerating human evolution, is discovered on Jupiter. Celebrate with a little ditty called “Daisy Bell.” (2001: A Space Odyssey)

The Titanic strikes an iceberg and sinks into the Atlantic. Celebrate by casting out the socioeconomic class-instituted shackles that have kept you thus far from happiness and vying once and for all for true love! But avoid boats. (Titanic)

The students of Hogwarts come together to defeat a noseless wizard — except the Slytherins. Those evil, evil Slytherins. Celebrate by weeping over your still-lost Hogwarts letter. (Harry Potter and the Deathly Hallows)

Not actually an important date in Star Wars canon, except as it corresponds to an infamous catchphrase. Celebrate by finding the droids you're looking for. (Star Wars)

Tom Hansen finally gets over his ex-girlfriend, Summer Finn. Celebrate by doing your part to jumpstart Joseph Gordon-Levitt’s dormant career. ((500) Days of Summer)

Jenna Rink ages 17 years in a single day, only to find out that adulthood is just as confusing and anxiety-ridden as teenhood. Celebrate by staying young forever. (13 Going on 30)

Longtime friends Seth and Evan have a hard time getting to their crushes’ party. Celebrate by carrying your best friend to safety in the heat of a police raid. (Superbad)

Adventurer Phileas Fogg sets off in a hot air balloon on a quest to circumnavigate the entire globe in 80 days. Celebrate by expending a lot of effort and undue optimism toward something that is effectively pointless. (Around the World in 80 Days)

Jack Torrence celebrates Independence Day with a staff of ghouls a good two decades before he is even born. Celebrate by succumbing to the madness of writer’s block. (The Shining)

Police Chief Martin Brody and oceanographer Matt Hooper succeed in destroying a shark that has been terrorizing a Massachusetts beach. Celebrate by staying far, far away from Massachusetts at all costs. (Jaws)

The end of humanity as we know it. Celebrate with a tasty cocktail. (Terminator 2: Judgment Day)

A pseudo-celebrity from Alabama stops running. Celebrate by not running. Seriously, don’t run at all. Don’t even jog. Walking might even be too much. Just sit there. (Forrest Gump)

The birth date of both Bilbo and Frodo Baggins. Celebrate with a second breakfast. (The Lord of the Rings)

The Yautja visit the planet Earth to carry out an annual human-hunting ritual. Celebrate the fact that you have not yet become a Yautja meal. (Alien vs. Predator)

Marty McFly arrives in the future. Celebrate by avoiding the Internet for a while so that the overload of references doesn’t ruin the movie for you. (Back to the Future II)

Two weeks later, it's raining. Tell a cute guy about it. (Mean Girls)

Marty McFly arrives in the past. Celebrate by seeing your parents as human for the very first time. (Back to the Future)

A guy who looks very much like Marty McFly realizes he’s a werewolf. Celebrate with a round of harmless, wholesome van surfing. (Teen Wolf)

Ilsa Lund visits Rick Blaine’s Morocco café. Celebrate by popping in on an ex that you totally ghosted a year back. (Casablanca)

A little girl named becomes the only survivor of an attack on the colony of planet LV-426. Commemorate by naming your kid “Newt.” (Aliens)

Lewis Winthorpe and Billy Ray Valentine best the nefarious Duke Brothers at the stock market game. Celebrate by figuring out what exactly happens at the end of this movie, and then explaining it to me. (Trading Places)

Who cares about things like Christmas and Valentine's Day when you could be celebrating Back to the Future Day and May the Fourth? You're welcome.

More like this
22 Movies On Netflix That Are Perfect For The Whole Family
By Bustle Editors
You've Probably Been Saying Ibiza Wrong
By Sam Ramsden
Are John Legend & Kanye West Still Friends? The Singer’s Latest Update Is Candid
By Brad Witter
Britney Spears & Sam Asghari Called Out Kevin Federline’s Claims About Her Kids
By Grace Wehniainen
Get Even More From Bustle — Sign Up For The Newsletter