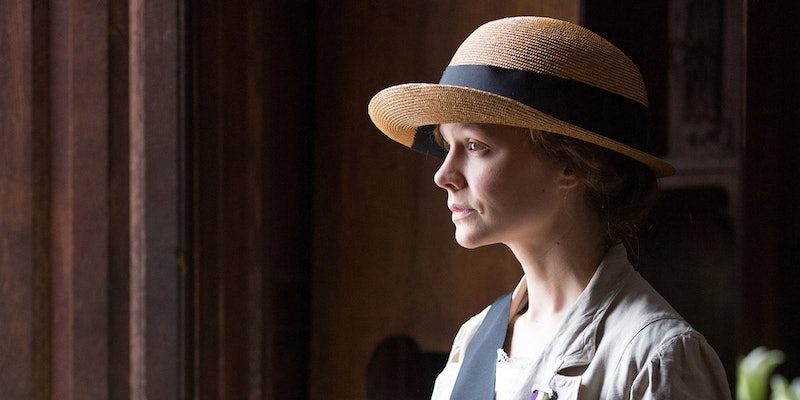 In the new historical drama Suffragette, an A-list cast pulls audiences into a volatile time in the fight for gender equality. Women and their allies lobbied for decades to win the vote in the United Kingdom, and because a two-hour feature can't tell that entire story, Suffragette tries to stay accurate by taking place within a specific time period in the early 19th century. At that point in history, frustrated activists were resorting to new, less passive tactics and facing institutional opposition at every turn. In the film's version of events, Carey Mulligan plays Maud Watts, a laundress foreman and wife and mother who finds her strength in the movement as she loses everything else. Suffragette is based on true events, but how true does it stay to the people and incidents it depicts?

Mulligan's Maud is an original character — the details of her life were sketched in part from the real memoirs of seamstress and suffragette Hannah Mitchell. Originally, the story was set to revolve around Romola Garai's character, the privileged Alice, but a more working-class heroine was decided upon. As Morgan explained to Variety, "There were not a lot of suffragette memoirs from those women because a lot of them were illiterate and couldn’t afford to take the time to write." So Maud and others in the film are amalgamations from source material that Morgan drew upon to ground the movie in the experiences of the women who lived the fight. Morgan also told Variety that some of the writing she looked at were actual testimonies from Parliament hearings that are depicted in the film.

We drew upon an incredible range of material from things like the original testimonies that we see delivered to David Lloyd George. When they opened up the records in 2002, 2003 — the public records — that was when all the police surveillance operations were revealed, and so we were able to look at some of the interviews with the women.

Then there's the character played by Meryl Streep, who makes a cameo in the film. Streep plays suffragette leader Emmeline Pankhurst, a woman real and formidable enough to earn herself a Google Doodle, and historical renown. Pankhurst founded the Women’s Social and Political Union; their slogan was "deeds not words," a mantra that appears in Suffragette more than once. As described in the film (spoilers ahead!), Pankhurst had already been arrested and held several times, but the bombing of the empty home of a prominent politician resulted in a three-year sentence for the activist. In the film, Pankhurst accepted responsibility for the crime to protect Maud and the other suffragettes who actually committed it. Pankhurst was charged for inciting the bombing, although it was certainly a group of WSU members who carried out the protest.

The film's climax features a very famous and controversial moment in the WSU's history that brought international attention to the movement. Suffragette Emily Wilding Davison was killed at the Derby 100 in 1913 when she was struck by a horse owned by King George V. Historians continue to argue over whether Davison wasn't paying attention and was simply trying to cross the tracks, if she purposely martyred herself for the cause, or if third interpretation — the one that Suffragette depicts — is the truth. Before stepping into the track in the film, Davison instructs Maud to keep fighting, and she holds a "Votes For Women" flag she seemingly intends to attach to the king's horse. Morgan explained her objective for this scene to Variety, saying: "I think what I have tried to make is a moment of reckless protest. I think she realizes in that moment that there is a potential loss of life. What I haven’t made is a suicide."

While elements of the film are enhanced and changed for dramatic effect and others are still open to interpretation, Suffragette captures the rage and fire of a group of real women who refused to be ignored.

Editor's Note: A prior version of this article erroneously stated that Emily Wilding Davison was struck by a horse ridden by King George V, when in fact, the horse was simply owned by him, not ridden.

More like this
How To Fight For Reproductive Rights, Based On How Much Time You Have
By Courtney Young
Travis Alabanza On Not Fitting In
By Sam Ramsden
Rylan Clark Is Ready To Party
By Sam Ramsden
Yinka Bokinni Recalls Terrifying Truth At Heart Of 'How To Hire A Hitman'
By Frances Stewart
Get Even More From Bustle — Sign Up For The Newsletter