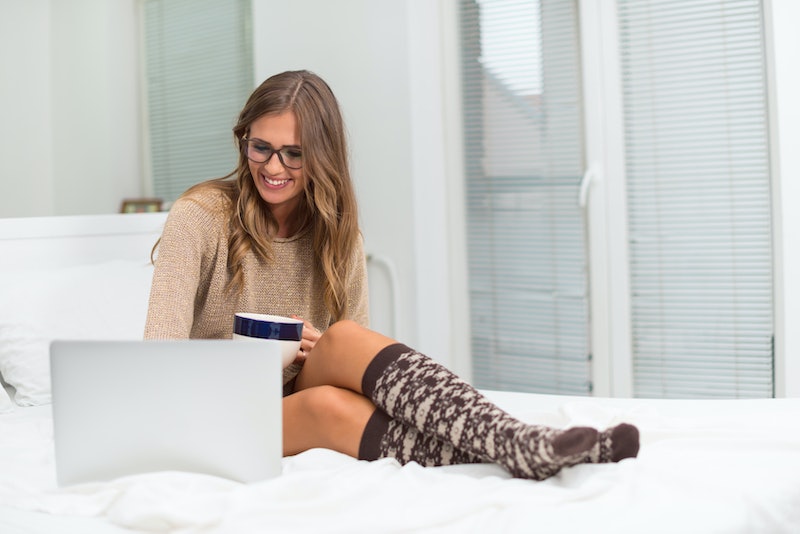 You know that feeling you get when you are just starting to date someone? You feel excited, happy, and apprehensive at the same time. If you think about it, didn't you get that same feeling when How To Get Away With Murder started? You wonder what surprising wonderfulness is coming your way. You know there will be highs and lows, and sometimes it will just feel wrong, but in a really good way, like when you spend an entire weekend investigating someone you're crushing on.

There are some people who disapprove of your new obsession and think that it's a waste of time, but you know better. You know the satisfaction of finding and watching an entire season or two, or 15 as quickly as possible.

Binge-watching is very much like dating and relationships if you think about it. Both help fill a need, and yet both can also make you feel upset, sad, and sometimes angry. When you commit to a show, it's as if you're committing to a person, and you get to experience all the feels right along with it.

Both binge-watching and dating take a lot of planning, mental effort, and an openness to the unknown. You wonder if not doing anything besides catching up with Bloodline, is the healthiest choice. And honestly, will you be able to accept Kyle Chandler as anything else other than Coach Taylor? It's as much of a challenge as trying to see the guy or girl next door as something other than your childhood friend, and more as a potential love-interest.

Sometimes the show you choose is right for you, and all is good, and other times there are complications and you have to trust your gut and believe you'll get what you need. Here are the ways in which binge-watching is like dating and relationships, because sometimes Netflix and chill means exactly that.

Remember how you felt that first semester at college? There were all those hot people, ripe for the picking, and they were everywhere: in your dorm, in your classes, and even in the dining hall. In fact, there were so many to choose from, you didn't; you chose instead to date a bunch of people. TV seasons may make you feel overwhelmed, but that's OK, you don't have to make a commitment to any of them at first. Just have fun.

2. You'll Want To Dump Some Immediately

You can sometimes get a sense right away, if a person or show is right for you. Maybe you didn't have anything in common with your date, and you thought if you saw them secretly glance at their phone one more time you'd scream, and so out of fairness to you both, you let them know, in the easiest way possible, that there'll be no second date. If a show has too much gore for your liking, or not enough action, you drop them. You aren't obligated in any way to keep seeing them (the show or the date.)

3. You've Got To Narrow It Down

Unless you're a super-player, you'll want to have narrow down the number of dates and/or shows. You have to make some tough choices, but you'll go insane if you don't. It's difficult to juggle anything let alone a bunch of possible boyfriends/girlfriends/shows to shows to binge-watch.

4. Some Relationships Are Meant To Be Short

Let's say you spend the semester studying French in Paris. You met a hot guy named Étienne, and things get very intense very quickly. You're deliriously in love, but in your heart of hearts, you know it will have to end. Some series are super short, even if they have a few seasons (I'm looking at you British television.) You can fall passionately in love with the original The Office but at only 14 episodes, it isn't that much of a time commitment. Oh Étienne, we'll always have that moonlit boat ride on the river Seine.

5. They Can Change You

Like a summer romance, there are some series that leave you feeling bittersweet and slightly changed. I felt that way with Transparent on Amazon. I don't know why, but that show changed my perspective about life, love, and family.

When you've found the right person or series, you want to spend time with them, and share everything about your new love/show with your friends, and family. You're hooked and it feels amazing.

7. Sometimes You Have To Take A Break

If you find that you and your partner are arguing all the time, or getting on each other's last nerve, you may decide to take a break from each other for a while. With TV, those breaks happen without your wanting of them. You could be completely hooked on Pretty Little Liars, binge-watching it like a crazy person, and then you run out of episodes, and the next season is almost over on broadcast television — whether you like it or not, you're going to have to wait for your fix and date other shows for a little while.

Sure, it's great when your partner gives you a special gift on your birthday, or flowers on Valentine's Day, but that doesn't compare to the feeling when your favorite show gets renewed, your friend gives you their HBO password, or you hear there will be more Gilmore Girls episodes.

When I finished watching Six Feet Under , I had to go lay down. I was as upset as if I had been dumped by someone. You get attached to the characters of a show, and they strangely become part of you.

The intensity of binge-watching bonds you to a show in much the same way that dating and relationships do with people. Anything that makes you feel and think, is good, even if ultimately it ends.

On the other hand, it's much better to re-watch a series from beginning to end, rather than over-texting or calling an ex. See? You did the right thing.