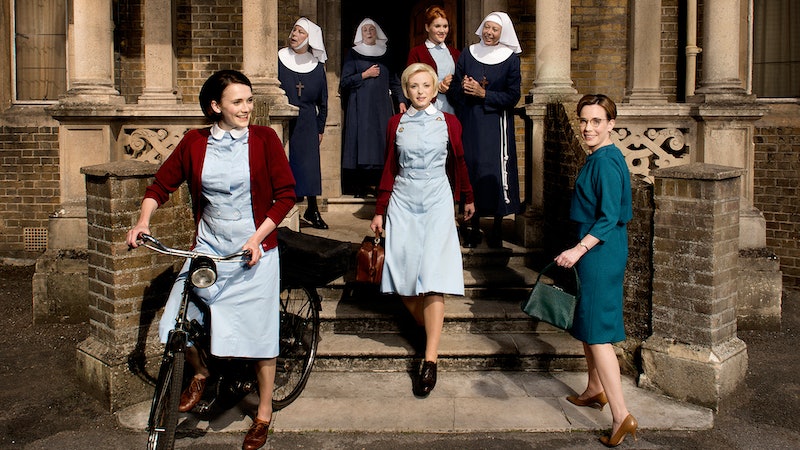 I am not ashamed to admit it: I am a British TV addict. Even though I have never stepped foot in the promise land that is England, I grew up on Fawlty Towers, Are You Being Served?, and Keeping Up Appearances. I have a subscription to Acorn TV, and I make sure all of my computers can play multiregional DVDs before I make a purchase. So...suffice to say, when it comes to British television, I am a total junkie and I love it. Lately, I've noticed my British obsession has been paying off more than usual: Which is to say, I've noticed more and more that the British TV shows I love have been teeming with awesome female characters. From midwives to battlefield nurses and high school students, women of all ages get their due on British TV.

For the purposes of this list, I'm going to assume you have already watched Downton Abbey, Absolutely Fabulous, and Doctor Who. While all of these shows are great gateway television for TV fans looking for fascinating female characters with British accents, I want to delve a little deeper here. Some of the shows on this list require an investment (an Amazon.uk visit and your credit card may be in order), but most of them are available either through streaming or good old PBS, stateside.

Call the Midwife showcases more facets of female relationships in a single episode than most shows do in their entire run. Set in a convent that houses both nuns and young midwives, the show features characters young, old, devout, and secular, all working side by side. These women support each other, argue with one another, and they tackle poverty, female friendships, race and sexuality, religion, health issues (most poignantly Alzheimer's Disease), the lasting effects of war, and so much more with grace. Through it all, the nuns and midwives ground the show with humor and strength — there truly is no other show like this one on television.

Where It's Available: Streaming on Netflix; local PBS stations

Did you ever find yourself wishing Game of Thrones' Talisa Stark had her own show? Well, she does and it is so good you won't be able to believe it exists. The Crimson Field stars Oona Chaplin as a volunteer World War I nurse who works near the front lines trying to save the wounded men who pass through the tents. She is joined by three other volunteers, as well as an established team, all of whom are there for their own complicated reasons.

Chaplin's Kitty is amazing: brazen, secretive, and unapologetically honest all at once. While Kitty is the center of the show, The Crimson Field is all about exploring female dynamics and the roles women played in WWI. The show began airing stateside on PBS in 2015, and I am already completely obsessed.

Where It's Available: PBS

And now for something completely different. Some Girls is a modern comedy about four best friends in high school, and it allows them to be every bit as messy, boy crazy, passionate, angry, and silly as real teenage girls are. The show follows Viva, Saz, Holli, and Amber as they stumble their way through their late teen years in a truly hilarious fashion. I love how this show really goes for it when it comes to allowing the girls to be as crude and funny as, say, the guys from the English series about a group of teenage boys in high school, The Inbetweeners . My only wish is that there were more than three seasons.

The Bletchley Circle is about female codebreakers. Do I need to tell you anything else? Probably not, but I will tell it is all about showcasing the strengths of four very different women, while also focusing on how women who were invaluable to the war effort were unceremoniously sent home after the war ended. The women in The Bletchley Circle find a way to utilize their skills in a post-WWII world by solving crimes. It's a thrilling two-season ride that is perfect for television series marathoning enthusiasts.

Where It's Available: Netflix

My Mad Fat Diary is the most important teen show to air so far this decade. Centered on Rae Earl, a young woman who grapples with issues like self-acceptance, self-harm, and depression — as well as friendship, love, and family — MMFD is all about making people who feel invisible realize they are seen. It is relentless in showing the viewer Rae's inner thoughts no matter how dark, petty, or wonderfully silly they are. It also tells a poignant story about two teenage girls struggling to hold their friendship together in a way that is so honest, it will make you ache.

Where It's Available: Amazon UK

The exquisite cat-and-mouse game between Stella Gibson (Gillian Anderson) and serial killer Paul Spector (Jamie Dornan) is legendary. Anderson is the very definition of an awesome woman in the role of Stella: She is a competent, meticulous, and feminist hero with her own touch of darkness. Fans of thrillers and amazing female leads should add this series to their watch list now.

Where It's Available: Netflix

So a ghost, a werewolf, and a vampire move into a flat together and the show ends up being a spot on allegory for twentysomething life. I know this sounds like the opening of a joke, but trust me — Being Human (the original) is so good, it's no laughing matter. And, while it is not as female-centric as the other shows on this list, it is overflowing with amazing women. From Annie, whose heart is matched only by her bravery, to the morally bankrupt but oh-so-fun Daisy, to the brash and funny Alex, Being Human presented a group of female characters who all have a voice — making them the masters of their own destinies, even in the afterlife.

Where It's Available: Netflix; Hulu

No other show has made me as at ease with being myself than Miranda Hart's self-titled comedy. Hart is fearless with her humor, but beneath all of the slapstick comedy is some amazing advice about embracing who you are — and every last zany bit of yourself. There's singing, dancing, lots of misadventures, female friendship at its finest, and Hart in all of her hilarious glory. Trust me, you need Miranda in your life.

Now, go forth and watch awesome British ladies being awesome. You can thank me later.