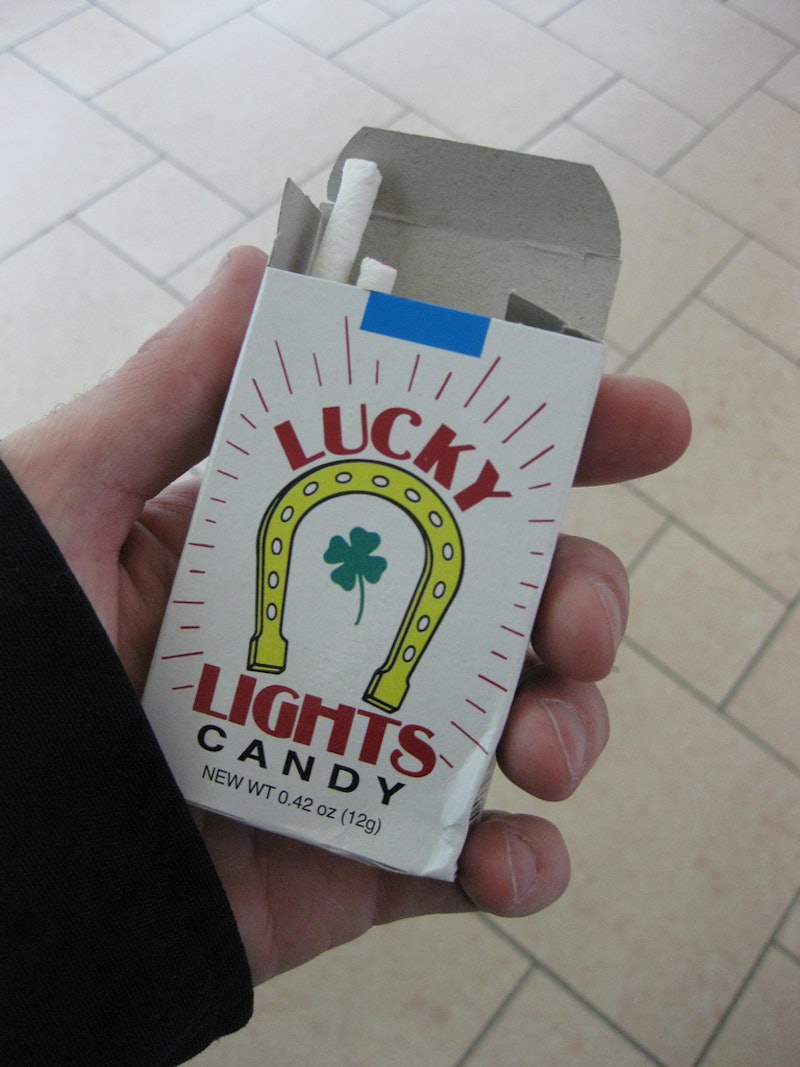 If you're looking for someone who can wax poetic about the '90s all day long, you came to the right place, buddy — I'm your gal. But while it 'twas a decade rife with "weird" things truly worthy of going mainstream, there were also plenty of things that were normal in the '90s which are considered super weird now. My, how the times do change, do they not?

Don't get me wrong. I'll happily hail the glory days when my afternoons were filled with The Fresh Prince of Bel-Air, a pack of Dunkaroos, and the latest Delia's catalog. Still, no one is perfect, and this beloved decade wasn't without its misgivings. Statistically, this makes sense — the '90s were a time brimming with cult fads and viral trends, so it stands to reason at least a couple would wind up being duds. Do I still adore many of these things now largely acknowledged as bizarre? Yep. You might also, in which case give me some skin, sistah friend. '90s kids of the world, unite! If not, that's cool too. I'd probably still finish a game of Jumanji if it meant springing you from some eternal jungle.

Whether you dig these things or not now, though, you most likely loved them in the '90s. We all did. It was like the world's biggest case of mass hysteria. I mean, weird those these things may be now, no one would have batted an eye over them back then — and we wouldn't have it any other way. After all, you can take the girl out of the '90s, but you can't take the '90s out of the girl.

Now mainly relegated to random wedding receptions that have lingered long enough into the night for things to reach drunken YouTube video status, the Macarena was the dance back in the day. If you didn't know how to do it, you were essentially a social pariah. Our worlds have since been rocked by the revelation this catchy little ditty is about a woman who cheats on her boyfriend with not one, but two of his friends. Fun times.

I made the mistake recently in a room full of young Millennials of blowing into the DVD player when it froze. Aside from the painfully embarrassing stares I received, perhaps more mortifying yet was trying to explain the sound logic behind using my breath to fix a technological glitch. (Obviously, the momentary embarrassment did not deter me long-term — I remain convinced my breath has magical healing properties, like a unicorn.)

3. Adding WordArt to Everything

Somehow, I don't think educators and employers in this day and age would be nearly as pumped to receive as a document adorned with squiggly, two-tone WordArt as I was to hand such masterpieces over back in the '90s. Today, this is basically akin to using Comic Sans.

Ew. Why was this a thing again? I remember it being all the rage back in the day — everyone who was anyone had a lucky rabbit's foot in their possession at some point or another. I personally had a set of these beautiful bunny toes dangling from my key chain. Which brings me back to my original point: Ew. Also, poor things! We were monsters!

Before the flip phone or the smartphone or any other mobile phone came into fashion, the cool kids all roamed the halls with pagers or "beepers" affixed to their belts. My BFF had a see-through teal one, and it gave me life goals. Thankfully, Motorola saved me from myself by eventually ceasing production of these suckers. If someone were to show up with a pager today, we'd have to assume they were a doctor. Or a time traveler.

Between MASH and Fortune Teller, nary a decision in our life wasn't mapped out by sheer luck of the draw. At the height of popularity, one could hardly be expected to decipher which boy she was crushing on without first consulting the sacred formula for fleeting happiness living without the lines of wide-ruled notebook paper. Somehow we find this strange today. After all, we've got online quizzes to reveal our destinies now.

While this game may have originated in Hawaii in the '20s, '90s kids took it to the next level. By the time they faded into relative obscurity, more than one inter-friend-tion had been held to salvage friendships on the brink of destruction due to these little circles of cardboard. This obsession will surely puzzle future civilizations for generations to come.

The fact that this expression was, for all intents and purposes, totally nonsensical did nothing to sway our over-usage of it. Any argument could be silenced with these four words. It was the shutdown to end all shutdowns. Until, that is, the '90s ended and everyone realized just how weird this slang (and our love of it) really was.

Did we even realize what we were doing? I remember my cousin and I riding our bikes to the tiny gas station two miles down the road from our house just to get our hands on a pack of these faux cigarettes. I don't know about you, but I kind of feel like this '90s fad should have been considered weird even then.

People today are — for the most part — pretty grounded concerning the end of the world. Most of us simply accept that it'll happen some day, but that day isn't today. In the '90s, though, we spent a virtual decade counting down to the doom that would inevitably strike the Earth the minute we rang in the year 2000. These days, aside from your casual doomsday preppers, this kind of fanatical (not to mention illogical) behavior would likely land you some serious side eye.