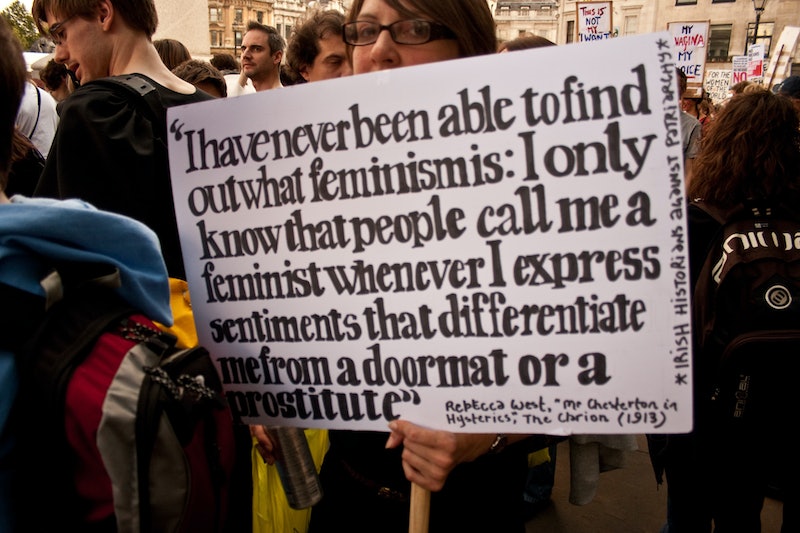 "I'm not a feminist, but I believe in equality." "I'm not sure if I'm a feminist." "I don't quite understand feminism." If you say these things, are you a feminist in reality? You might be one without realizing it.

Many of us learn stereotypes about feminists that make us dissociate ourselves from the label. These stereotypes run the gamut from "feminists hate men" to "feminists devalue feminine women." But as I've learned from living and working among feminists, these stereotypes are based not on most feminists, but on myths spread by anti-feminists who want to build straw men (or, more accurately, straw women) so they have an easier time tearing them down.

Or, sometimes, we may encounter a bad apple or two that spoil the barrel. As a teenager, I was in my high school's women's rights club and did a project on how the media promotes violence against women, yet I insisted on calling myself a "humanist" because some of the feminists I knew made essentialist claims, like "war exists because men are running our governments" and "women are more nurturing," which I found to pigeonhole women rather than free them.

Ironically, when I got to college, it was feminist theory that taught me gender is a social construct and we are not defined by what chromosomes we have or how feminine or masculine our self-presentation is. Since then, feminism has given me not only more comfort with defying stereotypes but also an understanding that a woman's respectability has nothing to do with her clothing or sexual decisions, that consent is essential for any interaction between people, sexual or otherwise, that I am never asking to be sexually harassed or assaulted, that our idea of what constitutes a desirable body is influenced by societal power dynamics, and more — the list goes on.

As this story illustrates, there are some internal disagreements within feminism, but we usually share similar motives and a few key beliefs, and ultimately, feminism can help you regardless of what kind of feminist you are. Here are some signs you could be a feminist without even realizing it.

1. You're Sick Of Stereotypes

If you're a man, you may be tired of feeling like you have to be strong enough to carry things for women, like you can't cry, like you're supposed to be aggressive, or, if you date women, like you always have to make the first move. If you're a woman, maybe you're sick of being told you're too loud or pushy or of feeling like a freak just for being a sexual person. If you don't conform to either gender, maybe all the pressure to do so is really trying you. Regardless of what your grievances are, feminism seeks to create a culture where it's okay not to conform to gender roles no matter who you are.

2. You're Angry About The Media

Feminists tend to support LGBT rights, and LGBT rights activists tend to be feminists. There's a reason for that. Both movements aim to make it more acceptable for people to defy gender stereotypes and live the lives that make them happy, not the lives society tells them to live. If you believe someone's gender shouldn't determine who they can date or marry and you believe someone's biological sex shouldn't limit their gender expression, you probably believe these traits shouldn't determine how people are treated in any regard.

4. You're Sick Of Women Being Judged

Feminism strives to combat our society's harsh judgment of women — for their clothing, their sexual decisions, the way they talk, their relationships, their parenting choices, their careers, and pretty much everything else they do in life. While feminism may focus on defending the women who are judged most harshly, such as those who choose not to be parents, feminists don't want anybody to feel judged for their personal decisions as long as they aren't hurting anyone.

Here's a test from comedian Aziz Ansari (detailed in the video above, which you should watch in its entirety because it's delightful): "You go to a Jay-Z and Beyoncé concert and you're not like, 'I feel like Beyoncé should get 23 percent less money than Jay-Z. Also, I don't think Beyoncé should have the right to vote, and why is Beyoncé singing and dancing? Shouldn't she make Jay a steak?" In other words, if you want women to be compensated fairly (because the wage gap is real), to have equal participation in their government (yes, women can vote now, but they're still extremely underrepresented in politics), and to be allowed to do what men do, you should be a feminist because that's what feminists are striving toward. And, for the record, feminism's advocacy for women is due not to the belief that women are superior but to the knowledge that women and gender-nonconforming people are currently treated in an inferior manner and need to be lifted up to achieve equality.

6. This Quiz Tells You You're A Feminist

In case there's still any doubt left, Pulptastic created a quiz to tell you if you're a feminist, and it only has one question: "Do you believe women and men should have the same political, economic, cultural, personal, and social rights?" Indeed, no matter what dictionary you ask, feminism boils down to gender equality: Dictionary.com says it's "the doctrine advocating social, political, and all other rights of women equal to those of men." And Merriam-Webster calls feminism "the belief that men and women should have equal rights and opportunities." Yet there seems to be a misunderstanding about this — because 82 percent of people believe "men and women should be social, political, and economic equals," yet only 20 percent call themselves feminists. If you don't believe the dictionary, then, believe Emma Watson:

And Beyoncé (or, more accurately, author Chimamanda Ngozi Adichie as sampled in the Beyonce song "Flawless"):

You may not agree with every feminist about everything, but if you care about gender equality, it is simply accurate to call yourself a feminist. And that's something to be proud of.