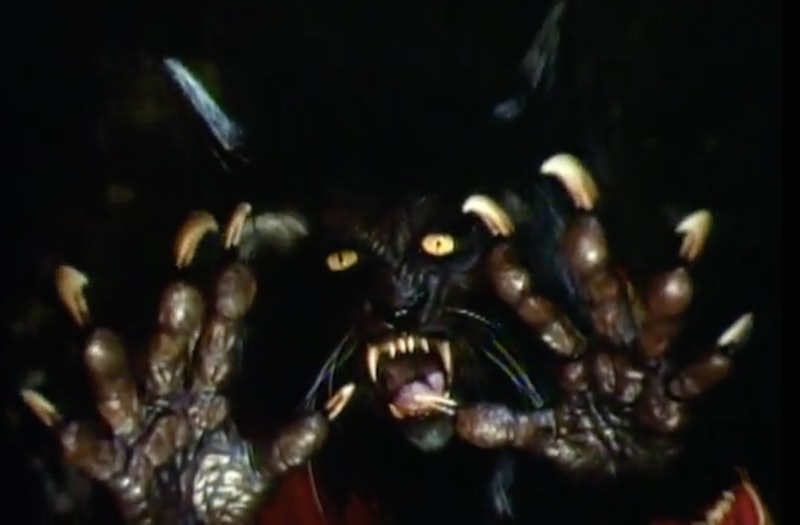 To date, I’ve made maybe four or five Halloween playlists, a constant necessity since you can’t get into October without the proper music, amirite? In fact, there’s no shortage of Halloween music for you to queue up at your next Dead Man’s Party or Coven Gathering. But, if you’re a little more visual (or perhaps left without plans), maybe you just want to settle down with some super (or ok, mildly) scary music videos. Now, I get it, not all of you can be Mary Grace, Princess of Darkness. Not all of you grew up in a town where everyone's boyfriend was in a Misfits' cover band. I understand.

So, the compromise I had to make with myself was "don't bring in things that are too obscure" and "don't cross level of scary that'll end with you being too afraid to sleep tonight." Because, you know, there are leaps and bounds between everyday Rob Zombie spooky and Tool. Leaps. And. Bounds. In short, I plucked out music videos I thought exuded creepiness without rendering you with a week of sleepless nights. You're welcome.

Here are 13 spooooooktakular music videos that'll really give you those "Hot Topic in 2007" vibes you look for this Halloween season.

You know how all adaptations of Roald Dahl books are way too scary for childhood? Well, long before he was churning out "The Beautiful People," and even longer before he became a sad clown, Marilyn Manson tapped into that twisted Dahl-ian terror. I love "Dope Hat" because it's clearly a take on that nightmare-inducing boat scene from the original Willy Wonka and the Chocolate Factory and those bright pops of color make it fun for the whole family (except not at all).

This is far from Nine Inch Nails' best or scariest music video (more on that later), but I'm putting it here for the way it makes spoooookiness into a caricature.

Creature Feature, son! The ultimate Halloween band! No? Not ringing a bell? Well, OK, the point is that Creature Feature is basically what a gang of satellite Addams cousins would sound like if they joined a family band. I'm about it.

Again, Zombie as an entity produces nothing but Halloween-perfect music, but I'm partial to this one. No frills, just a straight-forward ode to The Cabinet of Doctor Calgary.

You know how sometimes you're all snuggled up in bed, waiting for the calming lull of sleep to take you into dreamland, when all of a sudden a web-covered Robert Smith stares at you from the ceiling? Well, now you'll know how it feels. So melodic, though.

6. Siouxsie and the Banshees — "Spellbound"

Where my witches at? "Spellbound" is an essential part of every witchy sisters' mix tape, and don't you forget it.

I'm gonna peg it as Halloween appropriate because of all that fog, and the fact that there's not enough songs about gothic literature.

Speaking of which, I love the Miss Havisham feels I get from "Hope Your Dreams Come True." I know you don't know Daisy Chainsaw; just sit back, enjoy the tarot card readings, and never feel OK again.

Somehow, the bright colors here push this off into a territory where it's an unconventional choice for a Halloween vid. I mean, as a song, it doesn't ring "Halloween." But the inside-out angel! There's enough in here to give you the wiggins.

While the bright colors in "Heart Shaped Box" work against it in terms of scariness, the neon-everything look works for "Black Hole Sun." Here is an absolutely gut-churning look at suburbia on an acid trip... a thing I personally do not have experience with, but I would imagine would look something like this.

Still the most '90s music video of all time, yet an ideal pick if you're into the "scary little girl" trope.

Hey, it's your favorite Nine Inch Nails song! And, likewise, it's accompanied by one of the most well-done music videos of all time. With the grainy found-footage look and the avant-garde imagery, "Closer" is in a league of it's own. Disclosure: I did once watch this video once at 2 a.m. and just decided, on a whim, not to sleep that night.

Oh, come on, throwing all mallgoth cred to the wind, you have to include "Thriller." I'm not a monster, after all.

And there you have it: a hefty sampling of music videos that are sure to make your Halloween an absolute scream.