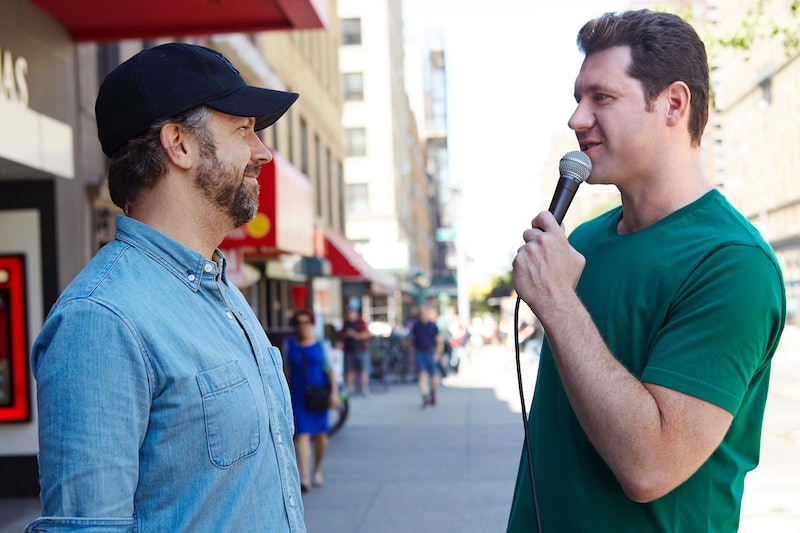 Billy Eichner has done it again, and, by done it again, I mean graced the street with his presence and made the world a better place. Case in point: the most recent episode of Billy on the Street , wherein Eichner and Jason Sudeikis ask important life questions such as, "For a dollar, true or false: Masculinity can be a prison." All of this, of course, features Eichner's newfound bro mannerisms, vernacular, and items of clothing (jersey, backwards hat, etc). Eichner rolls up with his squad of bros and, in an alarmingly non-Eichner voice, spits the following line: "Hey bros, what up, it's your boy Big Bill!" And, already, this is shaping up to be my favorite Billy on the Street skit, ever.

Big Bill and his pack of bros proceed down the New York streets, aggressively asking innocent people irrelevant questions in their self professed "Bro-lightening round." Questions involving mostly a) musicals, b) Driving Miss Daisy, and c) Which cast member from Veep is the most desirable to sleep with ("You don't like Julia Louis Dreyfus, bro? F*ck that bro! Julia Louis Dreyfus is the sh*t, bro! ... What about New Adventures of Old Christine, B*tch?!") Personal favorite line however, was this: "Hey bro, bro. For a dollar, are we good bro? We good?" Solidified. It's my favorite episode of Billy on the Street, ever. (Elena, you're still a close second.)

Eichner and company continue their ridiculous questioning with lines like, "Hey bro. For a dollar, in 2015, did you crush it or did you kill it?" An unsuspecting gentleman kindly answers this one correctly, saying "I crushed it." Big Bill and his bros, happy with this answer, vehemently rejoice. "Yeayuh boy! F*ckin crushed it bro!!!" This is GOLD, I'm telling you. Stay tuned for the end, when the bros host a tailgate for Wicked. Yes, seriously Wicked. The Broadway show. Complete with more face painted bros, Big Bill doing a keg stand, and Idina Menzel frisbees.

In essence, this skit was perfect. I'd even go as far to say that it was the best bro-parody there ever was. The only thing missing was more lines from Sudeikis, but Eichner really carried this one home, so I'm not mad (bro). Check out the full sketch below.