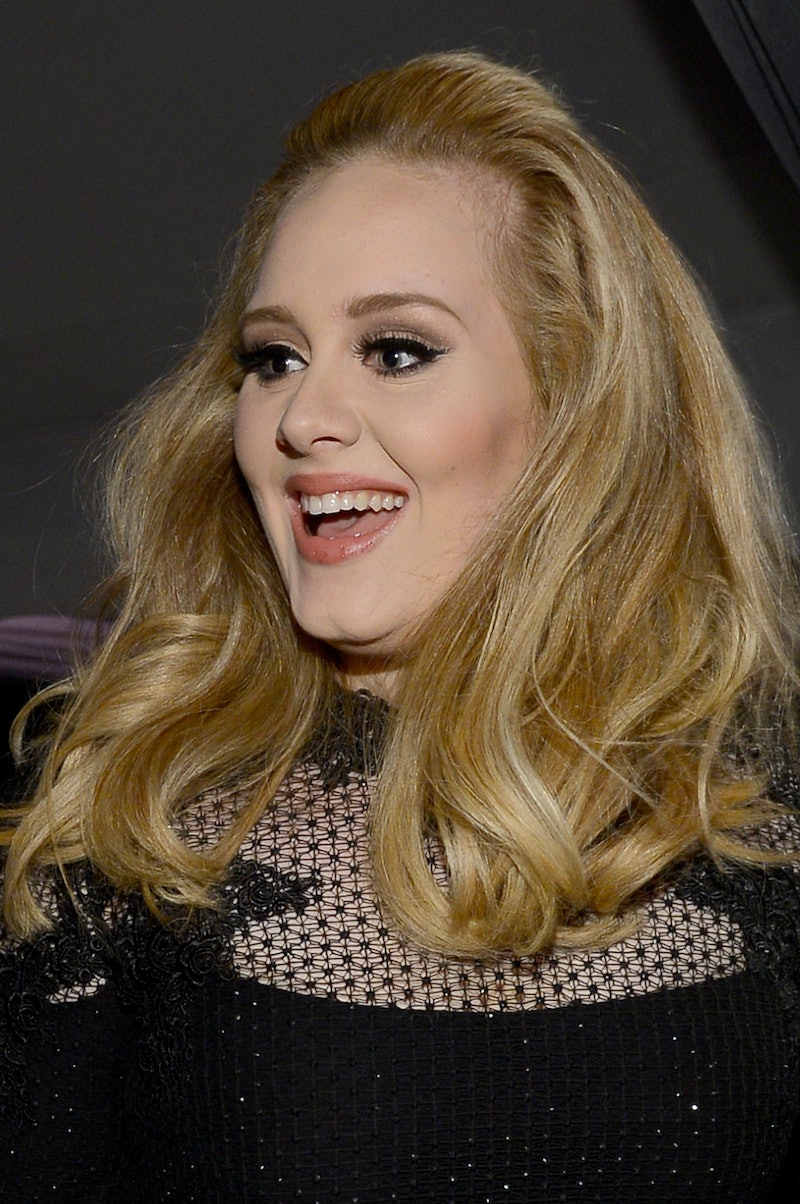 Adele is not only a powerhouse of a woman with enviable Betty Draper-esque hair. She's also an icon when it comes to body image. Adele inspires body positivity not only because she shuts down any suggestion that she alter her physique for a more standard Hollywood silhouette, but also because of the way she does it. Adele can often be found dismissing the topic entirely with finality and complete disinterest. She's not struggling with body positivity. With her, it seems like she never lost it. Women like Adele help me change the tone of voice I exude internally when looking in the mirror. Sure, I still have the occasional, "Why did I eat that whole box of doughnuts?" monologue pop up now and again as I'm buttoning my jeans, but it's met with a stronger, more assured voice that goes, "Why do you even care?"

That's not how it always was, though. For the longest time, I used to get out of the shower and avoid looking in the mirror. With hair dripping, I'd quickly glance at it to see if it was fogged over, and then I'd keep my eyes on my kitschy bathroom rug as I'd towel off my legs and make a grab for my robe. I didn't necessarily not like how my body looked, but every now and then I'd nit-pick. Some days I would throw myself a wink as I'd belt my robe, and others all I could do was groan. That groan was what I was trying to avoid, though, so I kept it safe rather than sorry by flying out of that bathroom like I was being timed.

But things are beginning to change now. I'm learning to be... not forgiving about my curves, but unworried about them. To forgive means that something wronged you, and I have no ill feelings towards all the cupcakes and sugary cocktails I spent time with in my life. I have no regrets, so what is there to absolve? Instead, I just want to look in the mirror, throw a finger gun at my reflection, and get on with my day. That's where Adele steps in.

She's just so wonderfully unbothered by how inspiring she is in regards to body positivity. When she talks about her curves, she always seems certain that to try to change would be a waste of time, mostly because she doesn't need to change in order to accomplish everything she has the mind to. In a Jan. 2013 interview with Anderson Cooper on 60 Minutes, Adele shared her attitude on losing weight. "I’ve never seen magazine covers or music videos and been like, ‘I need to look like that to be a success.'" And when you think about it, it's just so true.

Often when we're talking about body types, the conversation is skewed toward this belief that if you were skinnier, you would be happier. You'd find love. You'd have enough confidence to make your dreams happen, and feel entitled to lead that life you always wanted. But what, exactly, does a thigh gap have anything to do with that? How would a smaller waist size promise you success? Why can't you just make all that happen now?

Essentially, I think that's Adele's point when she makes unworried remarks about her curves. Her figure never stopped her from catching her dreams, finding love, or working with her art, and it shouldn't stop anyone else from doing the same. It's not like your jean size is the main obstacle between you and, say, gathering enough courage to quit your temp job and begin working towards a new goal. It's not like the number on your clothes tag is stopping you from saying hello to that cute person over by the bar, or telling you you have to wait until you've lost a few to travel. There's no physical barrier that tells us we have to whittle down to a certain number in order to have a beautiful life — except the one we make for ourselves.

In Adele: The Biography, Adele spoke about body positivity in the form of taking control of your identity. She pointed out, "Being told how to look is about being a product, and I don't want to be a product." If we all become mirror images of one another, we won't have to go through the discomfort of sticking out, sure. But we'll lose something special along the way: Ourselves. To groan and wish we could look differently is to follow the crowd, and that's kind of the lazy way out. Adele's helped show me that I don't have to be among the masses of humans sighing in changing rooms, feeling guilty when they glance in a bakery window, or running out of the bathroom when the fog clears. The size I am now — no matter how big or small — has nothing to do with my success or happiness. That's all me.