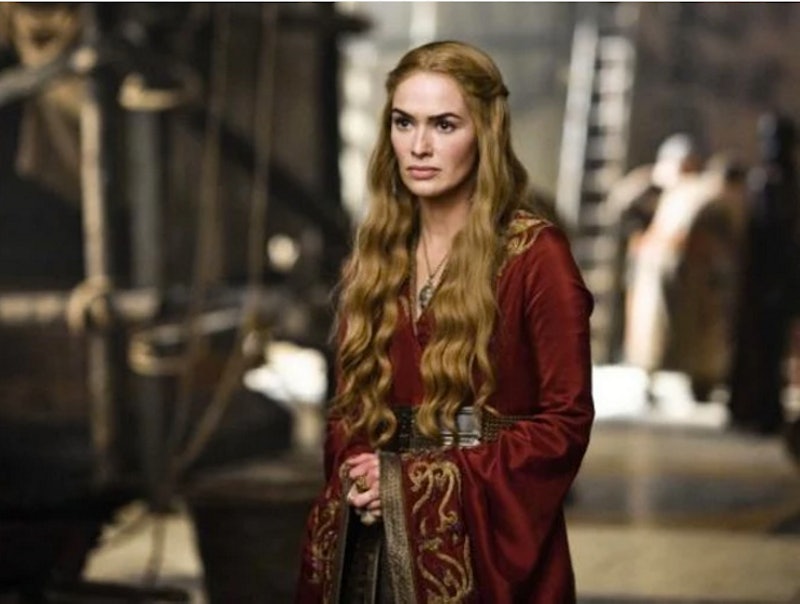 Halloween is the one night a year where ghosts, goblins, monsters, and Jon Snows collectively take to the streets. If you’ve so much as gone for a walk outside on Halloween in the past few years, it should come as no surprise that the popular book series turned HBO phenomenon Game of Thrones is ripe with major Halloween fodder. While many of us want to sport a costume in the pop-culture zeitgeist, there is one Game of Thrones theme you’ll probably want to avoid this Halloween — and no, I don’t mean dead Jon Snow, go crazy with your special effects. I am talking about how you shouldn't be naked, shame walk Cersei for Halloween.

Let’s really think about that costume, which has been circulating online, and its implications. You would dressing as a woman stripped naked, tortured, bloodied, smeared with waste and garbage, and forced into public humiliation to a degree that evokes further emotional and physical abuse. Sorry to get heavy, but this is a very heavy subject that should be considered before you purchase a nude suit, fake blood, and a blonde pixie wig.

It is easy to get carried away with a costume — which is why there are so many inappropriate Halloween costumes making news every year. Halloween is the time to be outrageous, after all. But, there is a fine line between being satirical and being offensive. Fans of the show may simply want a new outlet for a costume that is in the now and a reflection of the latest season. And, let’s face it, many people don’t like Cersei. But, that’s not enough of a reason to make light of violence. Cersei is fictional, but you never know who may see your costume and feel something very real.

When you put on a costume, it is important to consider not just what it means to you, but what it means to the people who are going to see you on this very public holiday. The way we depict other people and their struggles, should be handled with empathy and sensitivity — even when considering popular, fictional characters. That scene was hard enough to have to watch, it's not OK to replicate it as a joke.

If it’s the nude suit that you like about the costume, you can try The Birth of Venus. If it’s the pixie cut, maybe go as a pixie? Or go as the Cersei that leaves you feeling empowered. Whatever you do, don't do walk-of-shame Cersei, because abuse, brutality, and degradation of women is something that exists beyond Westeros, and it shouldn't be turned into a costume.