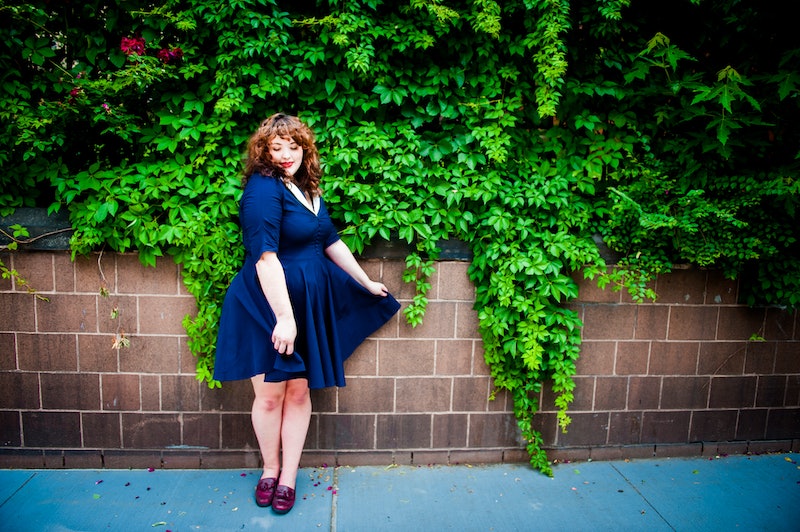 I started blogging about size acceptance before I started blogging about fashion (or, more accurately, fatshion). Craving a platform on which to speak about how ridiculous I found the fact that French rock climber Alain Roberts was scaling skyscrapers sans equipment while I was being tormented online for daring to say "I love my fat" because, "O.M.G. it's so unhealthy and so dangerous and you're going to kill yourself," I decided to create my own.

For a while, I focused exclusively on tackling size acceptance through essays and op-eds (albeit the amateur ones of a college senior), covering everything from Ralph Lauren going plus to folk music's correlation to fatness (both of which, IMO, have a social justice element to them). But I left out my own fashion entirely — fearing on the one hand that I wouldn't be taken as seriously if I expressed my fascination with tutus and tiaras, and on the other hand being totally reluctant to dabble into an industry that was at least in part responsible for the need for a size acceptance movement in the first place.

Somewhere along the way, however, I realized that fashion didn't have to be oppressive. I also realized that being interested in it didn't make me any less worthy of being listened to. I discovered the online community of plus size blogging and body activism, in which individuals were reclaiming the word "fat" as something beautiful and empowering, and I knew I had to be a part of it.

Fast forward three years, and I've learned a ton from the world of fatshion. When I started considering joining this community, a lot of people told me that blogging under the umbrella of all things sartorial would be a trying experience; one riddled with shallowness and unnecessary vanity. But here are seven things no one told me about fatshion blogging that I think are a little more worth highlighting.

1. The Solidarity Is Out Of This World

I've never been good at making friends. A combination of social anxiety and inherent quietness has left me — more often than not — sat alone on the metaphorical and literal bus. Never in my life have I encountered the solidarity of the fatshion and body pos communities, though.

Fashion holds a lot of power. Even the person who swears, "I don't give a sh*t about clothes," likely prefers certain styles over others. And through those styles, that person conveys an element of their personality to the universe (including that IDGAF attitude). Sometimes fashion is just about the pretty clothes, sure. But sometimes it's a little bit more than that.

I'll never forget a lecture I attended earlier this year by Adipositivity photographer Substantia Jones at The New School in New York City. There, she told us that "fat fashion is a political statement." Through fatshion, we create (and demand) visibility. It's not just about pretty clothes. It's about the need for equal representation and equal options. When fat women post photos of themselves in bikinis, they're very rarely doing it just to show off that cute bikini. More often than not, they're doing it for the fight towards visibility.

3. You'll Remember Why Fashion Is So Powerful

In addition to utilizing fashion as a political statement, there's another empowering element of fat fashion worth noting: Its ability to induce self love. Fighting for the representation of an entire marginalized community is always going to be a noble cause. But fighting for one's own self love? That's no less important.

It's far too easy for fat women (as well as fat men or non-binary individuals) to get sucked into the "I am not enough" bubble. For the majority of people outside of feminist or body positive spheres of thought, fatness remains a big, terrible, awful "epidemic." We're literally told that we are an illness — a problem to be dealt with — on the daily. And when the world of retail doesn't even acknowledge our existence? It's like further proof that we don't matter.

When you delve into fatshion, however, you realize that hundreds of folks are using all those so-called sartorial rules to fight back against this idea that we are broken or unworthy. Through fatshion, we can find a way of connecting to our bodies and our beings in a way that mainstream retail hasn't always been conducive of. Ultimately, taking that power back always leads to a little more self-assurance and self-validation.

So, yeah. That fast fashion store's plus size section probably has 10 items hanging on its racks compared to the 1,000 hanging all over the rest of the shop. And that department store likely thinks "plus" ends at a size 18. Mainstream retail — which IMO consists of mall shops, fast fashion, and Fashion Week runways — isn't yet catering to us that much. But indie retailers and designers? You better believe they're revolutionizing the industry.

Had it not been for fatshion blogging, I never would've come across the brands that are actually doing things right — brands that are breaking every plus size fashion no-no and creating their own rules. From Chubby Cartwheels to Re/Dress NYC to Monif C to RebDolls to Rue107, fatshion opens up a world of indie clothes available with the click of a button. Not only will you be supporting designers who actually give a sh*t about creating beautiful, high quality clothes for fat babes, but you'll likely be presented with all the sartorial genres you've always wanted to dabble in, but never found available in size fat.

5. There Are So Many Intersections

I've never really met or come across a fatshion blogger online who didn't use their platform to voice other relevant issues surrounding body politics or the world at large. From those like Glitter And Lazers who post #OOTDs alongside #fatyogi images that combat stigmas surrounding size and health/fitness, to others like Ragini Nag Rao of A Curious Fancy who have used their platform to discuss size's intersection to mental health, most fatshion bloggers do a remarkable job at utilizing fashion for the greater good.

The thing about clothes is that — to a degree — they're one of the few universal sources of interconnectedness the world has to offer us. Think about it: Most of us wear them. We buy them, we worry about them, we love them and hate them in equal measure. This, in and of itself, makes fashion bigger than hoop earrings and leotards. It makes it a vehicle for discussion. With the help of a lot of fatshion bloggers, we get to see just how many opportunities for discussion fashion can actually incite.

6. Fellow Activists Want To Engage With You

One time I wrote about Gabourey Sidibe being a total fashion icon, and she then thanked me for it on Twitter. Although this was enough to bliss me out for the next 24 hours, Sidibe's willingness to interact with fans and fellow proponents of fatshion and body positivity isn't super rare. Whether we're talking about OG plus size blogger Gabi Gregg or an Academy Award winner, I've found that nine times out of 10, people will engage with me on Twitter.

I don't know if this stems from solidarity or from being in a position where they understand marginalization, but high profile fatshion and body pos activists — from my experience — seem so much more willing to engage in discussion or shoot over a simple "thanks" when something is written about them than any Kardashian I've ever tried to tweet. This kind of interaction is so crucial for the continued dialogue we need when it comes to tackling sizeism.

7. The Need For Size Acceptance Will Become 100 Times Clearer

However, chances are you won't do that. Chances are that every time you get one of those emails from someone who thinks your lingerie photo is the most heinous thing to hit the Internet ever, you're going to be reminded of why you started blogging in the first place. If we were to tally things up, I'm sure there'd be more people in this world afraid and disgusted by fat than those who aren't. It's that simple fact that will remind you that size acceptance is important. And if there's any role you can play in achieving it, well, that's a damn good use of your time.

So, yeah. Fatshion has its downsides. The community isn't perfect — and sometimes we bicker about terminology or other silly things that are probably petty in the long run. But you know what? Fatshion is f*cking changing things. And when you find yourself a part of that? It'll ultimately change you for the better as well.

More like this
How This Founder Manifested Ariana Grande As A Brand Ambassador
By Dominique Norman
Target Dropped *Two* New Fashion Collabs With Queer-Owned Brands
By Dominique Norman
Here's How To Practice Self-Love In Small Ways Every Day
By Mackenzie Sylvester
What Is “Jello Skin”? The Latest Viral Trend To Know About
By Tomi Otekunrin
Get Even More From Bustle — Sign Up For The Newsletter