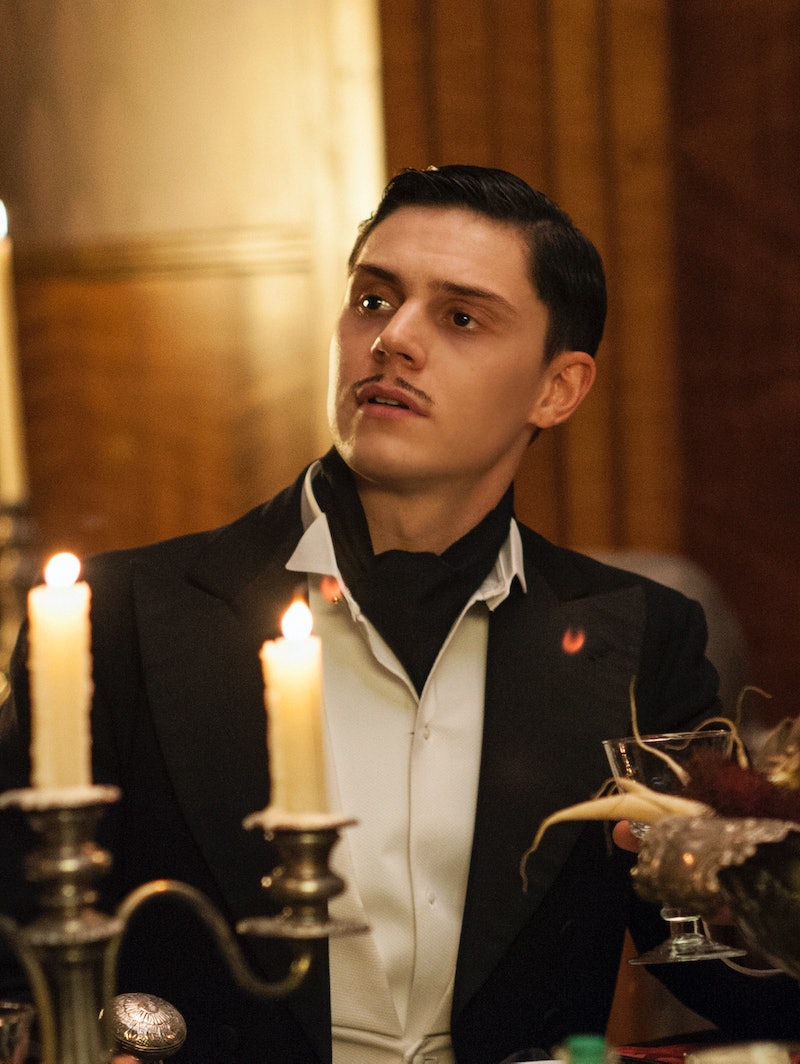 It's no secret that Ryan Murphy likes to push the envelope and take risks — and it often pays off. But in "Devil's Night," American Horror Story: Hotel glamorized serial killers by depicting a number of real-life criminals as being suave. This highly-anticipated Halloween episode was teased as a dinner party that would host some of America's most notorious killers. The guest list included Jeffrey Dahmer, John Wayne Gacy, Richard "Night Stalker" Ramirez, Aileen Wuornos, and the still-unidentified Zodiac Killer. Depicting real life killers requires both tact and sensitivity — unfortunately, this episode could have used more.

From the moment "Devil's Night" began, something felt off. The episode opened with Ramirez strolling into the hotel, clad in trendy sunglasses and basically looking like a bona fide rockstar. He committed a gruesome murder moments later — but he sure looked stylish while doing so. But, the dinner party itself is what truly made my skin crawl, and not in the way it was intended to. Ramirez was depicted as a suave guy — no big deal that he was convicted of brutally slaughtering at least 13 people and committing multiple sexual assaults before being apprehended. He jokingly criticized the Zodiac Killer for being uncool enough to give himself his own nickname — so apparently there's a social ladder when it comes to serial killers, and Ramirez is at the top.

Meanwhile, Aileen Wuornos provided cringeworthy one-liners that were tasteless rather than clever. As dinner was served, she joked that Dahmer (who is best known for cannibalizing his young victims) "only likes dark meat." While the families of victims probably choose not tune into gory shows like American Horror Story, they are still members of society who are likely to hear water cooler chatter and see headlines about this episode. I can't imagine how it would feel for the families of Dahmer's victims to learn that a TV show joked about his preference for dark meat — and then brought out an actual human for fictional Dahmer to devour on camera.

James March described the killers around the table as individuals who lived out his idea of the "American Dream" and praised them for being depicted in books and films, while Gacy bragged that Johnny Depp likes his paintings. Since Murphy frequently satirizes pop culture, many of the dinner party jokes were probably meant as a jab at society's obsession with killers — but, if so, they not only missed the mark but they also contributed to the problem. Even if it was inadvertent, Murphy humanized these killers and depicted them as "cool" and "witty" individuals who dance around to fun music in between committing atrocities.

It's not the same as having Lady Gaga inspired by a murderous Countess from the 1600s, Dahmer, Ramirez, and Wuornos were all active killers in the 1980s and 1990s — meaning many of their victims' families are still alive. If Murphy had wished to satirize society's fascination with criminals, he could have done so by inventing fictional serial killers for the show and then illustrating the media and the public's response to them. This is TV, after all, so he gets to do that.

Although some fans on social media seemed to enjoy the episode, many expressed that they were disturbed by the glorification of the killers:

Others pointed out that it was insensitive to the victims' families — and that it's troubling the killers are household names, but the actual victims have been forgotten by the media.

The glamorization of serial killers wasn't the first misstep Murphy has made this season. As reported by The Huffington Post, Murphy stated in August that the inspiration for Hotel was an actual surveillance video: "A girl got in an elevator in a downtown hotel. She was never seen again."

Since the Hotel Cortez is inspired by the Cecil Hotel, he is presumably referring to Elisa Lam — a young woman who died under tragic circumstances in 2013. The last time she was seen alive was by a surveillance camera in the Cecil Hotel. The footage showed Lam behaving erratically. Two weeks later, her body was found floating in a water tank on top of the hotel. Her death remains shrouded in mystery and conspiracy theories abound on the web — but her autopsy report clearly states that Lam's bipolar disorder was a contributing factor in her death. Reddit user AxelShoes, drawing from his own experience, explains that her behavior in the footage was consistent with someone suffering from a manic or mixed state episode. Regardless of how she ultimately ended up in the water tank, Lam's illness seems to be what put her at risk in the first place.

Mental illness is widely stigmatized, and the Cecil already has a highly storied past — so it was both unnecessary and tasteless to specifically call out the Lam case, especially when her family has refrained from speaking to the media at all. And I really, really hope that a future script doesn't feature a young woman found dead in a water tank at the Hotel Cortez — because Murphy has proven that he can't tactfully handle the depiction of a real-life tragedy.

Although I don't think drawing from real life crimes is inherently problematic, it's something that always needs to be handled extremely carefully. If actual serial killers are going to be depicted on TV, they need to be shown as they were — brutal, evil individuals who stole lives and left families irreparably devastated. There's a time and a place for artistic license, but it should never be used to glamorize a serial killer or turn a true tragedy into a tacky one-liner.